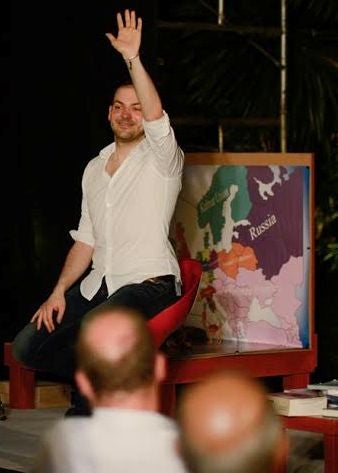 Lucas De Man performing at the Netherlands Embassy in Manila; he also brought his one-man lecture-performance to UP Diliman and UP Cebu. PHOTO FROM THE NETHERLANDS EMBASSY FACEBOOK PAGE

Lucas De Man took a 30-day journey through 17 cities in eight European countries in search of ideas that would shape Europe for the next generations. That’s the show he brought over to Manila recently and performed first before a by-invitation audience at the Netherlands Embassy, and then at UP Diliman and UP Cebu.

It is indeed a pivotal time for Europe to be asking fundamental questions about its way of life, as it struggles with social, economic, political and religious upheaval. Are there still academics, artists, philosophers, scientists, entrepreneurs, theater-makers and visionaries who see a way ahead for a continent and its people in these interesting times?

And do any of these ideas mean anything to us in our little former European colony all the way across the world?

Dubbed as a “Lecture Performance” and a “Reflection,” De Man’s work was academic yet highly engaging. He is a man of intense curiosity; in this show, he artfully navigated the intricacies of his subject with a charming Everyman persona.

Clever touches of technology and aspects of performance art kept the dialogue vibrant and fresh. He began his philosophical journey through the works of some of the finest thinkers of the Renaissance. De Man was captivating as he discussed how Erasmus, Copernicus, Martin Luther, Thomas More and Machiavelli envisioned society, politics and culture in Europe, and how their thoughts formed the way Europeans have lived in the centuries hence.

He illustrated these ideas and philosophies artfully through the use of Lego figures that he manipulated and projected on the big screen in real time.

But it isn’t just the ideas of visionaries long dead that De Man took us through. He also talked to a number of young modern Europeans who, through their projects and life choices, made us think about how we might live as we face the challenges of today’s world.

He met the curator of Metropoliz—an abandoned salami factory occupied by a community of 200 informal settlers who have turned parts of it into a modernist open art museum to protect the community from eviction. There was also a young theater-maker who, through his sociopolitical productions, said he does not work to make a better society, but simply “works to make a society.” And a young man barely out of college set up a citizen’s journalism network that has transformed the way news is shared in Turkey.

Through the delightful interplay of live dialogue and cleverly edited videos of these subjects appearing on screens onstage, De Man and his guests appeared to argue, banter and joke with each other through the lecture, with the audience often forgetting that this was a one-man show and the conversation was not happening in real time.

In the end, De Man walked us through the visions of young Europeans of the next world instead of a new world—a world far less utopian than their Renaissance forebears might have imagined, but decidedly more focused on smaller communities and societies that just work—along with the stories that tie them together.

And there perhaps is the lesson we can learn from De Man’s work. While we may not quite have the philosopher-visionaries in the European mold that De Man features in this piece, we are not short on stories of social entrepreneurship, social innovations—and the use of art to bring communities together.