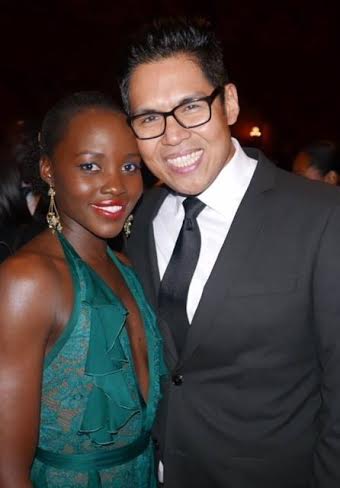 “I am very shocked, honored and humbled,” he says. “Even though I’ve worked hard to be the best designer I can be, I still don’t take anything for granted. This is a big deal and I know that, and I am very humbled by it.”

This is his first Tony nomination. Ramos’ set and costumes for the production have been described by critics as “meticulously detailed” (Variety) and “evocative” (Hollywood Reporter).

“Lupita is a creature of the stage and is unbelievably talented. It was an honor to work with her because she takes the work seriously. Although she is a style icon, she was willing to go to a grittier, more desperate, more broken down place in terms of appearance and she earned my deepest respect for it. She is an example to all young actresses out there.”

Ramos’ costumes mixed distressed T-shirts emblazoned with American pop-culture images, such as a shirt with Rugrats cartoon characters for Nyong’o, and traditional African fabrics such as lapa, woven cotton cloth with colorful patterns. Some characters were given brand-name footwear to show status.

“I buried myself in the research. The Liberian Civil War happened not too long ago and is one of the most photo-documented wars. I studied the characters that Danai Gurira had written and found examples of these ladies in those photos. I tried to replicate the looks,” he says.

Ramos discovered that Liberia is “a depository for America’s discards,” receiving donated secondhand clothing from Christian missionary groups. He also noted that soldiers would steal clothing or shoes from people they’d kill.

“I wanted to also highlight America’s involvement in that war and in that country through the vintage American T-shirts. They were a constant visual element in all those photographs of these women. I distressed them to the level of grittiness that was evidenced in those pictures.”

His costumes were cited by Vogue.com as “essential to helping piece together an identity that war has the potential to destroy.”

“It is wonderfully fulfilling to have played a part in shedding light on such a dark moment in immediate world history and to highlight the plight of a group of African women who are victims of war because, sadly, the story of these women is all too familiar to us and reappears in the exact form in almost every war-torn country in the world,” he says.

Born and raised in Cebu, Ramos took up theater arts at the University of the Philippines, doing design work for Dulaang Unibersidad ng Pilipinas, then a Master of Fine Arts in Design for Stage and Film at New York University’s Tisch School of the Arts on a full scholarship.

He has since designed costumes and sets for over a hundred productions in New York, across the US and internationally.

Recent credits include costume designs for the Broadway production of “The Elephant Man” featuring Bradley Cooper and the Off-Broadway musical about Imelda Marcos, “Here Lies Love,” for which critics praised his work as “vast and fabulous” (New York Times), “[providing] beautiful symmetry” (The Hollywood Reporter), and “top-notch” (New York Magazine).

Both these productions were also staged on the West End. “Here Lies Love” will be staged by San Francisco’s American Conservatory Theater in June 2017.

Ramos is multi-awarded, having previously received the 2013 Obie Award for Sustained Excellence of Costume Design, the National Commission for Culture and the Arts’ 2014 Ani ng Dangal Award for Dramatic Arts, and the 2014 Lucille Lortel Award for Outstanding Costume Design for his work on “Here Lies Love,” among others.

Upcoming projects include costume design for “Frozen: Live at the Hyperion,” a new musical based on Disney’s animated film, slated to open at Disney California Adventure Park in May 2016. (A separate Broadway production of “Frozen” with a different artistic team is scheduled to open in 2018.)

The Tonys will have its 70th annual ceremony on June 12.