When a clan marries off a well-loved son | Inquirer Lifestyle 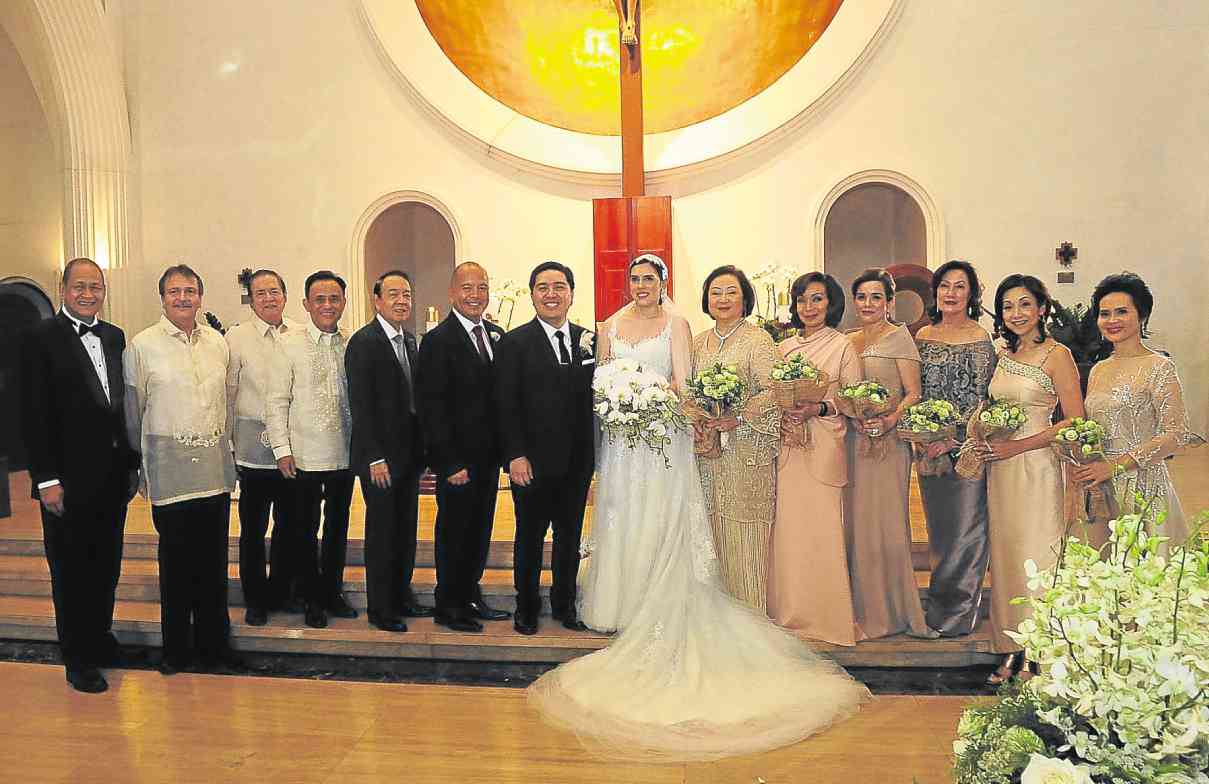 When a clan marries off a well-loved son

IF, as they say, it takes a village to raise a child, then one could say, in the same manner of thinking, that it takes a close-knit clan to marry off a well-loved son.

In this wedding, it was the whole clan that was fussing over the newlyweds.

At the onset of summer, that became so apparent in the wedding of Jose Miguel Tantoco to Isabella Rossi.

The young groom, “MJ” to family and friends, is one of the scions of  the country’s leading retail clan, and the bride, beautiful in a patrician way, is a friend from their high school days. Their paths didn’t cross until common friends set them up on a date.

Isabella is the daughter of Emore and Carmelita Rossi. MJ is the firstborn of Marilen Tantoco, who is one of the children of Rustan’s founders, the Ambassador Bienvenido Tantoco and Glecy. MJ grew up with his grandfather, who was a diplomat in Rome, and also in Morocco, where the family built a retail business. MJ is now involved in running the clan’s food ventures. He has two other siblings, Chris and Annika.

That early afternoon of February 19, at the quietly elegant St. Benedict Church at Ayala Westgrove Heights in Sta. Rosa, Laguna, the groom’s uncles and aunts started to stream in, not only to greet the groom and his mom, but apparently to check on how they were doing with the wedding details.

In her typical fastidious manner, Rustan’s president and SSI chair and CEO Nedy Tantoco asked younger sister Marilen about the physical arrangement in the church, and gave a suggestion or two. Marilen just basked in—actually tried to cope with—all that attention, and moved around nonchalantly in her blush-colored formal dress.

A most touching scene was the arrival of the Tantoco patriarch. Ambassador Tantoco  took the seat right in front of the altar, where the groom and his other young cousins took turns being photographed with their grandfather.

It is rather well-known how hands-on Tantoco has been as a grandfather. Not only has he coached his grandsons on the details of being fine gentlemen, but he was also not above having to source the flowers a grandson could give his date.

That early afternoon, he beamed like a proud grandfather marrying off the grandson who grew up with him.

The reception at Club 22 at the Sta. Elena Golf and Country Club had the same close-knit family atmosphere. The hall was filled with spring blooms. Guests had cocktails, enjoying the breeze which, thank God, materialized that early summer evening.

Long after the toasts had been offered and their friends and families had shared their recollections of funny/poignant moments with the newlyweds, it was most touching how MJ e-mailed us about his mother, Marilen: “My mom and I understand each other, at the mother-son level, but also as friends. I respect my mom for all that she is—she is down-to-earth, very simple and easygoing. We have a special, different relationship (my mom gets that!) and that’s what I love about her, us, and our family.”

Son Chris agreed: “My mom and I share an indescribable love for each other. She has a special relationship with each of her children and that’s the best part about my mom. I love you mom!”

Coming from sons, one of whom just took a bride, that’s music to any mother’s ears, on a wedding day, and most especially on Mother’s Day.