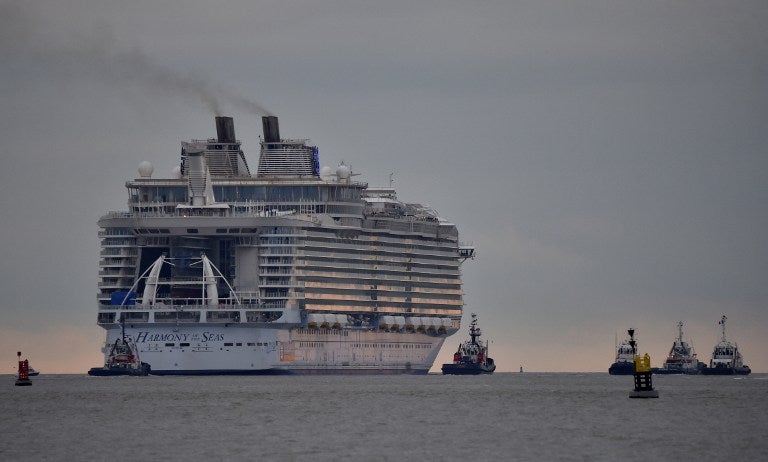 SAINT NAZAIRE, France — The world’s biggest-ever cruise ship, the 120,000-ton Harmony of the Seas, capable of accommodating more than 8,000 passengers and crew in the most luxurious conditions, was set for delivery on Thursday from a French boatyard.

At 66 meters (217 feet), it is the widest cruise ship ever built, while its 362-metre length makes it 50 metres longer than the height of the Eiffel Tower.

The immense floating town, which cost close to one billion euros (dollars), has 16 decks and will be able to carry 6,360 passengers and 2,100 crew members.

The ship was built for the US-based Royal Caribbean Cruises Ltd (RCCL) by the STX France boatyard in Saint-Nazaire on the Atlantic coast. A ceremony was to mark the official handover on Thursday.

Harmony of the Seas will leave the port on Sunday, weather permitting, for Southampton in southern England. From there, it will embark on for its official maiden voyage on May 22 to Barcelona.

RCCL already operates two giant sister liners to the Harmony of the Seas called Allure of the Seas and Oasis of the Seas. They are only marginally smaller than the new ship.

Among the onboard attractions are “The Ultimate Abyss”, a 10-storey slide from the top deck to the boardwalk which RRCL bills as the world’s biggest ship-mounted slide. The purple slide can be clearly seen at the rear of the ship.

Two robot barmen will serve passengers in the “Bionic Bar”.

The ship even has its own high street, and a “Central Park” deck featuring 12,000 plant species.

After its maiden voyage, it will dock in its new home port of Barcelona a week later, after which it will begin regular cruises through to late October.

It took 2,500 workers at STX France a total of some 10 million work-hours to complete the enormous vessel after work began in September 2013.

The contract marked a major boost for the boatyard after several lean years.

STX has built 120 cruise ships over its 150 years, and has another 11 lined up for the next decade.

RCCL has already ordered another sister ship of the Harmony to join its fleet in 2018.