‘An oasis of brave new works’: 12 new plays on the 12th year of the Virgin Labfest | Inquirer Lifestyle ❮ ❯ 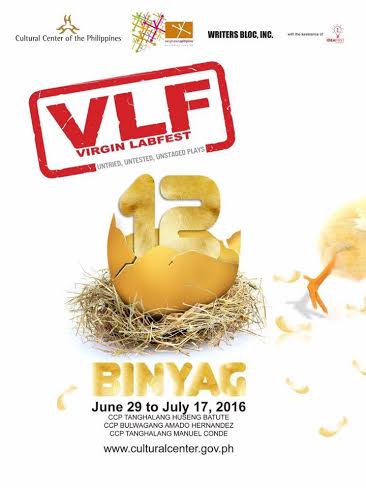 ‘An oasis of brave new works’: 12 new plays on the 12th year of the Virgin Labfest 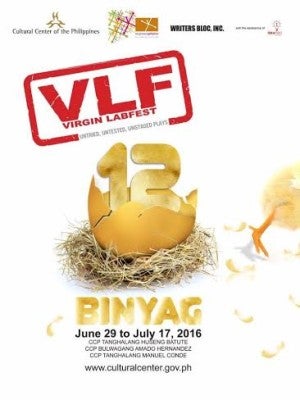 It was here that “Imbisibol,” winner of Best Picture at the first Sinag Maynila Film Festival, and “Gee-gee at Waterina,” finalist at the 2006 Cinemalaya Independent Film Festival- Short Film category, first proved the mettle of their material as one-act plays written by Herlyn Alegre and Dennis Teodosio, respectively.

This incubator and hatchery for playwrights and plays is none other than the Virgin Labfest (VLF), the annual theater festival of “unpublished, unstaged, untested and untried works” that’s been staged for 12 years now by the Writer’s Bloc Inc., Tanghalang Pilipino and the Cultural Center of the Philippines (CCP)  in cooperation with the National Commission for Culture and the Arts.

This year, Virgin Labfest unveils a lineup of 12 new one-act plays as well as three “revisited” plays from last year’s edition, plus staged readings and “fragments” from other submitted works (see sidebar below for complete lineup). The festival runs for two weeks, June 29-July 17, at CCP’s Tanghalang Huseng Batute.

For its 12th year, the Virgin Labfest’s theme is “Binyag/Baptism.” Tuxqs Rutaquio, festival director for the last five years after having taken over the role from founding festival director Rody Vera, says, “Six from the main lineup are virgins—first time to write for the Virgin Labfest. For example, we have one science-fiction
novelist, Eliza Victoria, and then we have creative writing majors from Ateneo and UP [University of the Philippines], Alexandra Cordoso and Socrates delos Reyes. It’s also interesting that we have a poet, Macky [Ma. Cecilia de la Rosa].”

Three of this year’s Labfest entries will now be guaranteed staging as full-length plays by the CCP’s resident theater company, Tanghalang Pilipino.

“The Virgin Labfest has been adopted by Tanghalang Pilipino as part of its season,” says Rutaquio. “For next year, there will be three chosen for the Revisited section, and Tanghalang Pilipino will mount these into full-blown productions. Those three are assured. That’s always been the goal of Rody [Vera], that these plays are adopted by theater companies into full-blown productions.”

A number of Labfest one-act plays, such as “Imbisibol,” have germinated and blossomed into films that film showings and readings of the original text will also be part of the Labfest.

“There are four or five films to be shown before the 8 p.m. show. So we’re working on readings of the original text just before the film. Hopefully we can get the original cast again to do the readings,” says Rutaquio.

Since its inception 12 years ago, Virgin Labfest has been instrumental in helping build the theater renaissance that Filipinos enjoy today, as well as the indie cinema movement that is helping resuscitate the local movie industry.

Rutaquio recalls, “Back then, no one was creating new works much. We were surprised that university theater companies were still staging decades-old Palanca plays.”

More than a laboratory for new works, the Virgin Labfest has also served as a unique venue for one-act plays.

“It’s a tough discipline because it needs to be concise and sweet,” adds Rutaquio. “Others can get too used to one-act plays and no longer write full-length, and for a time it was always the usual suspects that got into the Labfest. So we challenged them to go on to the next level. There was a period when we presented one full-length play per edition, but we stopped because we found that it was crowding out other playwrights and plays.”

Millennial playwrights and audiences have their own preferences, Rutaquio observes.

“The play needs to be faster because of their attention span, and they’re more interested in very complicated stories, like incest for example, or very gory violent stories. A recent play he collaborated on “tackled political dynasties. I was surprised that they were so mature—their mind frame in terms of what they want to see on stage.”

The Labfest “is really  an oasis of brave new works, really bold. There’s freedom to do what you want, of course within the boundaries of the vision of the playwright. Now it’s the mind of the millennials we’re seeing more and more. It’s an exciting time for Philippine playwriting.”

Tickets to Virgin Labfest 12 are available at www.ticketworld.com.ph and at the CCP box office. The festival runs June 29-July 17 at Tanghalang Huseng Batute, CCP.