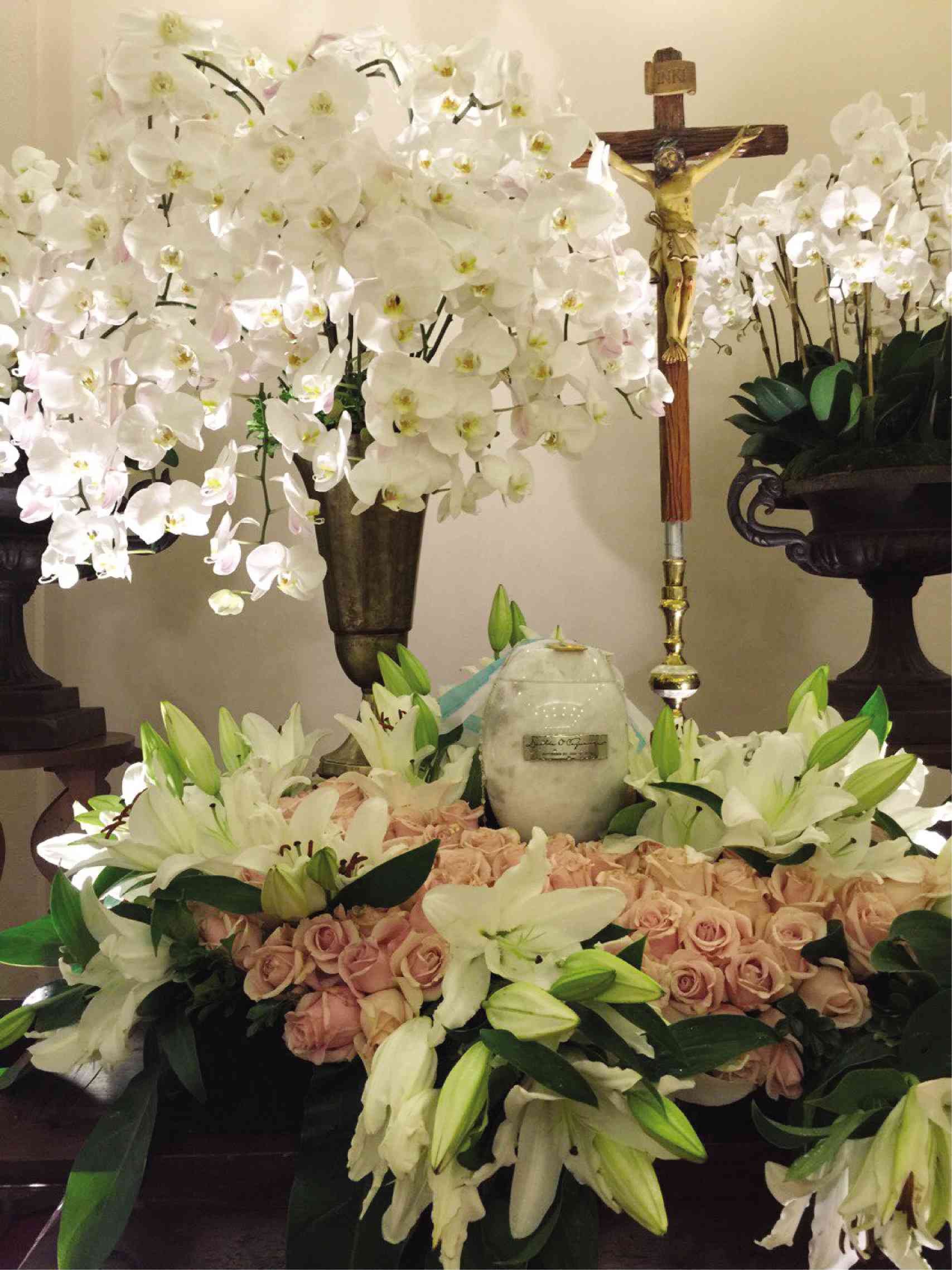 She’s the last. They’re all gone,” Mark Higgins whispered to me mournfully at the door of the Heritage chapel, as he was coming in and I was going out.

He was referring to Imelda Cojuangco and that breed of the country’s ultra-glamorous women—the icons in every sense of the word (different from the usage of term as mere marketing hype for today’s “It” girls)—who would bring everyone to a standstill as they entered the room, because all eyes would be focused on them, taking them in, from head to foot.

“But who else is there? Chito Madrigal (Collantes) died years ago,” Mark continued. (Higgins is the son of Salvacion Lim Higgins of the fashion institution Slim’s. Mrs. Cojuangco wore Slim’s clothes famously.  Salvacion died in 1990.)

I couldn’t think of names right there and then, but looking back, I could have told Mark, “Imelda Marcos.”

Imelda Marcos was just at the wake last Wednesday to pay her last respects to her namesake and best friend Blue Lady (one of them), Imelda Cojuangco. To the power-society-watchers of the ’70s and ’80s, the two Imeldas were intertwined—in beauty, style and glamour, wealth and power, and high-society gloss and charisma.

If Imelda Marcos was around, “Meldy Co,” as Mrs. Cojuangco was known to society circles, couldn’t be far behind—the most iconic of the Blue Ladies (as Mrs. Marcos’ coterie of high-society women was known, her potent campaign tool), and of course, Pitoy Moreno and Dr. “Teyet” Pascual as the “honorary Blues.” (This changed after the 1986 Edsa Revolution.)

However, last Thursday night in the funeral chapel, I felt truly sad, not for a glamour icon, but for a woman I have truly come to admire and love. Meldy Co. was one of the most exceptional women I’ve covered.

While others saw only her beauty, style and glamour—her drop-dead drama clothes—I saw a lot more, underneath all that, for I was fortunate enough to interact with her many times, through the highs and lows of her semi-public life. She gave me access, and with me, she was pretty candid.

That fragile woman was, in fact, a woman of steel who knew how to relate to people, and could make them do her bidding.

One of my most treasured experiences was having spent an overnighter with her and her longtime friend/assistant/lady-in-waiting Marietta Santos when they had a  retreat with the not-so-united members of the Forbes parish council. It was there that I saw how she could wield her clout to unite them.

Marietta was at the Heritage chapel that night, wheeled onto the front of the room, right before the elegant altar of phalaenopsis on which nestled the pearl white urn bearing the remains of her beloved friend.

“She was my soul mate,” Marietta told us, and I could believe that. She’d remained faithful to Meldy Co. to the end. She would be wherever Meldy Co. was—wherever; and for a time, Pitoy was with them. (Pitoy remains bedridden in the hospital, not in a coma, but just being taken care of.)

“I didn’t know she would go. She was up and about,” Marietta spoke of Meldy Co.’s last days. “In fact, I told her we could use the yacht of the Kuoks so I could bring her to Boracay and see the island.”

Listening to Marietta, I wasn’t sure if she was just wishing out loud or talking of an actual plan.

But I told her what Meldy Co. told me over lunch more than a year ago. Meldy Co. was half-laughing when she said, “I told Marietta, why don’t you like to go out now? At least let’s go out once in a while. Hindi ka naman mapapagod, kasi we’re in wheelchairs. So what if we’re in wheelchairs?”

I laughed as I heard her talk that way; she was so candid and almost making fun of her glamorous image.  That was Meldy Co., particularly in her autumn years, soft-spokenly very frank.

Marietta and Meldy Co.’s children recalled her last day, last Tuesday; she didn’t act as if anything was wrong. She gave a drawn-out cough, and the signs of life vanished that noon. Her household tried to rush her in an ambulance to the hospital.

Imelda Ongsiako-Cojuangco died Tuesday, May 10, 2016, apparently of a heart attack. Her heart stopped two days after Mother’s Day, which she spent with her children. It was a peaceful death, a blessing which she must have truly deserved, having led a quiet life of prayer, especially in her autumn years.

She went to Mass every day. Our columnist, Fr. Tito Caluag, would say regular mass for her. Among my keepsakes were the stampita prayers and the hardbound New Testament she gave  to mark her proclamation as the Dame of the Order of St. Sylvestre by the Vatican some time ago.

She had survived multiple aneurysms a long time ago, and I remember her recalling to me how she attributed her recovery to the visit of a Korean nun-healer. “My room was filled with the scent of roses. It was a miraculous moment,” she told me of the hospital visit.

If the turnout of mourners at the funeral wake last Wednesday and Thursday was an indication, Meldy Co. was indeed well liked, if not well loved. It wasn’t just business clout—the family had long given up PLDT (“I tell people it’s not that easy any more to help them raise funds,” she told me years ago about her many religious and social projects). I’ve been to funeral services of some tycoons and high-society figures, but this one remained exceptional. It was more than that of a glamour icon.

The crowd was enough to fill all the chapels of one wing of Heritage. Her children, Tonyboy, Marvie, Choy, Ningning, Mikey, attended to the mourners that cut across sectors of society, from politics, business and industry to the arts.

Seated close to the altar at the wake were Imelda’s sisters, former Rep.  Carmencita O. Reyes and Miriam O. Montelibano.

To me, her death marks the passing of an era, which I have enjoyed covering.

But beyond that, I will miss Meldy Co.