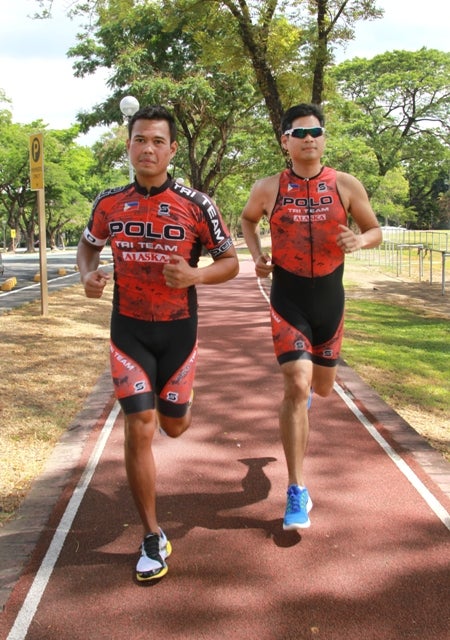 How triathletes with day jobs are preparing for Ironman Barcelona

Living in Muntinlupa, 33-year-old bachelor Miguel Mallillin wakes up before dawn, goes to Manila Polo Club (MPC) and takes a bike route to Heritage Park. By 7:30 a.m., he gets ready for work and drives to the office in Ortigas.

On weekends, he and his friends bike to Tagaytay, Batangas, Antipolo, San Mateo and other popular cyclist routes.

Meanwhile, Makati executive Noel dela Merced is lucky that home, work and the MPC are just three kilometers apart. He gets up before 5 a.m. and trains at MPC till 9 a.m.

After office hours, he comes home to bond with his family and goes to bed early to be fresh for the next day’s training—a minimum of three hours of biking or two hours of running or 90 minutes of swimming.

“People think it’s crazy,” says Dela Merced. “We’re averaging 277 km a week. We get more mileage on the bike than riding a car.”

If triathlon training is gruelling for pro athletes, it is more so for people with day jobs.

Most Polo Tri Team members exert great effort to balance work and family life with the discipline of the sport. Mallillin is the business development manager for the concierge and customer services-oriented Aspire Lifestyles.

They are joined by other members. José Moreno works in a brokerage firm and manages the family funds. Andy Aguila is director in the family business, Aguila Glass, while David Almendral is an entrepreneur, specializing in garments and accessories related to endurance sports.

They’re all preparing for Ironman Barcelona in the seaside town of Calella on Oct. 2. The daylong event consists of a swim in the Mediterranean Sea and biking and running along the coastline.

Although the Philippines is gaining an international reputation for its half Ironman in Cebu, enthusiastic triathletes travel overseas to compete in the full Ironman, which consists of a 3.86-km swim, a 180.25-km bicycle ride and the standard 42.2-km marathon run.

Each race must be accomplished within a time frame and completed in less than 17 hours.

Still boyish-looking at 49, Aguila has joined several Ironmans. A year after his first triathlon in Subic, he signed up for Ironman Switzerland in 2004. He has since joined five Ironmans in Australia—Port Macquarie, Forster-Tuncurry, Cairns, Melbourne and Western Australia—and has also competed in  Germany, New Zealand, Lake Placid in New York and Arizona.

His personal best was Ironman Germany, where he clocked in 11 hours and 36 minutes. “Back then, I was training 16 hours a week. I did long rides,” recalls Aguila.

In Frankfurt, he had a good bike time of 5.3  hours, when the mandatory time limit was eight hours and 10 minutes.

“After the base work, I have more speed coming in,” he says. “I do intervals of short but fast runs, and short but fast bikes. I pump up the volume by June with longer rides, longer runs and longer swims. Two months before Ironman, the volume goes down and the speed comes back. Two weeks before the race, you start tapering off, just to keep the body fit.”

He’s lost his appetite for bacon and steak and favors chicken, rice and pasta. “I still drink a glass of wine with the meals,” he says.

Among the five, Almendral holds the fastest record of 11:04 which he achieved in Ironman Melbourne. “The course suited me,” he says. The courses for the bike and run were relatively flat and he was more than prepared.

He has joined three Ironman events in Australia—Port Macquarie in New South Wales, Cairns in Queensland and Melbourne—as well as Ironman Arizona.

Despite his prowess, Almendral has had his traumas. While running in Ironman 70.3 Camsur in 2010, his hips were inflamed. He consulted orthopedic sports doctor Mark Castro.

Almendral then underwent surgery at the Steadman Clinic and rehabilitation at Howard Head Sports Medicine, both in Colorado.  It took a year before he regained his speed.

He has a second hip surgery last summer. Three months later, he competed in the Ironman 70.3 in Cebu.

Despite the setbacks, Almendral is committed to triathlon for as long as his body will allow. “Getting injuries, fixing them and getting over them—I expect those,” he says.

He will undergo surgery for an ankle spur and train in time for Ironman Barcelona. “After recovery, I will be able to do Barcelona even if my time isn’t what I want it to be. I’m just happy to be in the race.  There’s always another race where I can work on having better time,” he says.

Asked what drives him to make Ironman part of his lifestyle, Almendral explains: “When I have a race in mind, it helps organize my life. You have to tighten your schedule. You can’t slack in life. It makes you more efficient at work. I value time with my family even more. With a goal in mind, it puts everything in order.”

While studying in high school in Japan, Moreno was the fat kid who  hated running. He once cheated in his physical education class by taking a cab to the finish line.

After college, he got into sports when his younger brother, Raymond John, a member of the Polo Tri Team, inspired him. Moreno started with running in relays, but felt something was lacking. “There was no camaraderie. You start alone and end alone,” he says.

He got exposed to the triathlon subculture at the Cebu Xterra, where he joined the 10k-trail run relay. Fascinated by the confluence of three sporting events, he then bought a bike.

He is challenged by the transitions for each sport, from getting out of the swim to donning the bike attire and getting into his spot, making sure he didn’t leave anything out. “You make sure that your gear is in place. You put on shoes, the cycling helmet, and take the proper nutrition.” he says. “If things go wrong in the transition, things could mess up. Fixing them will eat up your time.”

Each race has its challenges. “It’s called the washing machine when the swim race begins. You’re with a thousand people, and you get elbowed and kicked. Everyone is fighting for position. Some will drag you down. It’s the portion when the heart rates pump up.”

In the bike race, the cyclist can run into a mechanical problem and get sidelined if it’s not fixed on time. Then again, running is tough on the joints. Aside from pushing physical limits, mental endurance is tested.

“The hardest part of training is getting up at 5 a.m. But once you’ve put on your shoes, you’re ready to start your routine.”

In his youth, Mallillin had a sedentary lifestyle and carried extra pounds. His father urged him to swim and got him into a daily routine. One day, he met Almendral, who encouraged him to try a short-distance race. He started in Alabang and got hooked on triathlon. He has since joined races in Subic and Cebu and entered his first Ironman in Cairns in 2013.

In Australia, he swam in cold water and pedaled uphill and downhill on steep ascents and dramatic descents, similar to the roads in Nasugbu. Every five minutes the weather would change from sunny to drizzling to windy and cold. Still, he clocked in 12 hours and 14 minutes. He also enjoyed seeing natural wonders such as the Great Barrier Reef.

Mallillin is looking forward to Barcelona. “I want to enjoy the weather, the beach and the tapas bars. It’s a celebration that caps our months of training.”

Ten years ago, Dela Merced got initiated into triathlon in an event in Alabang. For the past six years, he has been joining the Ironman 70.3 races in Camarines Sur and Cebu.

program for him. Dela Merced is setting  a realistic goal of finishing his first Ironman in 14 hours.

Like most triathletes, he’s been veering away from sugars, bad fats, carbohydrates and processed foods, and favors boiled and grilled foods. “You take in proper nourishment for the body as you would put quality oil and fluids in your car,” he says.

Dela Merced plans to lose at least 10 pounds in the first three months of training while keeping some calories for energy. During training, he sucks on energy gel or bites tiny peanut butter sandwich slices every 15 minutes.

With all the training and sports accessories, it may seem as if triathlon is an expensive sport.

Dela Merced points out that some triathletes have sponsors or patrons. Financially independent professionals can invest  as much as P200,000 for a bicycle, and spend P200,000 for coaches, sportswear and accessories,  700 Euros to register for Ironman Barcelona and $2,000 to fly business class.

Aguila points out, “The longer you stay in the sport, the more you know how to spend and what not to spend.”

Still, Almendral maintains that triathlon need not be expensive. “You can get into it for  not as much as some people would spend. It’s not an exclusive sport,” he says. “You can’t put a price on what you get out of triathlon. It’s nice to invest in your hobbies. It helps to keep you involved.”

In the end, triathlon creates camaraderie and passion for life, both of which can’t be bought.