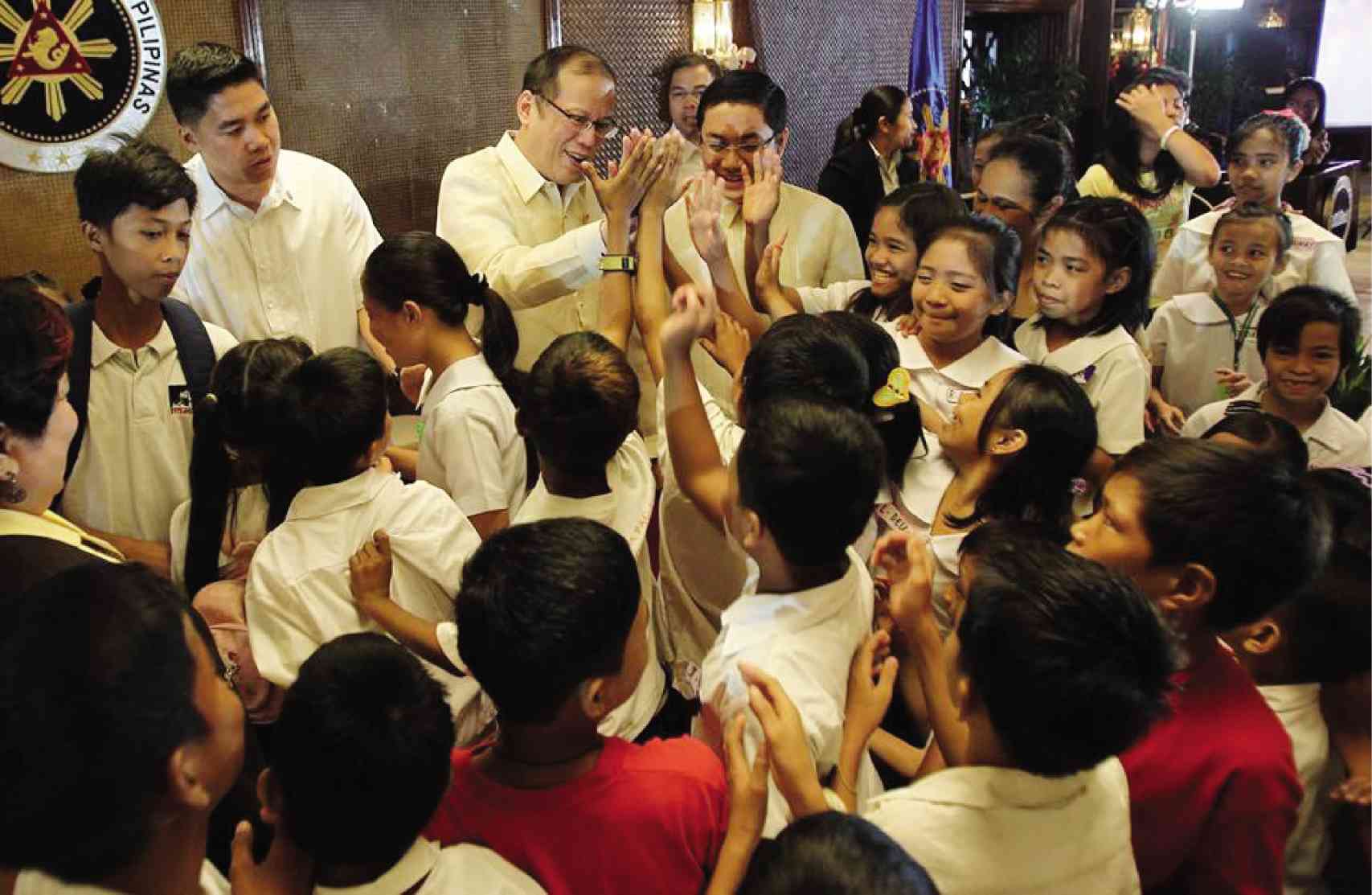 “This law is designed to create a comprehensive and extensive plan to ensure that the welfare of the Filipino child who is affected by calamities, emergencies, and other unexpected incidents is well taken care of. We all know: in times like these, it is the young people who are most vulnerable,” President Aquino said in Filipino.

The law is described by the Save the Children organization as the “first of its kind in Asia, and establishes a new global standard for accountability to children.”

“This legislation provides specific legal protection to children, it ensures that children have targeted humanitarian intervention, and that government services and communities are better prepared for future disasters,” said Ned Olney, Save the Children country director, who attended the ceremony at Malacañang.

Olney added, “We urge the next Philippine administration to support and fast-track the drafting of Implementing Rules and Regulations of this important legislation before the typhoon season begins.”

President Aquino looked upbeat that day, not showing any sign of sadness or defeat after the overwhelming victory of Davao City Mayor Rodrigo Duterte over administration candidate Mar Roxas.

Mr. Aquino looked happily at the group of small children who witnessed the signing, with one young boy particularly catching the President’s attention for his solemn demeanor throughout the ceremony.

“He is the smallest and the most serious today. Look at him, even his applause is really for all intents and purposes,” the President said with a smile, referring to the boy who was seated on the third row.

The children later had their photos taken with President Aquino, a bachelor at 56 who is known to dote on his nephews and nieces.

With 43 days left before his term ends, President Aquino emphasized that up to the final moments of treading on the straight path (Daang Matuwid), he and his administration continue to fulfill their promise: “That is to bequeath to future generations a Philippines that is clearly in better shape than before.”

According to the President, the provisions in the law he signed yesterday are already included in the government’s Disaster Risk Reduction and Management Strategy.

“However, the point of the law is to formalize the steps and processes; strengthen the different government sectors; and make their tasks and responsibilities clearer,” he said.

President Aquino also stressed that the law is designed to be the foundation and norm when it comes to the protection of the Filipino child, whoever is in power in government.”

According to Save the Children, the law ensures that the Department of Social Welfare and Development (DSWD) and the Office of Civil Defense (OCD) lead other agencies in crafting a Comprehensive Emergency Program that will protect and support the children’s immediate recovery.

The law also mandates heightened surveillance against child trafficking and other violence against children in the aftermath of disasters and calamities; provides a system of restoring civil documents for children and their families to better access services and protect against exploitation; ensures less disruption of education activities with the reduced use of schools as evacuation centers and the proper use of temporary learning spaces; and have improved care and steps for family tracing and reunification for unaccompanied and separated children.

President Aquino also emphasized the implementation of a child-responsive training program for all responders in calamity-struck areas.

“All these have only one objective: to have peace of mind and heart. What we want— whether I am on Times or in Tarlac as a private citizen, or for parents who work hard everyday for their families—is when calamities, disasters, or emergencies happen, we have peace of mind because we know government is there, focused on the lives and welfare of their children and the Filipino youth,” the President said.