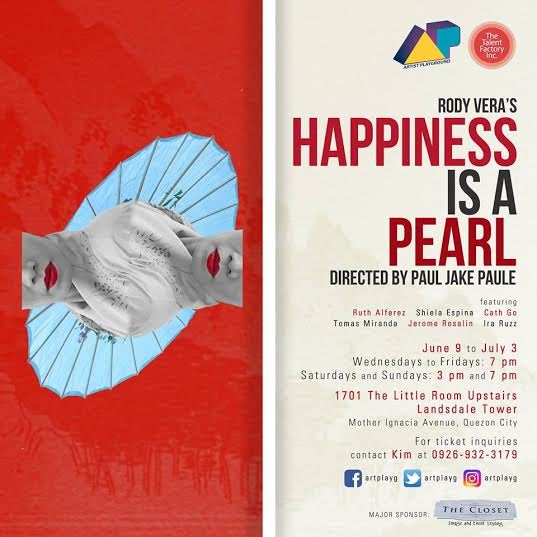 Some like it short and small: Artist Playground stages intimate plays At a club in Tokyo, Mari, the wife of a billionaire, becomes attached to Kenji, a gigolo who has a pearl stitched under the skin of his genitalia. However, Kenji is falling for Maria, a japayuki from the Philippines.

Artistic director Roeder Camañag says, “Last year, while brainstorming our season lineup, Rody mentioned this play that he wrote years ago. I found the story unusual, and it fits with our thrust to stage one-acts.”

Vera got the idea for the story by way of Singapore when he was there collaborating with Japanese group Black Tent Theatre. One of his co-actors had shared a story with him about the wife of one of the richest mochi magnates in Tokyo and her affair with a gigolo. Vera was able to build a fictional story on that premise, transforming it into a love triangle.

“It has never been staged before; we will premiere it,” says Camañag.

Directing the play is Paul Jake Paule, whose recent acting credits include “Mga Kuneho” and “Balunbalunan, Bingibingihan” for Virgin Labfest, “Ang Oresteyas” for Tanghalang Ateneo, and “The Pillowman” for Egg Theater Company.

Mari will be played by Ruth Alferez, who has performed with Tanghalang Pilipino, Philippine Educational Theater Association and Repertory Philippines, among other groups.

The rest of the cast will be filled by members of The Players, the company’s pool of resident actors. Cath Go alternates as Mari, Jerome Rosalin alternates as Kenji, while Shiela Espina and Ira Ruzz alternate as Maria.

AP was founded last year, evolving from a summer acting workshop that Camañag and his cohorts had organized.

For its second season (2016-17), AP will focus on one-act plays. “We want our audiences to have a different theater experience,” Camañag says.

“We want to introduce the idea that you can watch a play that won’t eat up too much of your time and won’t cost too much. Kind of like, say, for the same time and amount of money if you went out for an iced coffee, you can experience a play.”

Camañag also points out that their venue, 1701 The Little Room Upstairs, is an intimate space that seats only 30. All the more to allow audiences to immerse in the worlds their company creates for audiences.

Its location near the corner of Timog Avenue provides audiences with various choices of restaurants, bars, beauty salons and spas to go to before or after AP shows.

The second play for this season will be Dan Hollanda’s “Lagablab,” a play loosely based on British writer W. Somerset Maugham’s short story “The Unconquered.” In it, Japanese general Hirohito rapes then falls in love with Chayong, a Filipina who despises him. Paule will direct as well.

Also planned for the season is Dennis Teodosio’s “Geegee at Waterina,” a fictionalized conversation between two characters based on Justo Justo, founder of the Home For The Golden Gays, and Walter Dempsey Jr., more popularly known as Walterina Markova, a sex slave during the Philippines’ Japanese occupation. Camañag is slated to play Waterina.