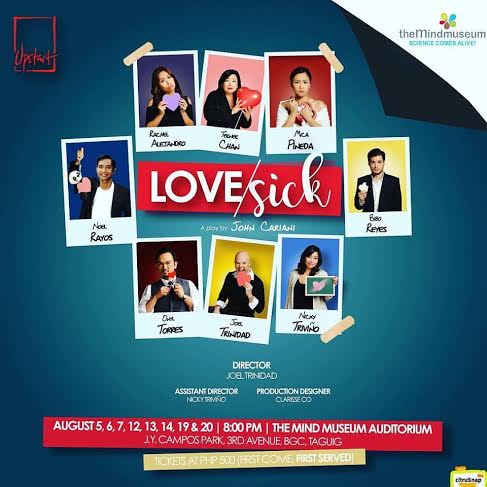 “Happiness is a Pearl” is the story of the intertwined fates of Kenji, a male courtesan; Maria, a poor Pinay japayuki; and Mari, who falls in love with Kenji. Directed by Paul Jake Paule, it stars Ruth Alferez, Tomas Miranda and The Players, the Artist Playground’s group of artists.

MusicArtes presents “Godspell” from June 17-19 and 24-26 at the Carlos P. Romulo Auditorium of RCBC Plaza, Makati City, under the direction of Dr. Anton Juan.

“Godspell” was the first musical hit of Stephen Schwartz, who would go on to write “Pippin” and “Wicked.” MusicArtes’ production has musical direction by Ejay Yatco.

“Rak of Aegis” has libretto by Liza Magtoto, musical direction by Myke Salomon and direction by Maribel Legarda. It runs Tuedays to Sundays beginning June 17 until Aug. 28.

Basti Artadi returns to musical theater to lead a cast of rock performers and theater thespians, among them Jason Fernandez and Norby David, both formerly of Rivermaya; Miggy Chavez of Chicosci; and, from musical theater, Nel Gomez, Yanah Laurel, Alex Godinez and “Miss Saigon” alumni Ariel Reonal and Ela Lisondra, among others.

Twelve new one-act plays are once again showcased in the 12th edition of the Virgin Labfest, the annual drama festival of “unpublished, unstaged, untested and untried works” jointly run by the Writer’s Bloc Inc., Tanghalang Pilipino and Cultural Center of the Philippines (CCP), in cooperation with National Commission for Culture and the Arts, and held at CCP’s Tanghalang Huseng Batute. 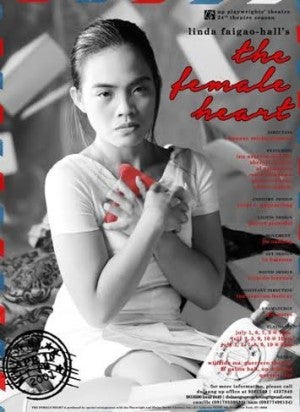 Written by Linda Faigao-Hall and directed by Banaue Miclat-Janssen, “The Female Heart” is the comeback production for UP Playwrights Theater after a hiatus of three years. The story is about a woman living in Smoky Mountain who is forced by poverty to become a mail-order bride in the United States. 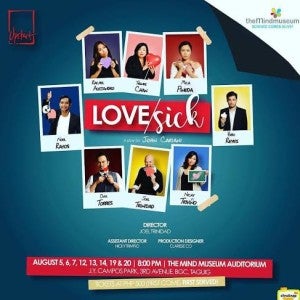 Joel Trinidad directs the Philippine premiere of John Cariani’s “Love/Sick,” a play consisting of nine vignettes that examines various kinds of romantic relationships, from first love to couples on the brink of divorce. The New York Times has hailed the play for its “easy-going laughs and snark-free cleverness…”