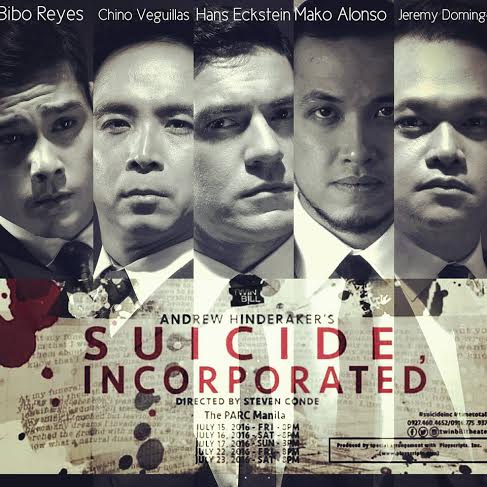 From Twin Bill Theater, a dark comedy on suicide

The group is tackling the morbid subject matter not just because it is challenging “the taboo that is attached to suicide in the Philippines”, but also to allow audiences to explore the related topics that surround it.

And if there are doubts about the macabre premise, the DC Metro Theater Arts website’s review of the play states, “It’s often quite hilarious, and the farther we get in the process the more the humor starts to shine.”

“Beyond suicide, the play is ultimately about redemption and restoration,” says director Steven Conde.

This is the second production in TBT’s current season to deal with suicide. Its staging of “Dog Sees God” a few months ago also had a character who commits suicide.

“Twin Bill’s theme for the year focuses on the power of redemption,” explains Conde. “This is what’s similar between both plays. Both plays deal with suicide in different ways but both talk about hope and restoration.

“‘Suicide, Incorporated’ has a strong message: that taboo topics such as mental health, much like any other life condition, must be talked about, understood and dealt with head on.”

In a Facebook post, Conde wrote, “I grew up with the notion that going to a psychiatrist for help meant you were crazy. And that being crazy is bad and needed to be kept secret from others. Thank God that I have met people who have opened my eyes to the less popular opinion that seeking help from a mental health professional is not a bad thing.”

Audiences are welcome to join the guided discussions after each show with invited experts such as psychiatrists.

There are plans to tour the production. Twin Bill Theater is accepting inquiries and bookings from colleges and other organizations that would like to host shows.

If you are or know of anyone in emotional crisis and in need of immediate assistance, contact Hopeline, available 24/7, at 8044673 or 0917-5584673 or approach any healthcare professional.