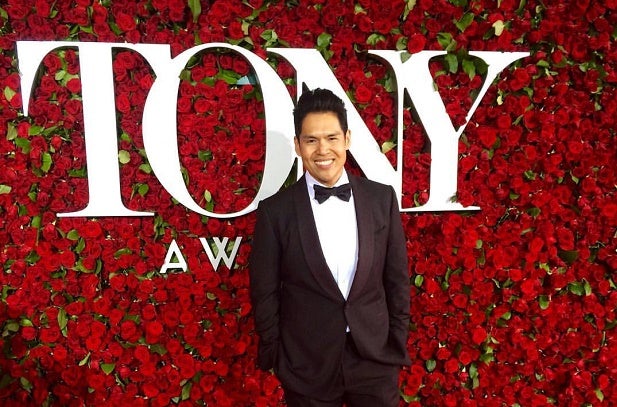 “I just want to say thank you to everybody, to a group of women who are unbelievable,” he said in his acceptance speech, a part of which was shown during the broadcast (still ongoing as of this writing), referring to the playwright, director and cast of the play, who are all women.

Ramos’ work has been described by critics as “meticulously detailed” (Variety), “evocative” (Hollywood Reporter), “[takes] much research, labor, and talent to pull off,” (Vanityfair.com) and “essential” (Vogue.com).

In a previous Instagram post, Ramos had written that the nomination means, “Work like this is valid. That design dealing with contemporary themes is worthy of rewarding. That powerful, modern costumes are just as complex as the pretty period ones.”

The play is about five women during the second Liberian Civil War. Written by Danai Gurira and directed by Liesl Tommy.

Ramos’ costumes combined traditional African fabrics like lapa, woven cotton cloth with colorful patterns, and T-shirts emblazoned with American pop-culture images, such as a shirt with Rugrats cartoon characters for Nyong’o (to show that Liberia is a repository for American discards). Some characters were given brand-name footwear to show status.

He researched photographs of the war and sourced shirts and fabrics in vintage clothing shops and African merchandise stores in New York.

Copies of ready-to-wear tops and bottoms that were chosen for the production were recreated from scratch: shirts were silkscreened and jeans were tailored to accommodate being used multiple shows a week and for different cast members.

Born and raised in Cebu, Ramos took up theater arts at the University of the Philippines, doing design work for Dulaang Unibersidad ng Pilipinas, then a Master of Fine Arts in Design for Stage and Film at New York University’s Tisch School of the Arts on a full scholarship.

He has since designed costumes and sets for over a hundred productions in New York, across the US and internationally.

Ramos’ most recent costume design work is for “Frozen: Live at the Hyperion,” a musical based on Disney’s animated film showing at Disney California Adventure Park. (A separate Broadway production of “Frozen” with a different artistic team is scheduled to open in 2018.)

Other credits include costume designs for the Broadway production of “The Elephant Man” featuring Bradley Cooper and the Off-Broadway staging of “Here Lies Love.” Both these productions were also staged on the West End.

“Here Lies Love,” a musical about Imelda Marcos, will be staged by American Conservatory Theater in San Francisco next year.

Ramos is multi-awarded, previously receiving the 2013 Obie Award for Sustained Excellence of Costume Design, the National Commission for Culture and the Arts’ 2014 Ani ng Dangal Award for Dramatic Arts, and the 2014 Lucille Lortel Award for Outstanding Costume Design for his work on “Here Lies Love,” among others.

The Antoinette Perry Award for Excellence in Theatre honors theater professionals for distinguished achievement on Broadway. It was founded by the Broadway League and the American Theatre Wing, after whose cofounder the award is named after.

Lea Salonga won the 1991 Best Actress in a Musical for playing the titular character in “Miss Saigon.”

Investors to Broadway productions receive awards along with lead producers if productions win Best Play or Musical. Iloilo-born Jhett Tolentino, an investing producer with business partner Joan Raffe, has received Tonys for Best Revival of a Play for “A Raisin in the Sun” and Best Musical for “A Gentleman’s Guide to Love and Murder,” both 2014, and Best Play for “Vanya and Sonia and Masha and Spike,” 2013.