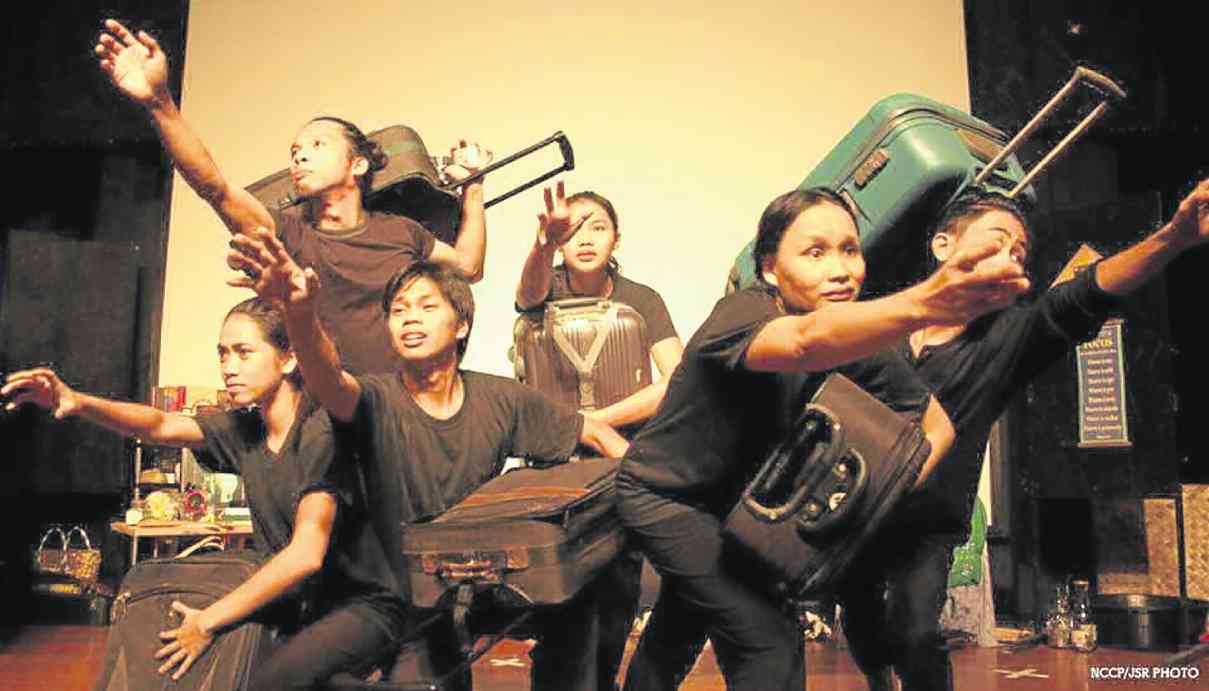 A SCENE from “Maleta, Kahon, Karatula,” one of three original plays staged so far by Teatro Ekyumenikal. Productions are based on research and exposure to communities of conflict, said director Rommel Linatoc. PHOTOS COURTESY OF NCCP

Teatro Ekyumenikal: Activist theater fired up by the Gospels

JOHN 10:10 has taken Teatro Ekyumenikal to a lot of places.

“Perhaps the only place we haven’t performed in is a moving bus,” quips director Rommel Linatoc, taking a break from Friday night practice in a chapel. “The verse should really take you everywhere, given the breadth and depth of it.”

“The thief comes only to steal and kill and destroy,” it reads. “I came that they may have life and have it abundantly.”

Abundant life, explains Linatoc, is the mission of the theater group. Thus, their themes revolve around justice, peace, human rights, “the integrity of Creation”—topics that have made Teatro Ekyumenikal a fixture in protest actions.

“We perform during the State of the Nation Address (Sona), in Mendiola massacre remembrances, on International Women’s Day,” says Darling Morales, one of the first members of the group, which was established in 2010.

But it would be a mistake to call their performances protest theater, Linatoc says. There’s more to Teatro Ekyumenikal’s performances than being “against the establishment.”

Teatro Ekyumenikal gives a modern-day interpretation to the Bible, he explains. “What is the Bible saying, and what is happening now? What is not being said, or not known to many?”

That makes them an “alternative educational ministry,” Morales says.

The affinity to the Bible comes from Teatro Ekyumenikal’s background. It is a cultural theater arts group established by the National Council of Churches in the Philippines (NCCP), an ecumenical network of alternative Christian communities in the country.

The group’s initial membership came from NCCP member-churches. Linatoc is a member of the United Church of Christ in the Philippines (UCCP), while Morales is a member of the Iglesia Filipina Independiente. Practices are held in a chapel at the UCCP national office on Edsa, beside the NCCP office.

The group later opened itself to other activist-members. New members are initiated through the Pasiduhay—Pagsasabay sa Sining Dulaan Para sa Kristong Buhay. Held every Holy Week, it introduces recruits to the organization and the basics of performance arts.

“The idea is to train a group of people who will in turn train their communities and churches, and beyond,” says Linatoc. “Hindi lahat ng tao nabibigyan ng pagkakataon. We are reaching out the kids so that they may have [creative] space.”

Materials produced by the group should be well-researched, so members visit problem communities and concerned offices looking for narratives and data, says Linatoc. “Part of the process is research, a discussion of the issues to deepen them, and Bible studies.”

They have mounted three original plays, all of which required intense research.

“Maleta, Kahon, Karatula” is based on interviews with migrant workers based in Europe, the Middle East and Southeast Asia.

For “Bopis,” a story about the privatization of the health sector, they went to the National Kidney and Transplant Institute, Lung Center of the Philippines, Philippine Children’s Medical Center and Philippine Orthopaedic Center.

“DamDamDam: Para Kanino Ang Kaunlaran,” first shown in 2013 and scheduled for a restaging in October, highlights the concerns of the Aeta, Dumagat, Igorot, Mangyan, Tausug and lumad communities, including mining and climate change.

As soon as they’ve gathered material, the members break out into smaller groups to create the plot and work on the staging, from script to blocking or choreography. They finally merge for consultation with Linatoc and other groups, then create a finale. They preview their shows to observers and critics, including people from the sectors involved.

It’s much like Paulo Freire’s “Pedagogy of the Oppressed,” Linatoc acknowledges. “But I think the Church has been doing it long before he coined it.”

Their materials are also provocative. They’ve produced a story based on controversial general Jovito Palparan. They’ve performed in front of government officials. When a Dutch missionary was gunned down in 2012 in Pampanga, they performed in the still blood-stained crime scene, says Morales.

“We discuss what the material is, then our cast improvises. These are mini-productions, about seven to nine minutes, never over 20. We just want people to ask, wonder, question… The group picks up this ethos: All spaces can be converted into a performance space.”

“We’ve performed a piece about human rights and migrants on a stairway in Batac,” says Morales. They’ve also performed along Manila Bay and in North Triangle in Quezon City.

Their productions combine dialogues, spoken word, dance and song. The pieces are titled with chunks of verses, like “Isaiah 65” or “Luke 4: 8-9,” if not religious songs. The members have no concept of the backstage—if you have multiple roles, you change onstage; if you are not on, you watch onstage.

It’s unlike other Christian groups since they come up with interpretations instead of reenactments of the Bible, but that is only to the group’s advantage, Linatoc thinks. “Other groups only surface during Christmas or Holy Week. We always have something for the people.”

International religious communities have taken notice of Teatro Ekyumenikal. They’ve performed at top-level meetings in Manila, Korea and Indonesia, for example. They might fly soon to Germany.

But, Linatoc adds: “Our performances always end with the message that there is hope. Hindi naman happy ending pero laging may pag-asa.”