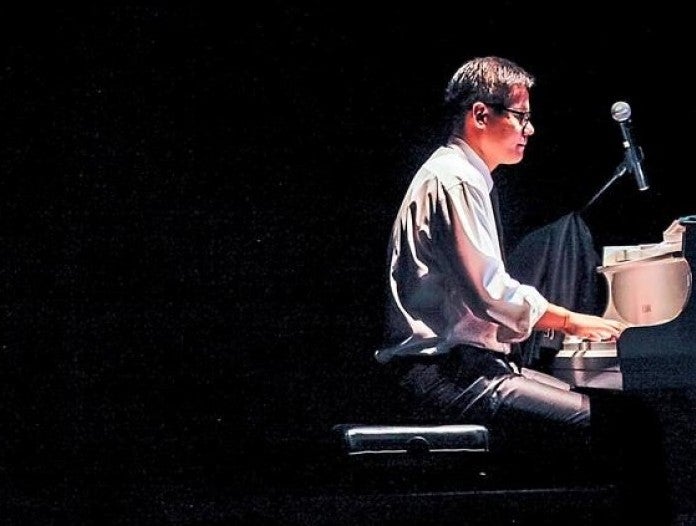 This pianist started learning jazz to impress the girls

Dreaming big is an understatement. Jazz musician and composer Tay Cher Siang wants to reach for the stars.

He has already performed in various music festivals – local and abroad – with his band WVC, arranged and composed the music for local musicals such as Yao Lee – The Legendary Rose (2012) and Xuan Zang, The Journey To The West Musical (2014) and scored the film The New Village (2012).

Clearly, Tay is in the thick of it all. But what he has planned for the future is something bigger.

The 38-year-old musician, who divides his career between Kuala Lumpur and Kobe, Japan, intends to produce a musical version of Japanese author Haruki Murakami’s 1985 novel The Hard Boiled Wonderland And The End Of The World, which is a story split between parallel narratives.

If this is not audacious enough, Tay is planning a full-length multi-media musical (Crossing The Sea) which tells the stories of our forefathers who came to Malaya. His involvement in local musical theatre, which began with Chinese-based productions, has pushed his compositional range.

“I first started to work with Han Production in 2011, we did The Legendary Rose, and then Journey To The West at Istana Budaya. The experience was highly rewarding. I got to compose, arrange music that I wouldn’t be able to do otherwise, with my band,” says Tay in an interview in Kuala Lumpur. “From these collaborations I also got to expand and write music for a documentary that is still in the making, which was filmed entirely in India.”

Kuala Lumpur-based musical companies Pan Productions and Dama Orchestra, says Tay, are two companies out there that he would love to work with, while a Hands Percussion collaboration would be a dream ticket.

Surely, a man who breathes and lives music must have been immersed in the art form from a tender age. But it was not love at first sight for the Malacca-born, who had “issues” with his piano lessons.

“The first day at piano lesson was okay, but it got worse and worse. I didn’t like practicing while others were playing outside and I didn’t really appreciate classical music and the nerve-wrecking (piano) examinations,” he adds.

This changed when he was introduced to jazz music. Well, part of it had to do with impressing girls.

“Music started to seep into my consciousness when I was around 13 or 14. Later on, I practiced piano to try and impress girls in my school.

“I consciously listened to jazz when I was about 16 because I fell in love with bossa nova. I encountered it one day while walking by an old record store in Malacca that was playing Antonio Carlos Jobim’s Corcovado sung by Astrud Gilberto.

“I was hooked on this music. I searched high and low for any jazz books,” recounts Tay, who is a father of two (a boy Tomo and a girl Mayu).

He lists jazz musicians like Bill Evans, Brad Mehldau, Jan Garbarek, Miles Davis and Herbie Hancock as some of his favourites.

He took the academic route and went on to earn his Masters in Jazz Pedagogy from West Virginia University’s (WVU) School Of Music in the United States. He studied under the veteran music academic Professor James Miltenberger (aka “Doc” Miltenberger).

As a film fan, Tay relates his work process, which can be rather serious and amusing.

“When I compose for films, or musicals, I usually think of the visual aspects of the work. While studying in the States, I absorbed how film composers relate music with visuals. There is certain stock music that always works well with certain visual cues. For instance, with an army marching (scene), you will always hear heavy drums, or when an evil spirit appears on screen, there is always this eerily dissonant string music,” he explains.

“Also I learned a lot from classical composers like Wagner, Mahler, Rachmaninov. Their music is very visual and highly motivic.

“Personally, it is important that I come up with musical motifs that I can develop into a piece of music. It can be while I am driving, so I hum into my phone, or while I’m taking a shower, so I jump onto my piano bench and bang away, still wet! I can make music while trying to sleep … this usuall will ruin my sleep for that night. I don’t really need a particular scenario or place, or time to be working, I work everywhere.”

And it was also during his stay in the US that Tay formed WVC with two of his American classmates in 2006. After graduating from WVU, the trio performed in Malaysia and the Asian region and even released an album called WVC Trio. But the trio’s long distance relationship didn’t work out.

In the end, Tay enlisted homegrown musicians for the WVC project.

“But of course, it lost its original meaning of ‘West Virginia Connection’, but fret not. WVC can also stand for ‘We’re Very Cun’ or ‘World Vegetarian Congress’ as our saxophonist Julian Chan is a vegetarian,” says Tay candidly.

Apart from Tay, WVC’s line-up includes Chan, bassist AJ and drummer KJ Wong. The quartet has toured extensively, including a one-month long tour of China, Macau and Bangkok in 2014. In March, WVC released its fifth album entitled Do Not Go Gently, distributed by Starmount Records here.

Tay says it took the band 18 months to complete its latest album.

“As a whole, Do Not Go Gently is a tapestry of our lives, told through music. This is our most ambitious project to date. We have a string ensemble, and also a collage of sounds and news snippets infused in the music.

“I wrote the title track, Do Not Go Gently and also Rage Against The Dying Of The Light, after reading a film review of Interstellar. This poem by Welsh poet Dylan Thomas, Do Not Go Gentle Into That Good Night, struck me at the moment that my father was getting weak and frail, and he is still fighting his ailment day by day. This album is a gentle reminder to all of us to ‘do not go gently’,” explains Tay.

In his music-making capacity, Tay sounds optimistic when asked about the future of the Malaysian music industry.

“I see many hardworking and wildly talented people shed blood, sweat and tears in developing the scene. It is true we might not get as much help from the government, but I never see anyone in the art scene shying away from doing real work simply because there is no funding. Ours is a grassroots movement, and that is very encouraging,” concludes Tay, who is also set to appear at the upcoming Yayasan Sime Darby 2016 festival at KLPac in August.