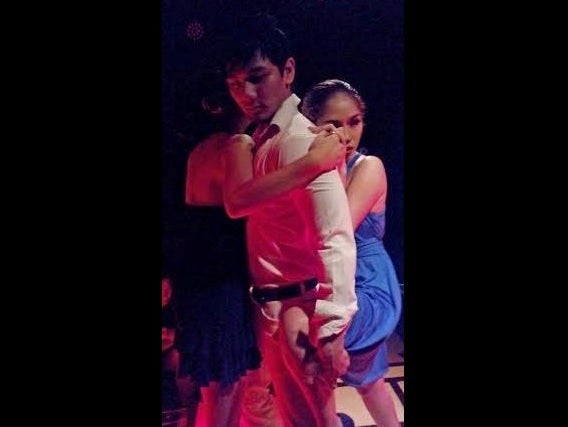 Scene from Artist Playground’s “Happiness is a Pearl,” written by Rody Vera and directed by Paul Jake Paule. The show runs at the 30-seater The Little Room Upstairs at Landsdale Tower, Mother Ignacia Ave., QC, until July 3. PHOTO BY AXL GUINTO

Love, lust and happiness in a ‘pearl’

The aptly named 30-seater The Little Room Upstairs at Landsdale Tower in Mother Ignacia Ave., Quezon City, pushes the boundaries of intimate, experimental theater by removing the veil of mystery that surrounds the need for companionship, sex, and ultimately love in Artist Playground’s current production, “Happiness is a Pearl.”

Written by Rody Vera and directed by Paul Jake Paule, the play is a short but intense tale of the proverbial love triangle of two women vying for the attention of a man. The titular pearl is not merely metaphorical, but an actual jewel threaded in the man’s genitalia that apparently heightens the orgasmic pleasure he can give his partner.

However, the happiness that the pearl gives its characters has a flip side in the pain that it also inflicts on the main characters, making the audience see the crucial line that divides love and lust.

Tomas Miranda’s Kenji, the Japanese male escort, is hunky and charismatic enough to make understandable the leagues of women, many of them Filipinas, who literally run after him. Often, he hews too close to the inscrutable, stoic nature of his character; until the last scenes, it’s hard to read any emotion into his face or voice at all.

Miranda lets his body do all the talking for him. His stillness, and his passion and gentleness with one woman, and his mechanical rutting with another, alternately support and replace the lines of dialogue spoken by his character.

The claustrophobic set, enlivened only by the soft glowing hues of the lamp reflecting on the paper-like windows and the white platform stage literally only a few steps from the audience, also works wonders. Sometimes, you feel like you’re in a prison; other times it makes you feel like you’re peering into the very private affairs of your next-door neighbor—probably because their emotions are both a home and a prison for both Kenji and his two Filipina lovers, the wife-turned-prostitute Mari (Ruth Alferez) and Maria (Ira Ruzz), the Pinay “Japayuki” whose quest for security turns into a campaign for love.

It’s not a coincidence, either, that the women have similar-sounding names; they are two sides of the same coin. But beyond the archetypes, the actresses do play their parts like they are your next-door neighbors, and not necessarily the ones you want to be with—not in the beginning, anyway.

Their blistering catfights, unapologetic lewdness and occasional screechy speeches remind you of the out-of-school girls who sing karaoke in the middle of your street, or the harshly face-painted ladies who prowl for customers outside nightclub doors.

The performances do not need refinement, because the emotions and passions that drive these women are almost visceral. Miranda’s leashed ferocity and silent bewilderment act as the unintentional fulcrum that balance the women’s explosions. And with women like these who have so little in life, they fight as if they have nothing to lose.

Mari, neglected by her Japanese husband, has her sensuality stoked by the Japanese male escort, while Maria hooks into him initially as her meal ticket to get her Philippine-based children out of poverty.

The beauty of Vera’s script is that, unlike other material which would have accentuated the unending cycle of poverty and despair, it actually uses those elements to transform the characters. The journey changes them, leaving them different than when they first started. And like their initial jousts, the final emotions in their faces are all too raw, and all too realistic.

There is no dignity to save Mari’s spirit when Kenji literally gives her what she wants in those few squirm-worthy seconds near the end. The flood of tears, the stooped shoulders portray the extent of the depravity she has succumbed to. In contrast, Maria’s face shines as she rediscovers the meaning of love, echoing both the rashness of a teenager who has thrown caution to the wind, and the joyousness of a beggar who discovers in that unmarked field a true pearl of great price.

Kenji’s unmoving form at the end, however, leaves him a mystery. He is both winner and loser, savior and saved, both fulcrum and castaway. Maybe it would have broken character, but a bit of emotional revelation would have been welcome from him. The man who paid the ultimate price for both love and lust should have had that one final defining moment—the master of intimacy opening his most intimate parts beyond his defining physicality.