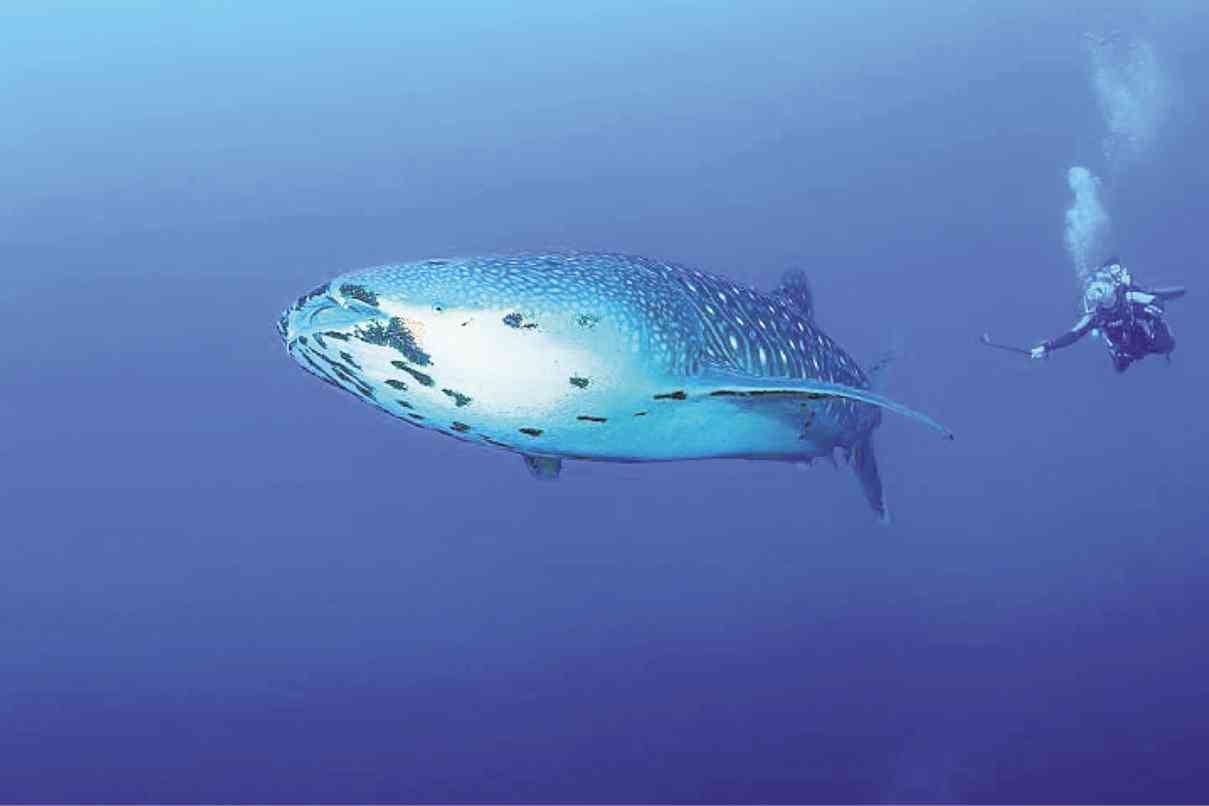 Our big surprise in Tubbataha—diving with Destiny

It was a quintessential Tubbataha dive—volatile currents, tons of fish, and a big surprise.

We were at Seafan Alley on Tubbataha’s North Atoll, making our way back to the shallows after some 40 minutes of spotting slender whitetip and chunky gray reef sharks, giant trevally, tuna, and turtles.

The graceful sharks showed up when the currents picked up and mingled with shimmering walls of jacks, or a huge school of silvertips concealing a couple of big, round marble rays trying to sneak across the edge of the reef.

With my designated buddy, the Philippine Commission on Sports Scuba Diving’s (PCSSD) energetic young executive director Karen Chan—also an instructor, by the way, so I felt really safe!—I had wandered a few meters ahead of the group, so we bided our time at about 15 meters, until we all met up for our safety stop in a few minutes.

We were looking upward toward more schools of fish, with a couple of big, fat Napoleon wrasses cruising above us at 10 meters, when we glanced behind to see the whipping of a big tail in the murky distance.

The visibility in Tubbataha for this transition voyage of M/V Discovery Palawan last June was unusually limited. Well, it was the end of Tubbataha season in an El Niño year, and this was the final journey for 2016 for this large, comfortable dive boat before it starts its northern Palawan trips, to Coron and Apo Reef, in a couple of months.

As finale, the boat was bringing 30 divers and a large crew back, from over 97,000 hectares of Tubbataha’s Unesco World Heritage Site reefs and water in the middle of the Sulu Sea, to the Batangas port.

You see, this crown jewel of the Philippines’ marine protected areas and the only purely marine World Heritage Site in Southeast Asia is famous for insane visibility, so much so that you don’t realize you’re finning away your no-decompression dive time at great depths.

Located in the municipality of Cagayancillo, Palawan, Tubbataha Reefs Natural Park can be reached only after a 10- to 15-hour boat ride from Puerto Princesa, and it’s only accessible

This remoteness has contributed greatly to its survival. Aside from being inscribed on the Unesco World Heritage List in 1993, Tubbataha was also declared a protected area under Republic Act No. 10067 in 2009, and an Asean Heritage Park in 2014.

Tubbataha is basically two uninhabited atolls and a reef in what seems to be the middle of nowhere—but it’s also home to 84 threatened and 97 near-threatened marine species; is an important highway for migratory species, including seabirds; contains 90 percent of the coral species in the Philippines, earning it pride of place in the Coral Triangle; and is a treasure trove of fish and coral larvae in the Sulu Sea.

In other words, it’s a national—and global—natural and economic treasure.

When we saw that tail in the distance, neither Karen nor I wanted to call it. Eventually, we met up with the rest of the group, and were hanging out in the shallows.

Tubbataha is wild and wonderful, and wont to throw divers—who pay top dollar to come here from all over the world, drawn by its famed waters—a gift or two.

In our case, a couple of meters below my fins, I saw ours—a 7-meter young whale shark winding its way leisurely up the reef’s edge, approaching us, but trying very hard to be unobtrusive.

But how can you, the biggest fish in the world—Rhincodon typus can grow up to 12 or 13 meters, the size of a bus—go unnoticed, with your unmistakable spots, slow, graceful movement, and absolutely cute face?

(Check out Destiny, the adorable whale shark in the Disney animated film “Finding Dory,” and you’ll get an idea—except that this one might be hard to cuddle.)

Divers who spot any of the ocean’s most charismatic species on a dive—whale sharks, manta rays, hammerhead sharks, and in Tubbataha for the last few years, sightings of that apex predator, the tiger shark—get drunk with excitement, as we were after that dive, signaling the people on the boat with the signal for “whale shark,” a “W” across the forehead.

Because we dove in four separate groups, only half of us saw the big baby, the highlight of four days of diving.

Wisely, our divemasters—particularly Dominic “Yohan” Manuel, who was in charge of our group—opted to take us to the same site for the next dive. Whale sharks like to hang around in the shallows to get themselves cleaned by smaller fish, who feed on the parasites on their bodies, so maybe the grooming wasn’t over.

True enough, it was a party down there, and within five minutes of the dive, we again caught the tail end of the animal.

I thought that was it, until Yohan signaled with a few tentative bangs on his tank (that’s how divers call each other). And then, there was Destiny, meandering slowly above us at about 15 meters, in no apparent hurry, taking her time while the tiny humans went bananas. We all saw her this time.

Naturally, happy hour was really happy on that excellent end to four days of Tubbataha diving. It helped that the boat had a well-stocked bar, along with a host of other pluses to make a seven-night trip like this one truly comfortable.

Built in 1972 in Groningen, Holland, the 49.20-meter M/V Discovery Palawan started out as a schooner, was reincarnated as a navigation training ship, and eventually moved to the Philippines as an adventure cruise ship.

She got her new name in 2013 after being acquired by the Discovery Group, and after a $1.5-million renovation.

The upgrade works to the advantage of the maximum 32 divers the boat can carry. It has 20 air-conditioned rooms, a salon (where the photographers had camped out with their laptops and cameras), a sundeck, a bar deck, and an al fresco dining deck. It was obviously also designed with divers’ convenience in mind.

Near the dining deck, there’s plenty of space to fix your stuff; there are rows of labeled crates to hold wet gear, places to hang wet suits.

Most importantly, the crew knows what to do. You show them how you want your gear set up once, and it appears in one of three orange 75-horsepower chase boats the same way for each of your four daily dives. You just have to get in with your mask, dive computer, and as Asia Divers co-owner Tommy Soderstrom added, “a smile.”

You’d smile, too, if your large crew included a chef who remembers you don’t eat meat, a maître d’ who  brings second servings of dessert to your table, even a housekeeping assistant who finds you an extra ponytail holder when you’ve lost yours (thanks, Aiko!).

Tommy and Asia Divers’ marketing manager Allison Manis had brought along a group of 19 divers for this trip, many of them Philippine-based expats and regular clients of the Puerto Galera-based dive shop (www.asiadivers.com) and its resort, El Galleon.

Allison herself, also a dive instructor, was on her eighth trip to Tubbataha, having come to Manila from Toronto over 20 years ago to work at the Canadian Embassy; she’s lived in Galera since.

“I tell our expat friends, you can’t be in the Philippines and not dive Tubbataha—the biodiversity is different, spectacular. And the boat is really excellent,” she said.

Beijing-based Microsoft executive Frank Yeung was unequivocal: “It’s the best boat I’ve ever been on, really worth the money. And it’s the first time I’ve ever seen a whale shark!”

Beth shared with us some pictures, including one of Destiny the whale shark. “Diving in Tubbataha is wonderful,” said Beth, who, with husband Steve, was also on a return visit. “The reefs are healthy, topography varied and marine life prolific.”

Karen Chan, whose office is under the Department of Tourism, quantified the value of Tubbataha to the country: “There were almost 2,500 visitors to Tubbataha this last 2016 season. That’s about P7,500,000 in park fees, but that’s being used for park operations.

“As of April 2016, total international tourist arrivals were at 2,073,000, so it’s actually just a small portion. But Tubbataha’s contribution to the Philippines goes way beyond the financial. Having a tourist attraction that has a very good reputation raises the desire of prospective tourists to come. It makes them feel that there is value for the money.”

That’s no mean feat, considering that most divers who get to Tubbataha are seasoned travelers who have dived everywhere.

“More sophisticated and well-traveled divers always compare it with other celebrated dive destinations. Generally, though, visitors want it to be conserved because they recognize that it is a precious resource. Its ecological value cannot be ignored. Well, the experience can be stressful for some because there is no cellular signal,” Karen said with a laugh, “but they are generally in awe, and appreciative of this natural wonder.”

Karen was also concerned about the Tubbataha Park Rangers who diligently guard the reefs, and are hands down the main reason—with a maverick Protected Area Superintendent, Angelique Songco—that Tubbataha remains rich and beautiful to this day.

The rangers, a composite group of Philippine Marines, Coast Guard, Navy, local government, and Tubbataha Management Office men who live in an isolated station on Tubbataha’s North Atoll, were there when the US Navy minesweeper, the USS Guardian, ran aground in January 2013.

The US Navy paid $2 million in damages in February 2015 to the Department of the Environment and Natural Resources, but the Tubbataha Management Office is still waiting for the money to be released. (Hi, incoming DENR Secretary Gina Lopez!)

Karen is also hoping that plans for an expanded ranger station—it’s now basically a small house on stilts on a sandbar—would see fruition soon. “It will by far improve the habitation conditions of the Tubbataha Marine Park Rangers, who sacrifice a great deal when they get deployed for duty for a prolonged period, in a faraway place, with no easy means of communication,” she said.

To their credit, Discovery Palawan always brings guests to visit the station and buy some of the fund-raising items the rangers sell, including T-shirts and plushies that are often sold out—retail therapy in the middle of the Sulu Sea.

As Destiny swam above us after that unforgettable last dive, I spotted divemaster Anne Astorga opening her arms in a celebratory embrace, demonstrating what we all probably felt at that moment—that we loved Destiny and all beautiful marine creatures like her, and that we hoped she would always travel safe and live for a long, long time.

Thanks to the rangers, the dive tourists, the responsible dive operators and everyone who cares, if she hangs around the Philippine underwater paradise that is Tubbataha long enough, her chances are pretty good.

The Discovery Fleet sails to Tubbataha every Philippine summer; it’s not too early to book for the 2017 season, which starts March 2017. It also sails to Apo Reef, Coron, and El Nido, for divers as well as non-divers, beginning in October. Check out www.discoveryfleet.com or visit them on Facebook.