Chasing structures from the past | Lifestyle.INQ ❮ ❯ 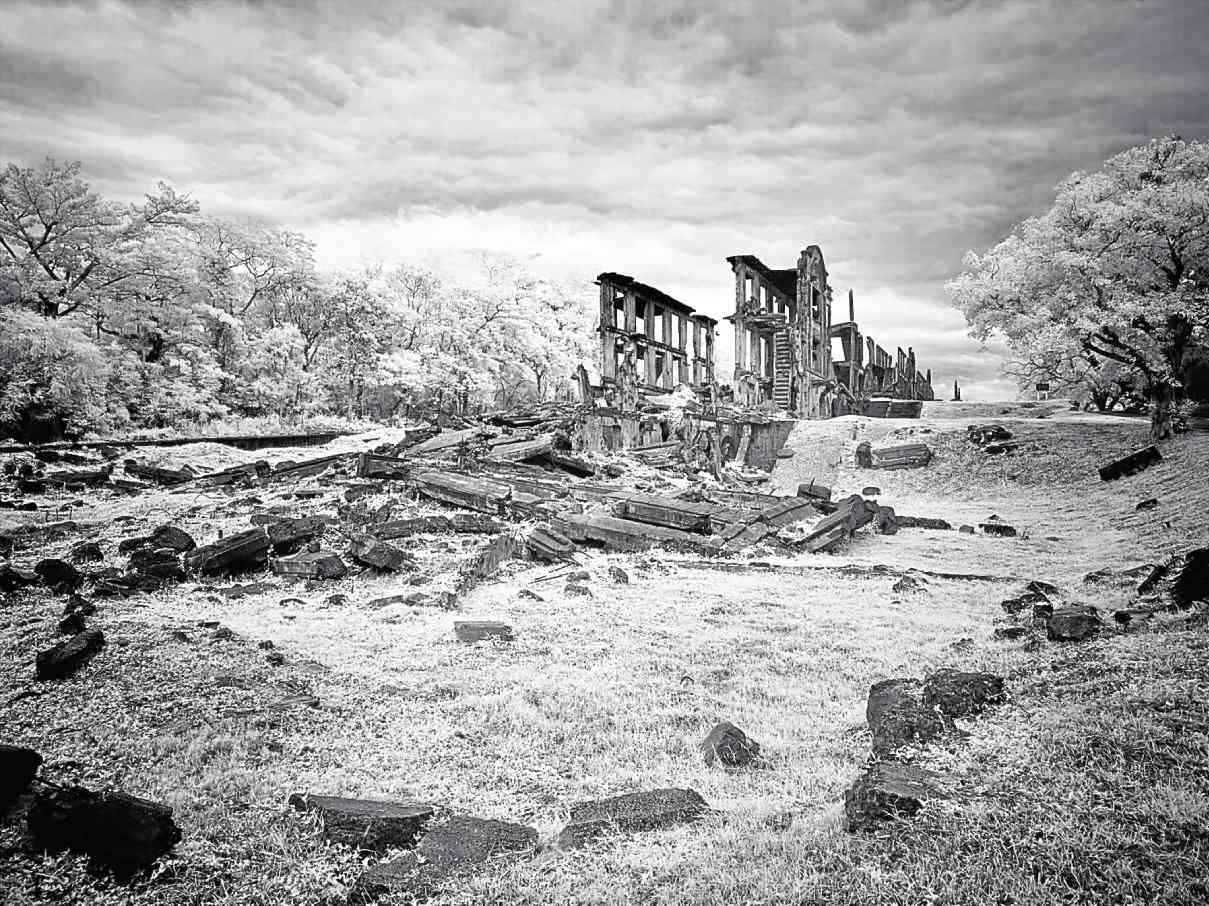 MILE-LONG Barracks was taken at a wide angle, with the landscape larger, and the remains appearing to shrink toward the vanishing point.

Chasing structures from the past

Visitors are mesmerized by the blow-ups of misty waterfalls and awe-inspiring landscapes in the Philippines. Benigno “Bengy” Toda III holds the distinction of being the first photographer to have a permanent collection at National Art Museum.

Ask how Toda achieves such powerful images, he replies in Tagalog: “Look in your backyard. The beauty is just there.” He adds that he doesn’t glamorize squalor or garbage.

Toda—son of former Philippine Airlines chair Benigno Toda Jr.—has traveled the world and photographed breathtaking panoramas and dramatic vignettes. Yet he ends up being lured by the natural splendor of the Philippines.

On the other hand, his latest exhibit, “Chasing Bridges” at Provenance Gallery, shows the surreal beauty of heritage bridges in the southern Tagalog region and the skeletons of the military barracks in Corregidor.

The photographs of Spanish bridges are of utmost significance, says Toda. They are reminders of the handwork of the Filipinos and all but forgotten legacy of the Spaniards.

In a country separated by water, these bridges spanned deep gorges and rivers. The arches supported the overpass. The Spaniards constructed the bridges to link communities for Christian evangelization and to facilitate the trade of goods throughout the country.

Villalon quotes the book as saying that the bridges were a testament to the engineering genius and determination of the Filipino and Spanish builders.

Toda recalls that an artist/mountaineer in his company, Studio 58 Lab 10, had tipped him of the eerie Spanish bridges in Quezon. They Googled them and did a pre-production game plan for the shoot.

With a team of two assistants and a driver, plus several cameras, they hopped on a pick-up truck.

“One day, at 3 a.m., we went out and looked for them,” recounts Toda. “I’d go down into water, wade through the dirty streams, see the feces floating. Ugh! You just have to do it.”

He spends time looking for the right angles that capture the grandeur or desolation of old structures, and their character, ravaged by time and nature. “In the end, it’s very rewarding. These are the only high-end pictures of the bridges and printed 45 x 65,” he notes.

One of the most important bridges is Puente Malagonlong in Tayabas, Quezon. The 136-meter length makes it the longest bridge built by Filipino forced labor in 1840, and inaugurated in 1850. It has been declared a National Cultural Treasure by National Historical Commission of the Philippines. Today, the small balconies are used for pedestrians.

Puente de Alitao, built in wood by the Spanish governor general in 1798 and then made into stone by the friars in early 19th century, is still used today. Toda’s team extensively retouched the photo by removing the ghastly telephone wires to show the bridge’s bucolic charm.

Toda recalls the search for Puente del Capricho in Majayjay, Laguna: “We had to look down the ravine and see if the arch was there. Most of the time, we jumped because it was steep.”

His image of Puente del Capricho captures the arch protruding out of the layers of  dense ferns, creepers emerging from its crevices and trees.

The photographer stood at the foot of the ravine, capturing the steepness and loneliness of being in an abyss.

Puente del Capricho also reveals how the combined control of the Spanish government and the friars resulted in the muddle of liability. It’s been said that the friars smacked the buttocks of the Filipino workers. Hence, the laborers left the project unfinished with only one arch in 1852.

An official report to the Spanish governor general cited that the bridge ignored scientific principles. It was nicknamed Puente del Capricho or the Bridge of Whims because the construction was led by a friar who was ignorant of engineering.

Toda also went to Corregidor to photograph vestiges of the Mile-Long Barracks and Middle Barracks. Their skeletal framework created a repetition of boxes that spanned the island, creating an impression of a bridge.

Toda chose infrared or IR photography, where the range of light is beyond what the normal eye can distinguish. It was popular in the war to show marked differences between undergrowth and buildings, better distinguishing hidden enemy sites.

IR photography is considered an art form, whose allure lies in its dreamy ambience and vaporous and sometimes surreal appearance. For Toda, IR photography allows him to play with contrasts in texture.

—the contrast of black rocks against white vegetation, cottony clouds etched against the black skies—puts the architecture in their present context.

“I like the drama it brings,” says Toda on using IR photography for the bridges and barracks. “It shows that once there was a life. Their destruction is heartbreaking.”

The exhibit runs until today, July 5, at Provenance Gallery, Shangri-La at the Fort, Taguig.