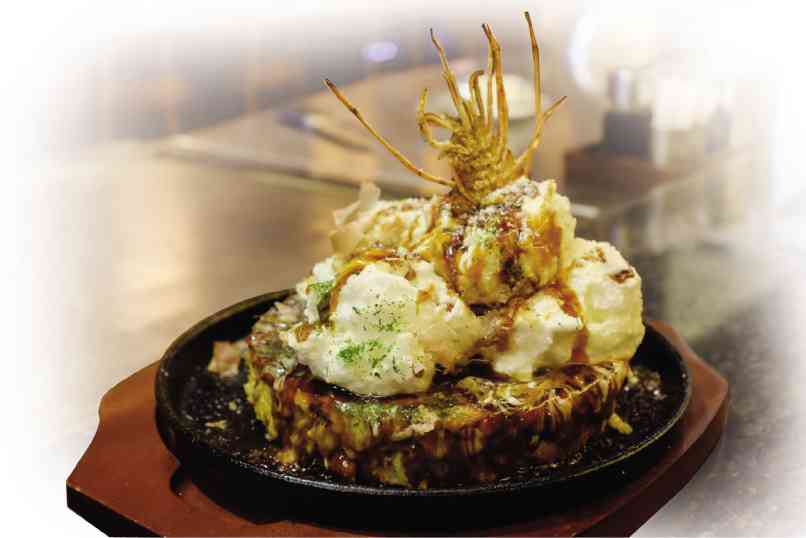 ‘SNOW white princess,’ or Shirayukihime, got its name from the meringue topping but this savory dish contains prawn, bacon, pork, tomato, avocado and cheese.

In the past few years, traveling to Japan has become affordable, with more flights on low-cost carriers and the rise in popularity of Airbnb.

As a result, Filipino travelers have gotten to sample menu items beyond sushi, donburi and gyoza. They are aware that restaurants specializing in one dish—like soba, ramen or yakitori—are more often the rule than the exception.

When Chibo Okonomiyaki opened a few weeks ago at S Maison, many of its customers knew what to expect. S Maison is the newly opened mall at Conrad Manila beside the SM Mall of Asia.

Okonomiyaki is a savory Japanese pancake filled with a variety of ingredients.

“Okonomi” means “what you like” or “what you want,” while “yaki” means “grilled.”

The main ingredient is shredded cabbage thickened with a batter into which chopped seafood, pork or “what you like” is added.

In the restaurant, fillings can range from the traditional (pork, shrimp) to the modern (leeks and squid or noodles and cheese).

“When we opened on June 15, most of our customers were already familiar with okonomiyaki,” operations manager David Guevarra told Inquirer Lifestyle.

For those who weren’t, the staff recommended the classic Butatama with its base of cabbage and pork; the Doutonbori with beef, shrimp, cheese and pork; or the protein-dense Chibo with prawns, scallops, beef and pork.

The Shirayukihime (“snow white princess”) almost looks like dessert with its meringue topping, but this savory dish packs a hefty punch with prawn, bacon, pork, tomato, avocado and cheese.

One variant you won’t find in Japan was whipped up exclusively for the cheese-loving Filipino market.

The Cheese Yaki falls under “new style” okonomiyaki and has a double whammy of cheese filling and topping, teppan noodles, bean sprouts and pork.

A personal favorite, among those we sampled, is the Negi Yaki layered with leeks and squid, and grill-pressed with pork and egg.

“We import from Japan nagaimo, a starchy yam that gives our okonomiyaki that distinct texture and mouth feel,” Guevara said.

This attention to detail is needed since cooking okonomiyaki can be tricky—knowing when to flip and when to stop cooking is a learned skill. Cooking is done either in the restaurant’s teppan room or in the kitchen before the okonomiyaki is placed on the grills at each table to ensure food is kept warm.

Guevara and several staff trained in Osaka with the Japanese chefs for almost two months.

The restaurant in the retail area of Conrad Manila was founded in 1973 at Sennichimae, a district in Osaka famous for gourmet eateries.

Now, Chibo Okonomiyaki has a six-story building in Osaka’s famous Shinsaibashi Dotonbori where there is a queue of hungry diners until closing time.

The restaurant, one of the first to open at S Maison, also offers teppanyaki (grilled items) so guests can choose among grilled US beef, Japanese wagyu or fresh seafood to add to their okonomiyaki.