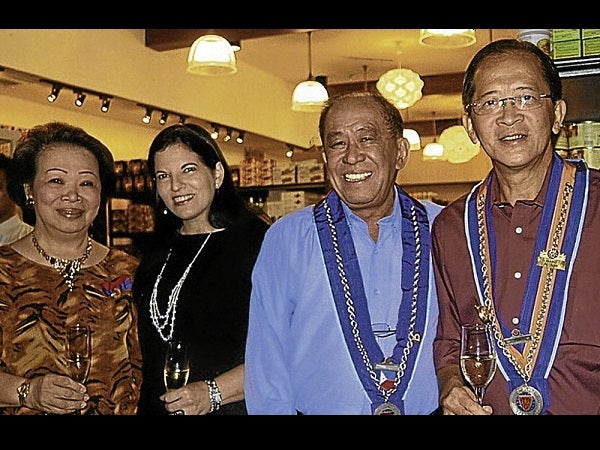 ‘Lhuillier Brut’ and more at a Chaine des Rotisseurs dinner 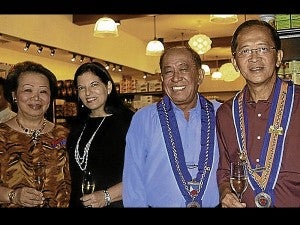 The latest fellowship of La Chaine des Rotisseurs in Cebu was held at the Gustavian restaurant in Banilad, on the road that leads to Maria Luisa Estate Park.

There was a large turn-out of guests, more than 70, some of whom had signed up weeks in advance.

Michel and Amparito Lhuillier were in their element, welcoming one and all at the entrance, offering champagne flutes bubbling with “Lhuillier Brut,” specially bottled for them in France.

They had double roles that evening, first as owners of the Gustavian, and then as premiere members of La Chaine. Michel heads the organization in the Philippines, while Amparito is the “Baili” of the Cebu chapter.

Among the first to arrive were Rep. Eddie Gullas and his wife Ming-Ming. She was wearing a frothy pink number she said she could not resist in a shop at St. Tropez when she visited the French Riviera last summer.

The Marco Polo Plaza Hotel’s general manager Hans Hauri was present, with his wife Bo, food and beverage director Stefan Wieprich, and executive chef Luke Gagnon. The next Chaine event in Cebu will be the 18th anniversary gala with a Christmas theme, at the Marco Polo, on Dec. 6.

“That’s my birthday,” said Michel’s sister Angie L. Mathieu. She and Carmen Campbell were admiring the masses of blue/violet “million flower” clusters that adorned the tables. The more bluish hydrangeas are, the more iron in the soil, they were told. Cecilia Rodriguez said that in Spain they are called “hortensias.”

Marguerite Lhuillier was looking great after spending a few months in Paris. Wonderful, she was telling cousin Margie Richards Taylor who is based in London, and dear friend Mariquita Yeung. Introduced to Qatar Airways Cebu manager Mohammed El Emam, Margie said she had a great flight, and exclaimed about the luxurious premiere terminal in Doha.

There were two buffet tables. One was for the appetizers, of which the marinated smoked salmon rated drew raves (it was not too salty), as did the liver terrines and an array of French cheeses. 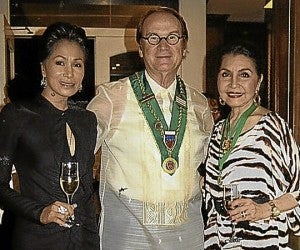 At the warm food buffet the main attraction was the carving station dispensing the most tender, juiciest roast prime tenderloin ever with a choice of sauces. Perfect with it were the steamed vegetables flavored by olive oil and a dash of vinegar.

Movenpick’s director for business development Helmut Gaisberger came with wife Lorena, and collected congratulations for the success of Oktoberfest at the Movenpick in Mactan on the last Saturday of October. There was beer, as well as sausages galore, plus lively music from the Bavarian Sound Express band flown in from Germany for the event.

Inevitably, before going home, many directed their footsteps, baskets in hand, to the adjacent mini mart to shop for French gourmet delights like mustard from Dijon, varied versions of foie gras, bottled chestnuts, asparagus spears and sausages. Most amused was Michel Lhuillier himself, standing close to the cash register, flashing a smile as he said “Merci, merci.”