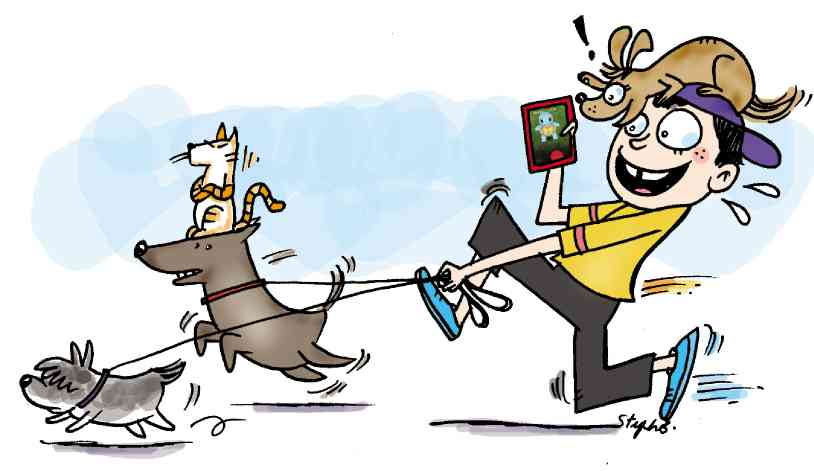 The mobile game Pokemon Go has not just unleashed virtual Pokemons in the world; it’s also opened a floodgate of memestorms on the Internet.

Barely a week into its release, there’s been a Pokemon Go madness—from the man whose house has been inadvertently turned into a gym, and a hangout spot among players by default, to police stations refusing entry to would-be collectors, to rescue dogs from animal shelters being given free walks by “volunteers” in order to hatch eggs.

Yes, the Pokemon Go fever has gripped us by the Pokeballs, and it shows no sign of dying down soon.

In the Philippines, we’re still waiting for legit activation. While you can get the app unofficially, the full fury of Pokemon Go has not made itself felt here. We can only imagine and (eagerly) anticipate the memes this will spawn. Here are some inevitable ones we might see:

Whipping out your smartphone in the busy streets of Manila is like sending a homing beacon to every snatcher within a five-kilometer radius. Make sure to look over your shoulder because, while you’re busy trying to land Pikachu, someone’s trying to pick at your pocket.

In Pokemon Go, one of the items that you can use is incense. This magical potion is the absolute answer to lazy trainers as it lures Pokemon near your area for a good 30 minutes. But what if criminal minds (ala Team Rocket) use this to trap you in a specific area just because your device shows a saturation of catchable Pokemon conveniently at one location? Burglars ought to get creative with this widespread trend too, right?

If Ace Hardware does not condone violence and suntukan, how about Pokehan?

Water-based Pokemons are said to be found near bodies of water. Pokemon Go’s release coincides with typhoon season, so prepare your boots and leptospirosis meds because it’s time to go hunting in the baha.

The game relies heavily on geolocations and the Pokemon sightings is unpredictable and can get a bit too random. Players are flocking to police stations or private homes just to get new entries on their Pokedex. But imagine if Pokemons can be found in areas that resemble their fictional habitats?

In a witty Facebook post by Fati Pressman, she listed where to find rare Pokemons in the Philippines. The idea that Ghost Pokemons like Gastly, Haunter and Gengar are haunting the Manila North Cemetary and Libingan ng Bayani at night, putting a real horror in a role playing game.

Tauros is said to be in Far Eastern University in Morayta Manila. Who knew that FEU’s school mascot has been a Pokemon in hiding all this time?

Buff fighting Pokemons are found in real-life gyms. Machop and Machoke are in Fitness First branches while Machamp is in Gold Gym. There’s a brand new reason to renew your gym membership!

You can cruise around the West Philippine Sea and reel in some Tentacool and Tentacruel too. The Hauge will totally back you up if China claims these Pokemons to be theirs too (yes, Pokemon Go shall be bound by international laws).

Legendary Pokemons make it to the list as well. Zapdos is said to be in the Meralco Main Office, Moltres can be found in Mayon Volcano and Articuno is just a Baguio trip away.

Although Fati Pressman’s list is 100 percent imagined, we can’t help but wish these Pokemons could be in more strategic and secure places.

Feeling #stressed because of traffic? Now it’s time to feel #blessed. Why waste your time waiting inside your Uber or Grab Car along Edsa when you can go out and catch Pokemon instead?

Hatching eggs happens only if you walk and not drive, but what about the humble padyak? Sidecar cyclists, this is your chance to make money off Pokemon Go by offering rides around the block to hatch eggs.

Bored with Grindr, Scruff, and Growlr? Get to meet new love interests at the gym (gym forever talaga). Pokemon, gora!