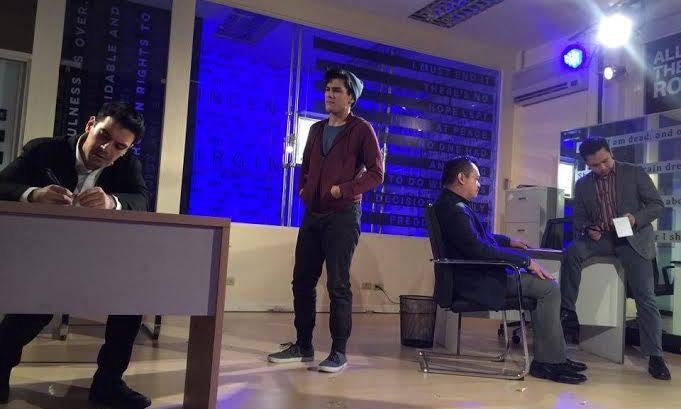 ‘Suicide, Inc.’ is essential theater in these trying times

There’s good theater, and then there’s important theater. Chalk it up to the arc of this moral universe, if you so please, that most times, those two traits aren’t mutually exclusive.

Twin Bill Theater’s currently running production of Andrew Hinderaker’s “Suicide, Incorporated” is one such walking, talking example. Just what is it exactly, this play revolving around a fictional company specializing in (surprise, surprise) suicide notes?

One can easily figure out Hinderaker’s plot points blindfolded—how the story would pan out, how each character would react, what the first big “twist” at the start is. The dialogue can get overly melodramatic, yet it also has its distinct brand of macabre humor.

That doesn’t sound like the perfect recipe for a show worth flocking to (and the venue—the Performing Arts and Recreation Center in San Juan City—isn’t exactly the easiest to get to). Its basic conceit aside, “Suicide, Inc.” could be just another soapy tearjerker grounded on the notions of redemption and forgiveness.

All it takes is a little perspective: You scan the news, engage in daily conversation and try to make sense of the change that is literally killing this country’s soul little by little. A play that deals with mental health couldn’t have come at a better point in history, when time demands that we look at issues like suicide and drug addiction from a more compassionate point of view.

Throughout the play, multiple characters try to take their lives (not all successful, depending on how you interpret the ending). If you really think about it, it wouldn’t be that easy treating a person who’s about to kill himself as a “client,” going through his sentence structure, metaphors and literary references just to compose that one perfect note.

It’s the singular idea implicit in Steven Conde’s tactful direction. His characters aren’t just one-dimensional figures desperate to wipe themselves off the planet. The suicide note is merely the tip of the iceberg, be it for the “clients” or for those working for the company.

We see all that in the protagonist Jason, played by Hans Eckstein with touching vulnerability; in his flamboyant officemate Perry (Chino Veguillas, who also does two other characters and easily wins the audience over with this delectable chameleonic turn); and even in Jason’s brother Tommy (Bibo Reyes, his silences beautifully conveying everything that’s left unsaid).

Even the demanding, seemingly cold-blooded boss of the company (cheekily named Legacy Letters) isn’t written off as just another villain. Jeremy Domingo plays the part and has the tendency to ham it up, but his portrayal makes it clear the man’s more than just his words and outbursts.

Likewise, this production, which unfolds on an aptly sterile set by Ed Lacson Jr., is more than just the sum of its parts.

It has Mako Alonso’s breakthrough performance, for one. As Norm, the “client” upon whom the entire story, its emotional twists and turns, hangs, Alonso masterfully fleshes out a tortured soul’s history, oftentimes in so many words crammed within so little time. In the end, it’s really this one character that you learn to pity, if not love, and root for, despite the depressing odds. (George Schulze alternates in the role.)

With Alonso, Twin Bill is now two-for-two in fueling excitement for this year in acting; its earlier production, the twisted Peanuts parody “Dog Sees God: Confessions of a Teenage Blockhead,” featured Vince Lim (of the Ryan Cayabyab Singers) in his breakout turn as a similarly tormented character.

More importantly, however, “Suicide, Inc.” elevates the theatrical conversation to something way beyond stagecraft. It deals with an issue that really needs to be talked about, and it does so in a manner that’s refreshingly uplifting.

Twin Bill has not only given us a fine production, but one that demands to be seen not only for its artistic merits but also for the kind of discussions it’s sure to generate long after the curtain has fallen.

A postshow discussion with a guest psychiatrist is held after every performance. Audiences are very much encouraged to stay for this; it’s the kind of enlightening talkback that rarely happens in the theater.