Achievement unlocked: How I got to be at the Tonys | Inquirer Lifestyle ❮ ❯ 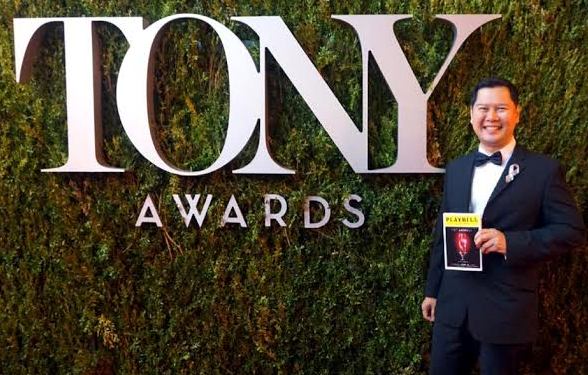 “I think my huge smile says it all. I am grateful beyond words to Jhett Tolentino for making this happen. Thank you to all who shared my joy in living a lifelong dream!” PHOTOS FROM MICKEY MUÑOZ’S FB PAGE

Achievement unlocked: How I got to be at the Tonys

Some people get a kick out of the Superbowl, NBA, the Oscars, Miss Universe. I get my high from watching the live telecast of the Tony Awards, for as long as I can remember.

I have actually collected 50 years’ worth of the Tonys on video—copied from Betamax, VHS, DVD formats and now on digital files.

Working in a TV/media company in Manila, I have somehow “lost” my excitement in meeting popular personalities, as they have become coworkers and friends. But my starstruck giddy feeling is revived whenever I am on Broadway and I get to see the stars perform live, and then emerge from the stage door.

So, aside from my obsession with watching the Tonys live, I kept wondering what it might feel like to attend the event and be surrounded by some of the biggest names on Broadway.

This year, the Tonys had to be transferred to Beacon Theatre, a much smaller venue that could seat only 2,900 (but a lot of seats were voided to accommodate the cameras and TV equipment for the coverage, so only around 2,500 seats were available). By comparison, Radio City Music Hall has a seating capacity of 6,000-plus, but it was booked for the Summer Spectacular Show.

The tickets and invites to this year’s Tonys were thus extremely difficult to snag. They were not even sold to the public. Most ticket requests from union and equity members were turned down.

Luckily, three-time Tony-winning producer and 2016 Tony voter Jhett Tolentino recognized my passion (bordering on obsession) for this event. As a Tony voter this year, he was entitled to two invites, but his request for more tickets was not granted.

I first met Jhett virtually, on Facebook, as I kept liking his posts and photos about Broadway. Eventually, he took notice of my theater posts as well, as it gave him updates on the Manila theater scene. We met unplanned at Lea Salonga’s concert at Town Hall several years ago, and again when he visited Manila in late 2015.

Jhett has won Tony awards as one of the producers of “A Raisin in the Sun,” starring Denzel Washington (Best Revival of a Play) and “A Gentleman’s Guide to Love and Murder” (Best Musical), both in 2014. In 2015, he got two more nominations—Best Play for “Hand to God” and Best Revival of a Play for “This Is Our Youth.”

So, with his invitation, I was set to attend the 70th Tony Awards. Wow!

Early on, people had accepted the fact that this was the year of the “HamilTonys,” with Lin-Manuel Miranda’s “Hamilton” having taken Broadway by storm. The big question of the night was how many trophies it would earn, and whether it would break the record of 12 wins set by Mel Brooks’ “The Producers.” “Hamilton” was nominated for 16; it would eventually win 11.

While the Tonys were about celebrating the best of Broadway and the theater, this year there was sadness in the air due to the Orlando shootings only days before. Spiels had to be revised, speeches customized, and special silver ribbons were designed by veteran Broadway costumer William Ivey Long to be worn by guests to show support for the shooting victims.

Guests started arriving at 5 p.m. and walked on the red carpet for the obligatory poses. Light snacks were served and Fiji water was given out because it was a sponsor. The gates to the venue were strictly closed at 7 p.m. as the preshow (hosted by Christian Borle and Nikki M. James) started promptly and special and secondary awards were given out.

Host James Corden had to tape a new opening spiel 15 minutes before the awards proper started. He said he wanted it done the right way and that he might tear up if he did it live. He got it in one take, but decided to do another take for technical safety.

In fact, Corden would end up providing so much life, energy and enthusiasm to the show. He was very charming, cheerful and pleasant! He successfully stepped into the hosting shoes previously filled by such power performers as Neil Patrick Harris and Hugh Jackman.

And that part when the aspiring Broadway kids transformed into this year’s nominated musical performers? Everything was live, and got appropriately wild applause from the audience.

During commercial breaks, scenes from the nominated plays and musicals were shown. Since the show aired live, there were monitors all around the venue indicating how many minutes each commercial gap would take, so one could plan his or her time going out of the hall for pee breaks. These breaks lasted no more than five minutes each.

Corden also did a “commercial karaoke” session during these breaks, with impromptu guests Jake Gyllenhaal and Sean Hayes (who sang “A Whole New World”), Jeff Daniels (singing “The Sound of Music”), and Andrew Rannells and Zachary Levi (“Mamma Mia”).

The HamforHam outdoor sessions which ushered in and out the commercial breaks worked. Not only did it involve more fans with what was going on inside the venue, it was also a more casual way of celebrating the Tonys’ 70th year—by featuring timeless Broadway hit songs. The best segments would include the likes of Sara Bareilles, Steve Martin, Edie Brickell, Lin-Manuel Miranda and even Andrew Lloyd Webber playing the tambourine!

A thrilling moment came when Filipino Clint Ramos won for his costume design for the play “Eclipsed,” which starred Lupita Nyong’o. It was a surprise win—naysayers said his textured and distressed Rugrats vintage T-shirt costumes for the play were “ordinary” versus the complicated period costumes of other shows. But there was Clint—Cebu-born and a product of Dulaang UP—feted on the Tony stage. What a proud moment!

The show was an overload of star power. Presenters included Barbra Streisand, Oprah Winfrey, Meg Ryan, Josh Groban, Carole King, Cate Blanchett, Glenn Close, Lucy Liu,  Jake Gyllenhaal, etc. Selfies with stars are “forbidden” (an unwritten rule, and part of awards night etiquette) but I managed to get a paparazzi selfie with Jessica Lange on my way out of the hall.

Ah, Barbra. One week before the show, Streisand confirmed her participation, but with no exact detail as to what she would do. Corden had publicly hoped she could be egged on to sing a song, but he failed. Her entrance was marked by the loudest audience gasps I’ve heard. After all, it was her first appearance on the Tony stage in 46 years! It was Streisand who handed the Best Musical award to Lin-Manuel and the “Hamilton” crew.

Throughout the show, we had to suppress our hunger; the ceremonies ended around 10:45 p.m. But my delight at simply being there in the audience boosted my adrenalin and energy.

The Tony ratings and viewership this year got a boost with 8.7 million TV viewers—a 35-percent jump from last year’s telecast. This complements the historic wins for “Hamilton” and the “diversity-personified” event that the 70th Tonys became, with all four musical acting categories won by people of color.

So there was reason to be exuberant, but the show, in many moments of tribute to and commiseration with the Orlando victims, was also simple, solemn, subdued and heartfelt, given the inseparable ties of Broadway and the LGBT community.

Each guest was given a special-edition Tony Awards Playbill. Compared with the regular Playbills given out for Broadway shows, this one was more like a booklet, with 170-plus pages of many insider stories on the nominated shows/actors and a guide to all nominees.

It’s a booklet I will never part with—evidence that I was there, among the audience, at the 70th Tony Awards. One off the bucket list!