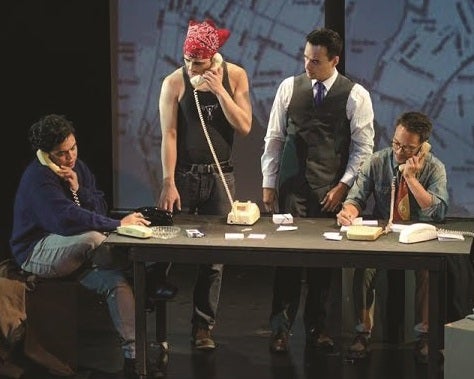 "The Normal Heart" is back for a one-weekend engagement on Aug. 12-14 at the Carlos P. Romulo Auditorium, RCBC Plaza, Makati City.

It was an experiment on my part to bring a 16-year-old girl to watch Actors’ Actors Inc. and The Necessary Theatre’s “The Normal Heart” on a lazy Sunday afternoon.

The story of pioneering gay rights advocate Ned Weeks who fights the establishment to try to save lives, I thought, could inspire my daughter in school and in her everyday life—for her to absorb the virtue of not giving up to reach one’s vision despite the odds.

It was also a way to introduce her to the likes of A-list theater actors Bart Guingona, Roselyn Perez and Topper Fabregas, among others.

“Daddy, there were people crying in the second act, near the end,” she said. She was also a bit teary-eyed after we caught a 3 p.m., Sunday performance of the play’s most recent run—its third since last year—at the 450-seat Peta-Phinma Theater at Peta Theater Center.

Surprisingly, my 16-year-old daughter, who was raised and is still based in a small town in the highlands of Cavite, liked “The Normal Heart” immensely. She has a gay best friend who she plays volleyball with on weekends in the village she grew up in.

From what I know, 16-year-olds like her are into Japanese animes, K-pop, Warcraft and crushes. But after watching the play, my daughter kept on talking about Ned Weeks. Now she’s been googling “The Normal Heart” and the issue of human immunodeficiency virus/ acquired immunodeficiency syndrome  (HIV/AIDS) more than Gudetama and Mario Maurer. Which goes to show that, despite the sensitive topic, this play, directed by Bart Guingona, succeeded in moving audiences’ hearts and minds, whatever the age.

The five-show run at Peta Theater Center was sold out. So “The Normal Heart” is back for another five-show, one-weekend run on Aug. 12-14, this time in its original home, Carlos P. Romulo Theater at RCBC Plaza in Makati City.

“I had always loved Larry Kramer’s magnum opus,” Guingona told us. “I read it first in the late ’80s. When one day in 2014, I came across a news article about the rise in HIV cases in the Philippines, I reread the play and was struck with the emotional and political resonance it had with present-day Philippines. A 30-year-old play resonating today?”

Last year when Guingona’s company first staged “The Normal Heart,” the Philippines recorded 22 new HIV cases a day. By March this year, according to the latest figures from the Department of Health, it’s up to 25 new cases a day.

“We have chosen to be negligent because it seems to affect only a marginalized sector—gay men,” said Guingona. “Who was it who said that you judge a society by how well it treats the least of its citizens? So, stubborn as I was, and against most advice, I sought funding for the play, and with sheer will power mounted it the first, second, third and now a fourth time.”

It’s never easy playing a man who is constantly on the warpath against a system and a mind-set, but until now he’s discovering new things about the character of Ned Weeks, said Guingona—“especially when he finally finds a love that softens him, exposes all his vulnerabilities, and he tragically loses that. It’s not easy.”

He said he understands Ned Weeks’ abrasiveness. “Our social standards may compel us to deplore his behavior, but it doesn’t change the fact that we need people like him.”

Weeks is playwright  Kramer’s alter ego in this largely autobiographical play. He wrote “The Normal Heart” at the beginning of the AIDS crisis in the United States, and specifically over his anger at being kicked out of the support organization he helped found.

“This was his way of telling his side of the story, his way of exorcising the hatred from his chest,” said Guingona.

“The Normal Heart” won for Guingona the best director award in this year’s Philstage Gawad Buhay Awards. It also won Outstanding Production of Existing Material for a Play and Outstanding Ensemble Performance for a Play, while the only female cast member, Roselyn Perez, bagged Female Featured Performance in a Play honors.

Guingona aims to tour “The Normal Heart” in other key cities in the Philippines as part of his AIDS awareness advocacy. He’s targeting Aurora, Zambales, Pampanga, Quezon, Cebu and Davao, “because these, apart from the NCR region, are the HIV hotspots.”

He’s also thinking of translating it to Filipino and bringing it to schools. Even 16-year-olds will love it—my daughter is proof.

“If you’ve seen the show, you’ll know what I’m talking about when I say it’s worth watching again,” he said. “It’s got so many nuances, so many layers that a single viewing may not be enough to capture it all. Some people see it as a play about activism, some about love, some about politics. The layers and complex characters will make for a satisfying second viewing.”

He added, “If you haven’t seen it, you should be prepared to be devastated. It packs the kind of power only the theater can deliver.”