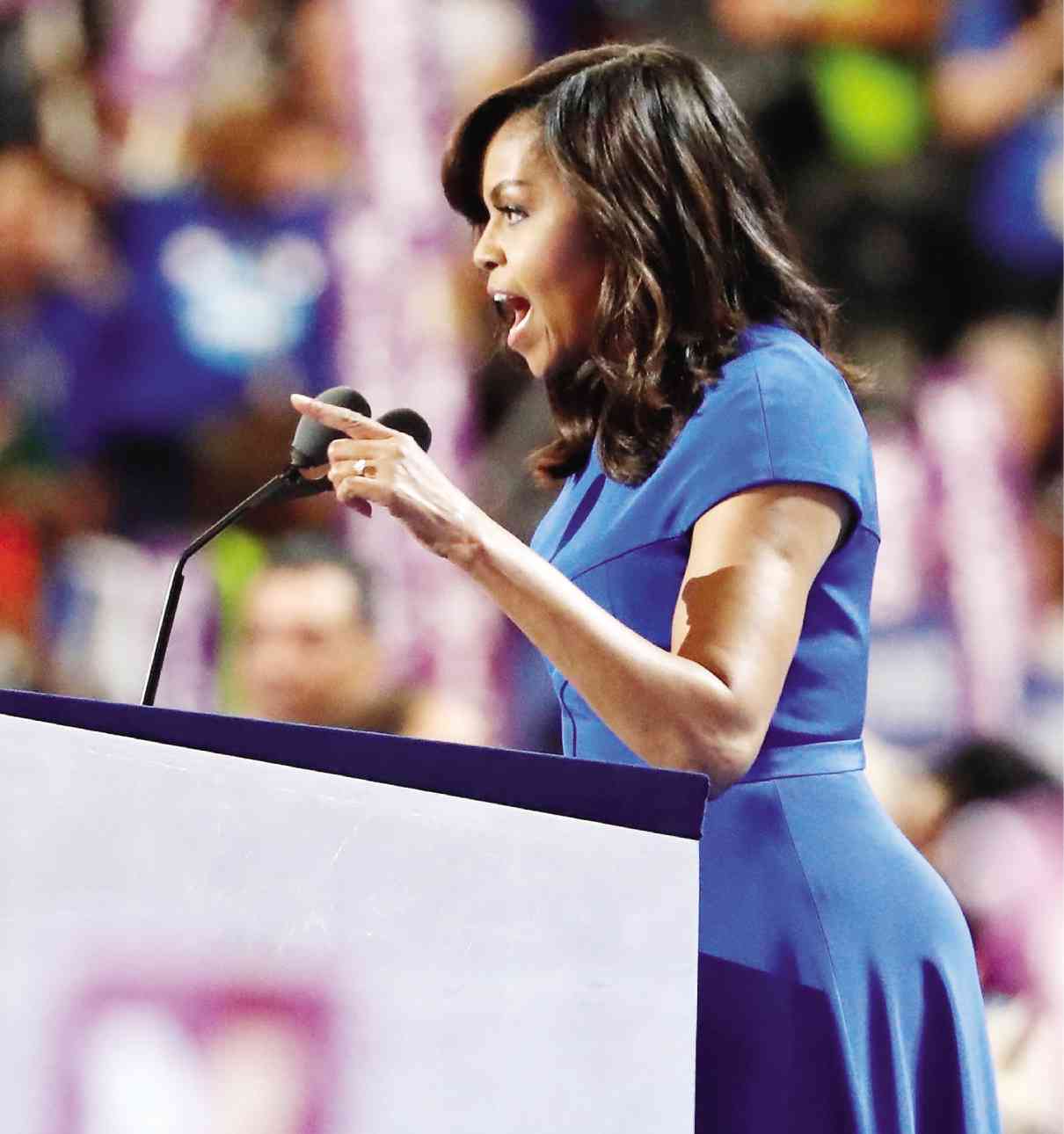 MICHELLE Obama at the Democratic National Convention in Philadelphia AFP

‘The presidency is about leaving something better for our kids’

IT IS hot and humid in Atlanta. But it’s always cool and comfy in my sister’s house. Outside it’s another story. There have been warnings issued for pets, babies and the elderly (in that order) to stay indoors.

And the heat goes on.

I left Manila the day of the presidential inauguration and here I am again right smack in the middle of the excitement of the US political conventions.

This year President Barack Obama steps down. His report card is excellent for some, not so hot for others. I guess it depends on where you stand. Or what you stand for?

I got a heads-up on Facebook to catch our Sona. I went online just at the end of Bayang Barrios’ stirring rendition of our national anthem.

It was the wee hours. I closed my eyes and held my breath. I listened.

“We cannot move forward if we allow the past to pull us back. Finger-pointing is not the way.

“Except maybe extract a lesson or two from its errors we will not tarry because it is the present that we are concerned with and the future that we should be prepared for.

“Lest I be misunderstood, let me say clearly, that those who betrayed the people’s trust shall not go unpunished and they will have their day in court.”

I also liked it when he said: “…there should never be a separation between God and State.”

Unlike most presidential speeches, this one did not bedazzle with flowery phrases.  That would be so out of character. I found it a tad too casual at times; just like the open-collar, rolled-up-sleeve barong. But to each his own, I guess.

“We are imbued with resiliency that has been tested and proven… As in the past, we have a bond to act together. We have to help each other. For then and only then can we truly prevail.” Truth!

Meanwhile, in Philadelphia, the Democratic Party nominated Hillary Clinton as its candidate for president. She acknowledged on video, live from New York amid loud cheering and a dramatic visual of the proverbial glass ceiling, shattered at last.

Clinton is now just months away from possibly becoming the first woman president of the United States.

Shucks, no biggie. We’ve done that twice, haven’t we?

US senator Cory Booker spoke on the second day. He quoted Maya Angelou. “You may write me down in history, with your bitter twisted lies. You may trod me in the very dirt, but still like dust, I’ll rise.

“Patriotism is love of country. But you can’t love your country without loving your countrymen and countrywomen. We don’t always have to agree, but we must empower each other, we must find the common ground, we must build bridges across our differences to pursue the common good.

I had to pause to catch my breath and take that in. Beautiful!

‘Heart of our hearts’

When US First Lady Michelle Obama came up to speak, the applause was deafening. I listened to her recent commencement speech at the City College of New York. Outstanding. It was moving, charming, intelligent, warm and credible. She was all that once again on the convention stage.

Ms Obama recalled talking to the delegates when her husband became the Democratic Party nominee for president.  She talked about her daughters, “the heart of our hearts, the center of our world.”

“I will never forget that winter morning as I watched our girls, just 7 and 10 years old, pile into those black SUVs with all those men with guns. And with all their little faces pressed up against the window, and the only thing I could think was, ‘What have we done?’

“At that moment, I realized that our time in the White House would form the foundation of who they would become. And how well we manage this experience could truly make or break them.

“That is what Barack and I think about every day as he tried to guide and protect our girls from the challenges of this unusual life in the spotlight. How we urged them to ignore those who question their father’s citizenship or faith. How we insist that the hateful language they hear from public figures on TV does not represent the true spirit of this country. How we explain that when someone is cruel or acts like a bully, you don’t stoop to their level. Our motto is, when they go low, we go high.

“With every word we utter, with every action we take, we know our kids are watching us. We as parents are the most important role model.

“In this election, and every election, it is about who will have the power to shape our children for the next four or eight years of their lives.

“I want a president with a record of public service. Someone whose life’s work shows our children that we don’t chase fame and fortune for ourselves; we fight to give everyone a chance to succeed.

“The presidency is about one thing and one thing only. It is about leaving something better for our kids.

“And as my daughters set out on the world, I want a leader who is worthy of that truth, a leader worthy of my girls’ promise and all of our kids’ promise. A leader who will be guided every day by the love and hope and impossibly big dreams that we all have for our children.”