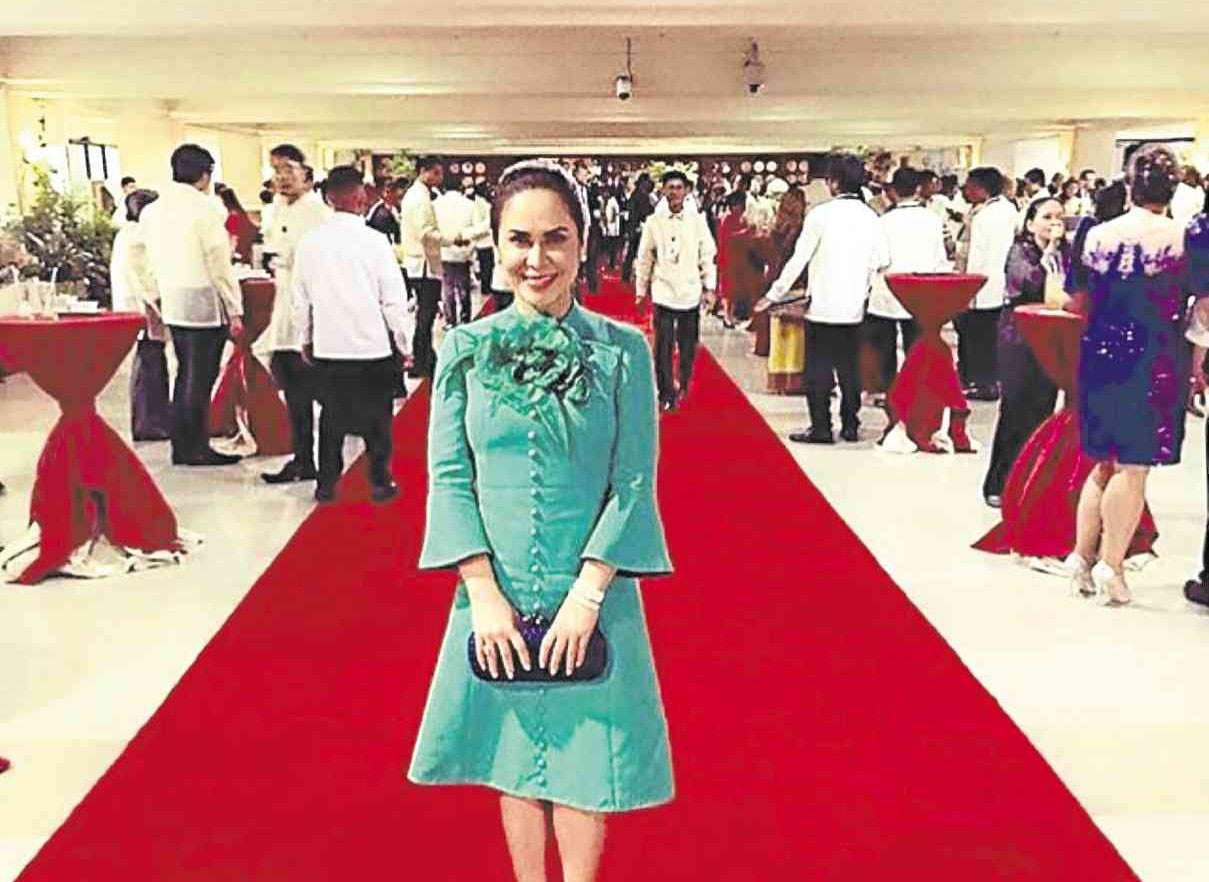 JINKEE Pacquiao so stylish in Gucci

MALACAÑANG’S directive to “downplay” President Duterte’s first State of the Nation Address (Sona) in a memo asking guests “not to wear long gowns” as “it will not be a fashion show” was met with approval by a nation that has largely been turned off by the display of pomp and bling at the annual speech of the Chief Executive.

At Monday’s Sona, it was clear the Palace’s advisory didn’t go unheeded.

Those who wore Filipiniana—the  dress code of almost all previous Sona—adhered to the prescribed length, which was no longer than the knees. Others opted to interpret “business attire,” the other suggested option.

One guest told a reporter that she was wearing “vintage”—presumably recycled, implying that  her government-official husband didn’t spend needlessly for it.

However,  her designer happily posted her image on Instagram, taking credit for the custom-made knee-length Filipiniana.

Fact is, how much these officials or their wives spend on their Sona garb isn’t measured by  their skirt length, or the sheen of their fabric, or the amount of beadwork or Swarovski crystals—or lack thereof—on their duds.

Malacañang’s memo came with good intentions, and we commend that. But let’s be clear: Shorter doesn’t necessarily mean cheaper or less extravagant. Just because it doesn’t have  much bling does not mean your official or his spouse spent less.

There’s nothing wrong with wearing the terno per se. It’s the national costume,  and must be worn with pride, and what better venue for that than  the Sona?

The problem is that many designers and clients don’t know the history of the national dress and that there are different types of terno appropriate for specific occasions. As artist, fashion design educator and book author (on the terno) Mark Higgins pointed out, “It’s not the terno, but the kind of terno. People should wear the terno to the Sona, just not those ternos.”

Those gowns we’ve seen in  past Sonas are not necessarily more expensive than, say, Jinkee Pacquiao’s Gucci dress at last Monday’s Sona.

Pacquaio’s dress was tastefully simple—it only had tone-on-tone buttons, and no glitter—but cost just south of $3,000. Her floral brooch, also Gucci, cost $580. Add to that her Manolo Blahnik pumps and Bottega Veneta clutch, and you’re looking at another $3,000—jewelry and watch not included.

A Chanel suit, for instance, easily costs north of P100,000—but it’s business attire, right? Well and good if the one paying for it has honestly deep pockets like the billionaire