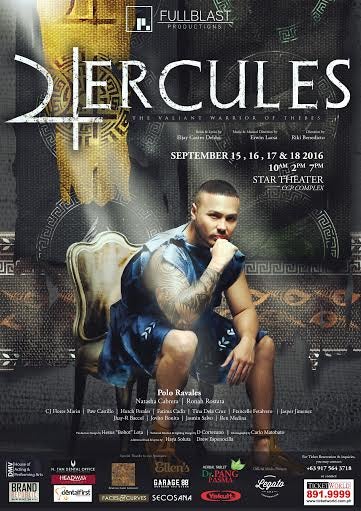 FullBlast Productions is mounting the original musical play “Hercules: The Valiant Warrior of Thebes” this  September, featuring Polo Ravales in the lead.

Direction is by Riki Benedicto, with musical direction and original music by Erwin Lacsa, a member of the Ryan Cayabyab Singers.

The script is by Eljay Deldoc, whose plays have been mounted at the Virgin Labfest and at Teatro Tomasino. He is a founding member of Tabsing Kolektib, a Manila- and Laguna-based theater guild that produces stage adaptations of Filipino contemporary literature. He has also written for television, among them GMA 7’s “Juan Tamad,” “Naku Boss Ko” and “Conan My Beautician.”

“Hercules: The Valiant Warrior of Thebes” is a retelling of one of Greek mythology’s most prominent legends. As told by Teiresias, the musical play chronicles the extraordinary life and journey of Hercules, a demigod whose fate brings adventures and heroic exploits.