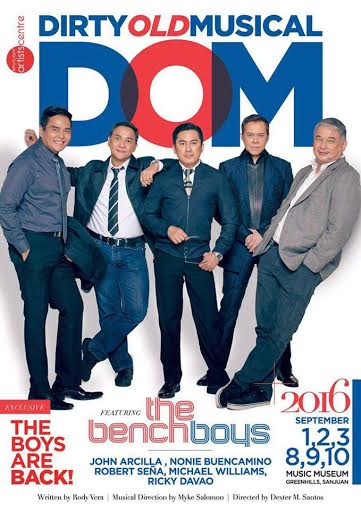 As early as age 43, many men undergo midlife crisis, which makes them feel discontented with their lives. They start to reminisce about the good old days, and try to revisit the pleasures of their youth.

“DOM,” the first original Filipino musical of Spotlight Artists Centre—which had previously mounted revivals of “Magsimula Ka!” and “Katy”—tells the story of The Bench Boys, an ’80s one-hit wonder teenage group that disbanded due to personal issues and is reuniting after a few decades to hold a benefit concert for an ailing former member.

“It’s called ‘DOM’ because right now they are no longer in their teens, they’re middle-age men in their 50s,” said director Dexter Santos. “Their reunion will open up issues, like erectile dysfunction and other physical changes that happen when you’re in your 50s, problems in terms of relationships, and unsolved conflicts that they will bring to their reunion.”

Salomon, who also did the musical direction for Peta’s box office hits “Rak of Aegis” and “3 Stars and a Sun,” pitched the story to Seña. It was his idea to do a jukebox musical, to better evoke nostalgia for the purported heyday of The Bench Boys.

“[What’s] exciting about it is that they were able to create a narrative out of these songs,” said Santos, who is also providing the choreography.

Vera said the biggest advantage in writing the script is that “we came from the ’80s… When I wrote the script, I wasn’t familiar with the songs, but what I did was suggest that the song should be about this, and that’s what [Robert and Myke] worked on.”

However, Vera, an award-winning screenwriter who wrote “REquieme!” and “Norte, Hangganan ng Kasaysayan,” said weaving five stories was quite a challenge, “kasi ’di naman pwedeng isa o dalawa lang ang may drama sa buhay, lahat sila. I think the challenge for me is how to reveal the stories that they are going to tell at what particular point.”

The powerhouse cast has the potential to occasion ego clashes, but “all of us have gone through the discipline of theater so I think we bank on that,” said Buencamino.

“Also, whenever we do theater it’s not for stardom, it’s not for money. We just do it because we like it, and there’s a message to share and we are just elated to work with one another. At the moment, egos are set side. I’d like to believe that.”

Arcilla, who played the title role of Heneral Luna in Jerrold Tarog’s film, said that, at this point in their lives, he and his accomplished costars are focused only on working and having fun.

“I think wala ng ego. Modesty aside, these people are all successful. We’re working on our rapport as characters, because that will be the magic of the show. Pag hindi, sasabog.”

Set design is by Mio Infante, lights by John Batalla and costumes by Raoul Ramirez.