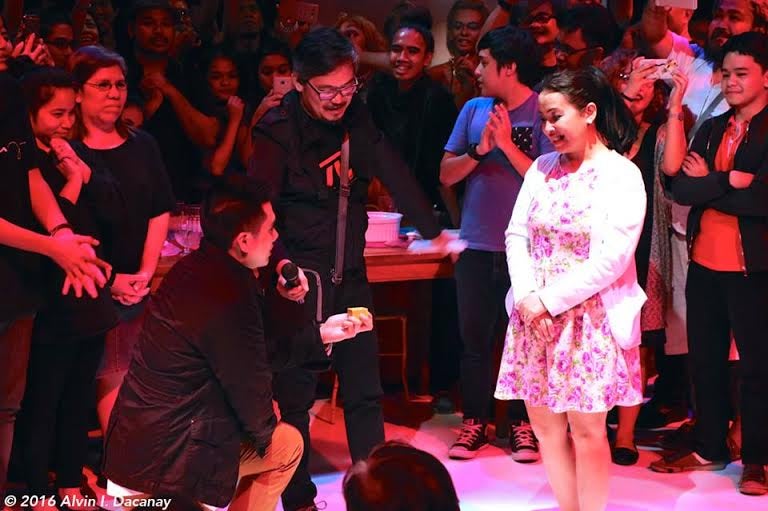 Yutaka Yamakawa on his knee asking longtime partner Adriana Agcaoili to marry him, at the close of Virgin Labfest 12 at Tanghalang Huseng Batute of the Cultural Center of the Philippines. PHOTO BY ALVIN DACANAY

A wedding proposal–in a theater festival

More than two weeks after actor-flight steward Yutaka Yamakawa proposed marriage to his longtime girlfriend, actress Adriana Agcaoili, they continue to receive congratulatory remarks and warm wishes in every gathering of friends they go to—even in wakes and funeral rites.

“Yes, and they make pakwento (requests to narrate the wedding proposal story),” Agcaoili said in a text message after the couple had just come from the wake of their friend, the departed theater-film actor Jonas Sebastian.

The marriage proposal that went viral on social media, various blogs and news websites took place near midnight on July 17, and it had all the excitement and spontaneity of live theater.

It was the final performance of virgin playwright Rick Patriarca and director Chris Martinez’s riot-of-a-comedy “Hapagkainan,” where Agcaoili played mother to a quirky family of four.

“Hapagkainan” was also the last play to be staged in this year’s Virgin Labfest, the annual festival of untried, untested one-act plays held at the 220-seat Tanghalang Huseng Batute of the Cultural Center of the Philippines.

For a moment, the audience members thought the marriage proposal was part of the final curtain call, a bonus fragment of a play or part of the closing spiel of festival director Tuxqs Rutaquio. He had just announced the three plays that would comprise the Revisited Set for next year’s Virgin Labfest, and many thought that was it. Goodbye, thank you, see you next year, let’s all vacate the venue.

Before a standing-room-only crowd of around 300, a good-looking leading-man type of an actor came up onstage. We thought he would propose to Rutaquio, whose famous stage role was Ada, the gay male alter ego of local superheroine Zsazsa Zaturnnah from the eponymously named original Filipino musical by Carlo Vergara.

Shrieks and screams filled the house, and it seemed the long wooden seat we were sitting on would collapse.

But the actor who went forward, Yutaka Yamakawa, had eyes only for the pretty lady in the white flowery dress onstage, his girlfriend Adriana Agcaoili.

Suddenly, cell phones and video cameras were trained on them to capture the moment. From the start, theater people had known what Yamakawa was up to, but first-time Labfest patrons began to realize it wasn’t an act anymore. Before stepping back, Rutaquio handed Yamakawa the microphone, and the couple were given ample space on the stage.

As the crowd’s screaming almost drowned out Yamakawa’s words, he said something about not knowing how to begin.

Agcaoili couldn’t speak, prompting playwright-director Nick Pichay, who was huddling with theater actors at the right side of the theater, to scream the loudest, “Oh, my God!”

Yamakawa produced a ring from his suit pocket, knelt on his right knee, and said, “Adriana, will you marry me?”

Pandemonium. Rutaquio had to raise his hand to signal the crowd to keep quiet as he handed the microphone to the teary-eyed Agcaoili. She could only say, after a few moments, “Hayup na binyag ito! (This baptism is something else).”

“Binyag” happened to be the theme of the Labfest. It was also Agcaoili’s first time to participate in the festival.

There was another pause, as the teary-eyed Agcaoili fell silent for what felt like eternity.

As if giving a director’s cue, Pichay shouted, “Say yes!”

“Yes,” Agcaoili said—and the crowd shrieked again. Yamakawa stood up and inserted the ring on her left ring finger. They kissed and embraced.

Endless warm embraces and handshakes with the couple followed as the crowd streamed toward the exit. It was like a fairytale ending.

Minutes later, Facebook statuses announcing the Revisited Set for VLF 2017 had videos and photos of the wedding proposal as accompanying images. The following days, it also appeared   on news sites and blogs.

Agcaoili would say later that she was oblivious to the setup. “No clue from Tuxqs at all. When he called me up after announcing the ‘Revisited’ lineup, I remember joking with Arnold (Reyes, her ‘Hapagkainan’ co-actor) that supposedly being ‘honored’ for my ‘return’ felt odd. Our age and supposed seniority were, after all, a running joke among our friends,” she said.

“It had been a very enjoyable run and, like most actors, I was riding all the emotions that came with the closing show. This happening was the most farfetched thing,” she added. “The proposal itself came like a lightning bolt. I haven’t quite recovered from it but we are both enjoying the aftermath—no discussion about the [wedding] date yet.”

Yamakawa said he initially wanted his closest friends to be with him that day but they were unavailable. He works as a flight attendant for AirAsia and was able to bring only one of his senior officers.

“Unfortunately, tickets to the closing show were sold out,” he recalled. What he did was to ask permission from Rutaquio and VLF production manager (of 12 years) Nikki Garde-Torres to do his proposal. As preparation, he asked around for ideas on how to do it since it was his first time to propose marriage.

Despite being an experienced theater actor—he was a resident actor for years at Gantimpala Theater Foundation before becoming a flight attendant—he had no time to rehearse his lines.

“So I improvised and spoke from the heart,” he said.

The couple met 14 years ago in Gantimpala Theater’s production of “Florante at Laura,” directed by Tony Espejo.

“I was playing Laura and Yutaka was in the ensemble, but he became Florante’s best friend, Menandro. He was easily the crowd favorite. A few years later, he rose to play the lead,” Agcaoili recalled.

It was not hard to fall in love with Yamakawa. Beyond good looks, talent and their common passion for theater, “he is a determined go-getter, but he reminds me to set aside time for myself,” she said.

Agcaoili’s day job is writing for, directing and hosting events, putting in occasional 20-hour workdays “and actually enjoying it.” But, because of her busy schedule, acting has taken a backseat.

Meanwhile, the life of a flight steward has always been, in a literal sense, off the ground. But despite their busy schedules, they find time to travel. “Easier now that he’s working as flight attendant, but the Philippines will always be home,” said Agcaoili.

Since they are both theater persons, they find something to like in everything they watch. Both are into musicals, singling out “Les Miserables” and Dexter Santos’ “Ang Nawalang Kapatid” as favorites.

Between them, Agcaoili is the more active in theater these days. Before VLF12, Agcaoili played the title role in Dulaang UP’s “The Duchess of Malfi” in 2013. For Gantimpala, she has directed “Kanser.”

She has also played Anne Frank for Behn Cervantes and Helen of Troy for the International Theater Institute’s Nikos Schiafkalis, alongside Cecile Guidote-Alvarez and Angie Ferro as Hecuba, Nora Aunor and Divina Cavestany as Cassandra, and Suzette Ranillo as Andromache.

She has done Shakespeare’s ladies like Juliet and Hamlet’s Ophelia for the Avellanas’ Barangay Theatre Guild. She has played Portia in “Merchant of Venice,” Katharina and Bianca in “Taming of the Shrew,” and both Countess Olivia and Lady Viola in “Twelfth Night.”

Under the direction of theater icon Tony Mabesa, she played her very first role in Tennessee Williams’ “Camino Real” and, most recently, the sex-crazed aristocrat in DUP’s “The Country Wife.”

Now she will play the role of Mrs. Yamakawa in the near future. “He and I come from drastically different backgrounds—he is street-smart and that’s fascinating,” she said.

Agcaoili’s parents are acclaimed writers T.D. Agcaoili and Ophelia San Juan. Family friends include the likes of the late National Artist for Literature Nick Joaquin (her godfather) and artist Ivi Avellana-Cosio (her godmother).

“But Yutaka has had to fend for himself, and has been supporting his family ever since he was young.”

It is this sensitivity to other people’s needs that has made him a naturally caring person, she said. “I appreciate how he is always helpful to and concerned about my family: my late mom, my brothers and my son Miguel.”

Yamakawa described Agcaoili as a very strong and loving person. “She is the kind of person who will stand up for the people she loves. She has fought for me and will never leave in times of trial.”

Not a surprise if, at this time, he’s not divulging yet the date and place for the wedding. For sure, a guy full of spontaneity would make it very special for Agcaoili. We can hear their theater friends in the background shouting again, “Oh my God, yes!”