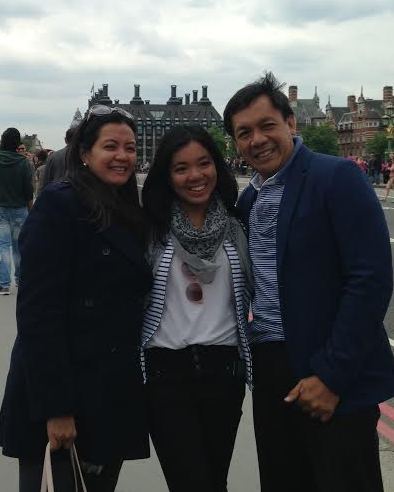 BAMBI, Tana and Joey Verzo in London. ALL PHOTOS BY PAM PASTOR

The first time I watched “The Phantom of the Opera,” I was seated beside Bambi Rivera-Verzo.

“Am I supposed to like the Phantom?” I whispered to her, wondering why I felt like rooting for the masked menace.

“Wait for the second act,” she said, smiling at me.

We were at The Teatro at Montecasino in Johannesburg, South Africa, weeks before Bambi’s company Concertus was set to bring the show to Manila.

For years that was what she did as producer—bring the biggest shows to the Philippines, shows Filipinos would usually have to travel to Broadway or West End to see: “Phantom,” “Cats,” “Mamma Mia,” “Wicked,” “Chicago,” “Singin’ in the Rain,” “Les Misérables.”

She told me in an interview in 2012, “I have always enjoyed bringing world-class shows to the Philippines. I had no second thoughts when given the chance to be part of the group that will bring ‘Phantom’ to our country.”

When they finally confirmed that “Wicked” was coming to Manila in 2014, she said, “This has been on our wish list for the longest time. We’re so excited about it.”

And she and her partners always wanted to do it right—no shortcuts, never short-changing the audience, whether that meant transporting 22 40-foot containers to bring “Wicked’s” Oz to Cultural Center of the Philippines (including Glinda’s $20,000 bubble dress), or making sure the 750-kg chandelier arrived safely so it could come crashing down the stage at every “Phantom” performance.

This was something I had the privilege of witnessing as we toured the backstage of production after production and met the people who worked tirelessly to stage the shows as perfectly as possible in Manila.

These past weeks, Concertus had been gearing up for the return of “Wicked” in 2017. Bambi was naturally excited, posting on Facebook, “Aching to see Emerald City again.”

The excitement was cut short when word of her being rushed to the hospital slowly spread. And then the heartbreaking news: she passed away on Sunday morning, too suddenly, too soon.

I had flashbacks of my moments with her. Backstage at “Cats” in Australia, watching her being transformed into one of the show’s felines and taking pictures as she gamely posed with her claws out. Arriving in Louisiana at two in the morning for the “Chicago” junket and telling her, while laughing, that she had inadvertently booked us in New Orleans’ most haunted hotel. On one of those nights, after enjoying cocktails at Hotel Monteleone’s revolving carousel bar, we were so terrified that BroadwayWorld’s Oliver Oliveros had to walk us to our rooms.

Also, geeking out at the “Chicago” opening tour party. Watching “Miss Saigon” at the West End and waiting for the cast by the stage door. Touring London with her husband Joey and daughter Tana. Being around her family was always a delight, their closeness inspiring.

Taking too many pictures at Hobbiton and keeping tabs on one of the UST-La Salle UAAP finals games all the way from Auckland where we had traveled to watch “Wicked.” Bambi and Tana were rooting for La Salle and I was cheering for UST. We were already in our hotel rooms, but Bambi and I continued to text. “UST winning! Syet! Tana about to cry hahaha,” she messaged me.

“Homigas!!!” came another message, when she found out the game went into overtime.

Whenever I wrote a piece about any of their productions, she always made it a point to text or e-mail. “Loved your piece!” or “You made my day!” You’ll be surprised at how rare thank you’s can be in this industry, but she never forgot.

And it wasn’t all about work for Bambi.

“Cheers to the birthday girl!” she’d message me on my birthday. She’d reach out and ask about my dog or talk about relief efforts I was participating in. “Amazing energy… bless your heart!”

We exchanged Facebook messages when she and Tana were traveling in New York. I had sent them a list of food tips and I told her that I loved how they’re such travel buddies. “Our bonding time!” she wrote back.

The last time I heard from her was through Instagram just a couple of weeks before she died. “Go girl!!!” she posted a comment on a photo of me stretching with the Nike Run Club. I could still hear her voice.

I am just one of countless people who have so many precious memories of her.

Tessa Prieto-Valdes said, “Thanks to Bambi, I experienced what it’s like to be part of the cast of many Broadway productions, walking backstage and viewing the costumes and wigs. Most memorable was onstage with the ‘Wicked’ cast as they gave their donation to our charity which was made possible through Bambi. Just too many fond memories and travels and parties—‘Cats’ party in my house, South Africa, Australia, Singapore and New Zealand trips… Endless shopping, too. I even got her luggage allowance! Will totally miss her.”

Bambi’s passion for theater was inspiring and infectious. The number of times she and Tana had seen “Wicked” had become a running joke for us.

“Overwhelming response the last two days… unbelievable!” she’d text, and I could feel her joy through my phone screen.

“All out for Manila fans!” she texted one time.

Bambi worked hard behind the scenes, and behind the scenes was where she liked to be, often resisting the spotlight. I usually had to twist her arm just to give me a quote for a story. She’d much rather put the focus on the cast, the crew, the show.

She made the hard work look effortless, managing to glow at each gala night and welcome her guests with a warmth that was purely Bambi. That was another thing about her—she always looked delighted to see you.

And she still had so many plans. “Next Stomp all Pinoys! Dream project,” she texted me after another successful “Stomp” run.

She may have been bringing in foreign productions, but letting Filipino talent shine was important to her. Like Lea Salonga in “Cats,” Rachelle Ann Go in “Les Misérables” and all the Filipino musicians who joined the orchestra of each show.

“I am proud to say that Filipino musicians will be part of the Manila season,” she’d say each time.

She was gracious, smart, warm, kind, fun, funny. She was cool, too, and open to even my strange ideas—like when I wanted to do a butterbeer taste test with the cast of “Potted Potter” or when I decided to compare “Chicago” with “Orange is the New Black.”

When I heard about her being in the hospital, I sent her a Facebook message. “All my love and prayers for you, Ms. Bambi. Fight fight fight! Can’t wait to see your beautiful smile again <3 <3 <3.”

But the next time I saw her smile was on the tributes posted on her Facebook wall and her beautiful pictures at her wake.

On the last night of her wake, I sat there surrounded by the people who love her, recognizing many of them from her stories. Her mom who she loved so dearly. Her sister who has adorable dogs.

The Concertus girls sang “Defying Gravity” for her. One of them, Sam Sewell, said, “Ms. Bambi taught me that women can do it. She’s empowered me in that way.”

A former colleague at Shangri-La said, “She has the biggest heart. This is what she would have wanted, a celebration of life.”

The song “For Good” from “Wicked” has been playing in my head for days, ever since I heard the news.

I remember sitting around a restaurant in Auckland at a table full of people singing that beautiful song, probably to the annoyance of the other diners. We didn’t care, we were high on “Wicked.” Bambi was sitting in front of me, laughing and singing along.

That’s how I’d like to remember her—alive, vibrant, laughing, singing songs from the musicals she loved and shared with so many of us.

Anna Yulo, who worked with Bambi in Concertus, wrote, “There’s a Bambi-shaped hole in my universe.”