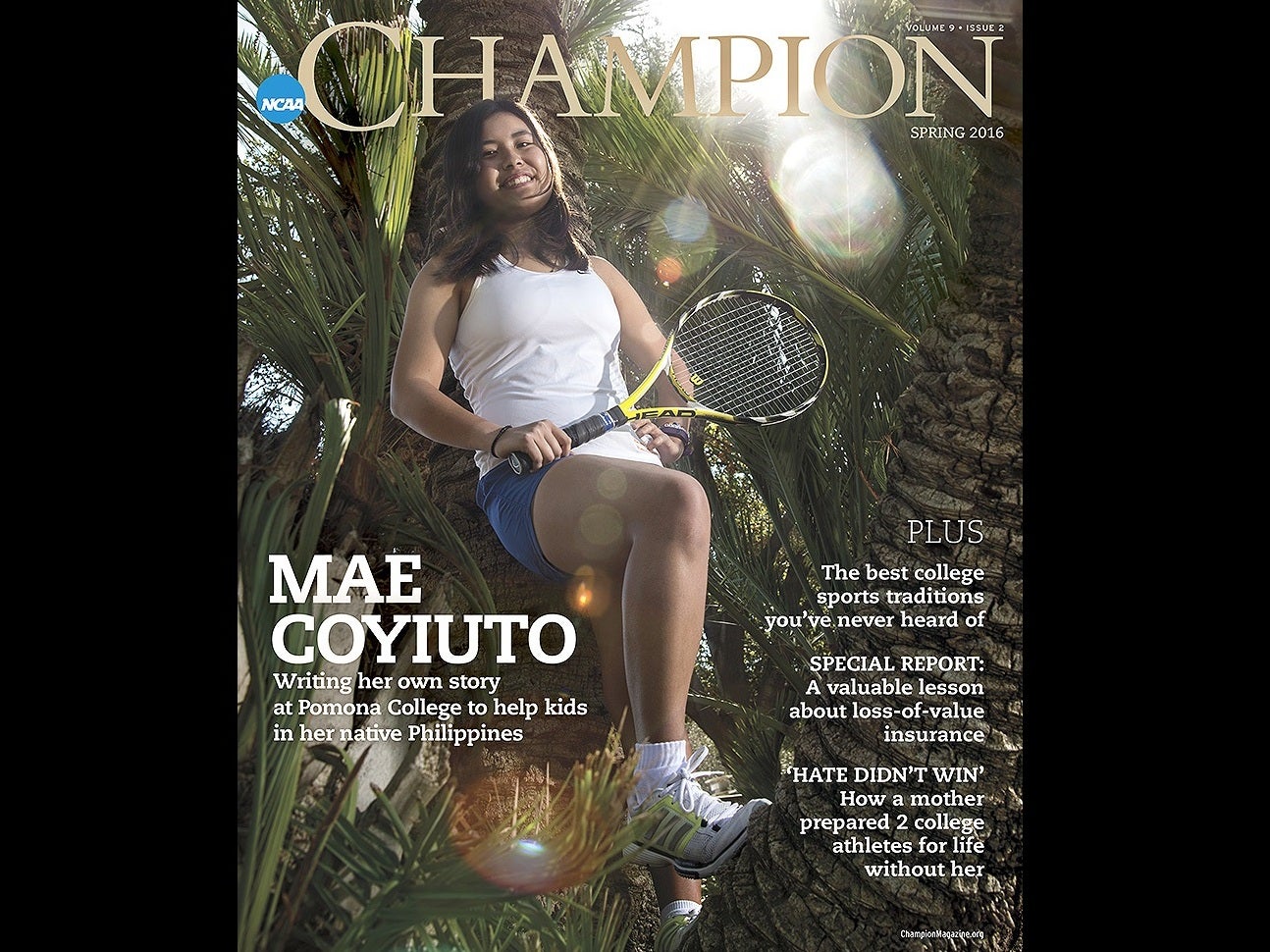 ‘Amazing’ Samantha Mae Coyiuto is back on the tennis court

Filipino student athlete Samantha Mae Coyiuto—who is also a published author, philanthropist and the Philippines’ former top-ranked junior tennis player—is on the cover of the Spring 2016 issue of Champion, the official quarterly magazine of the US National Collegiate Athletic Association (NCAA).

Champion documents the sporting achievements of present and former NCAA athletes, be they from the US or other countries, as well as controversial issues in the world of US collegiate sports.

Written by Rachel Stark, the profile of Coyiuto not only chronicles her journey from a child who would mimic the activities (including tennis) of her older sister, to a young woman who lives away from her family on an athletic scholarship with the Pomona-Pitzer Colleges women’s team. The team represents a consortium of US schools including Coyiuto’s own, Pomona College, a liberal arts institution in Claremont, California.

The four-page spread also details Coyiuto’s work outside competitive sports, showing how the 21-year-old has turned her creative writing into a means for sharing her love of books and, in the process, inspiring Filipino kids to aim high.

Jamie Schwaberow’s photography captures the modesty and simplicity of his subject—looking at Coyiuto’s images, you wouldn’t think that one so young and unassuming has already achieved so much.

We met Coyiuto in 2011, when she was 17 and close to graduating from high school. She had set her sights on a tennis scholarship in the US, a country that has produced some of the biggest names in the sport.

Inquirer Lifestyle featured the youngster after she was named Adidas brand ambassador. The sportswear label handpicked local student athletes for its “All In” campaign, in recognition of their achievements in sports and beyond.

Coyiuto was a perfect fit.

Not only was she in the top rung of the national juniors rankings; she’s a published author and budding philanthropist, too. Anvil Publishing released three of her children’s storybooks, all written when she was 10, and later, a collection of short stories for young adults (YA) called “Flight to the Stars.”

In line with the writing, Coyiuto launched Are You READy Foundation, which promotes literacy and, as an offshoot, finances projects that encourage kids to  realize their dreams.

Coyiuto told us she wanted to build a public children’s library, so those with little or no access to books can read to their heart’s content.

In just nearly five years, this athlete with Federer-like composure on court (no shrieks, grunts or self-scolding) has become living proof of her own advocacy: Dream big. Work hard. Don’t quit.

The only difference this time around is that Coyiuto’s audience has expanded, and a more diverse sports community has noticed her endeavors.

With no makeup, screaming nail polish, and flashy accessories, Coyiuto wears only her usual tennis gear and a friendly smile for the Champion cover shoot. Her face is illuminated by sunlight streaming through the leaves of a palm tree, on which she was made to perch by Champion creative director Arnel Reynon and photographer Jamie Schwaberow.

Stark wrote in an introduction that the trees in the photo shoot, held on the Pomona campus grounds, had more than just aesthetic value.

“Reynon, who is Filipino-American, and Coyiuto, who came to the United States from the Philippines for college, both say that palm trees remind them of the Southeast Asian country,” said Stark. “There, the trees are prevalent, often used for their fruit and to make goods such as mats, baskets.

“Rooted on campus but reminiscent of home, the unexpected photo-shoot perch proved to be perfect.”

“Amazing Mae,” the title of the magazine feature, was based on a moniker used by friends and peers of the athlete-writer-philanthropist.

Champion relays Coyiuto’s backstory, starting with her Chinese immigrant ancestors who rose from humble beginnings to become successful entrepreneurs. Her parents, a businessman dad and a painter mom, along with her siblings, have influenced and helped the youngest in the family navigate the life of a multihyphenate.

Coyiuto already had her hands full with commitments in academics, tennis and writing, yet was able to follow through with her library-building plans. Between high school graduation and flying off to California for college, she oversaw the facility’s groundbreaking in the coastal city of Navotas. These days, wrote Stark, the library serves a newly established community of about 500 families whose lives had been wrecked by typhoons.

Coyiuto was also reported to have organized workshops for creative writing and art, funded with $10,000 from Davis Projects for Peace, which finances deserving philanthropic ventures by students. She secured museum space as venue and staged an actual graduation ceremony for the 30 sponsored students when the workshops ended.

Ann Lebedeff, Pomona-Pitzer tennis coach who has been in the business for 40 years, was quoted in Champion, saying, “Mae is one of those special kids you don’t even get once a decade. Maybe two in a career.”

It seemed Lebedeff wasn’t referring only to her charge’s creative pursuits, but also her drive to push her athletic limits. Injuries weren’t enough to stop Coyiuto from playing matches, and she repeatedly did not inform her team—not until a serious cartilage injury threatened to snatch her away from tennis for good.

In January last year, her love for tennis compelled Coyiuto to undergo the procedure that would address the labral tear causing the pain in her hip. While recuperating back home, she wrote her fifth book and first YA novel, “The Year We Became Invincible.”
The title is quite the opposite of what Coyiuto, now back at Pomona for her senior year studies as well as on the tennis court, has experienced. Then again, “amazing” is a great way to describe  people who  pick themselves up even after a bad fall—like Coyiuto.