An ‘alley’ full of art in a Makati warehouse | Inquirer Lifestyle ❮ ❯ 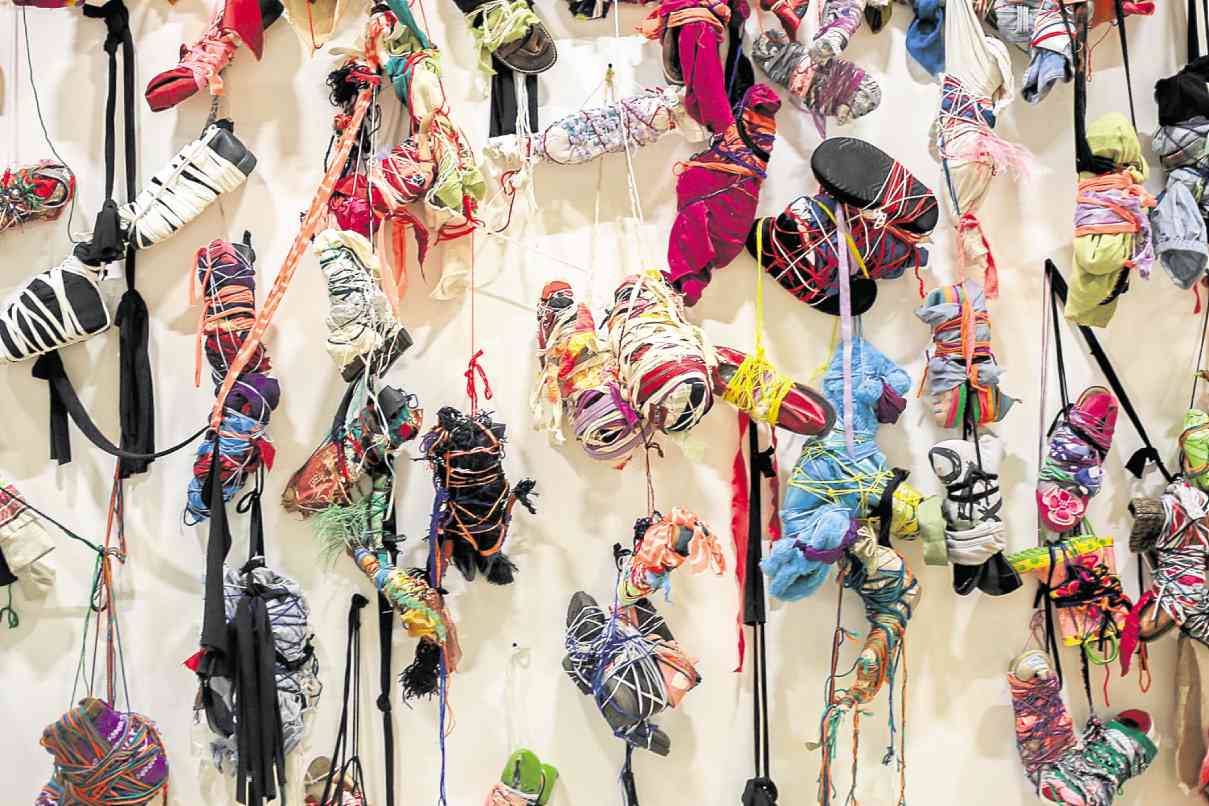 An ‘alley’ full of art in a Makati warehouse

SLOWLY generating buzz as the soon-to-be-hottest lifestyle hub in Makati is Karrivin Plaza’s The Alley, a (so far, still) quiet strip of well-curated establishments in Makati City that promises to merge good food, fine taste, intriguing art and great coffee.

The novel mix is the brainchild of Mara Coson, scion of the Shoemart retail empire, whose job it was, as she said, “to see what can be done to transform a dilapidated warehouse” hidden in a corner of the property.

The hulking structure boasts a space measuring 2,000 square meters or so, left idle with the transfer to new addresses of high-end stores and a sporting venue that it hosted before it was acquired by BDO Unibank, Inc. a few years ago.

Coson said BDO initially planned to demolish the warehouse and construct a spanking new building in its place. But BDO chair Tessie Sy-Coson’s daughter had another idea.

‘People look for high-ceiling areas not necessarily tied to a mall or encased in concrete, so we might as well try and see what can be done here, give it a shot and see what we can do to transform this warehouse,” she told Inquirer Lifestyle.

Coson, who described herself as procurement manager (“Generally, my mom asks me to do something, and I do it”), broke into a shy giggle as she recalled telling her mother about what she thought.

“I convinced my mom. I thought it would be great for galleries to have higher ceilings, still here in Makati, without the lease costing an arm and a leg. The art scene in the Philippines has lots of energy. It’s huge and super wide and great, but sometimes it’s hard to get from one place to another,” she observed.

So why not put the great ones together in one place, tuck them together in a reworked warehouse, feature a single narrow entrance and call it The Alley?

Coson remains humble about her creative side. (She writes, and was once featured in a Best Dressed list.) But her awareness of what constitutes relevant good stuff is evident in who she invited.

Next door neighbor Toyo is a renegade Filipino restaurant owned by Jordy and May Navarra, where even Coson has difficulty booking a seat.

A few steps south is Aphro, a furniture-art-concept store owned by Tina Fernandez—the force behind Art Informal gallery on Connecticut Street, Greenhills—that was a flurry of sawdust and paint fumes as it prepared for an open house during our visit.

Across the tile-laden alley is Writer’s Block, a quaint 15-sq-m coffee and tea haven owned and managed by young businesswoman Jackie Arceo.

On the western side of The Alley is the new address of The Drawing Room owned by Jun Villalon that currently hosts two exhibits: Ged Merino’s soft sculptures in “Transitional Objects,” and a mysterious collection of thread and textile art by Merino, Raffy Napay and Aze Ong called “Common Thread.”

Still under construction are the shops of Hydra Design Group, a design studio that Coson said would have Dan Matutina of Plus63 Design Company and Inksurge Graphic Design Studio, at the far end of The Alley, and Jam Acuzar’s nonprofit art space on the second floor.

Coson described Hydra as “a handful of design studios coming together. Usually, there is a venue in Alabang, another one in Quezon City and still another in Pasig. Sana one place na lang, so there’s Hydra Design Group.”

Acuzar’s venue would have a residency program for chosen artists. Coson said Acuzar, the director and founder of Bellas Artes projects, “decided to open a place in Manila since it is hard for some people to go to Bataan.” (Las Casas de Acuzar is the tourist attraction featuring restored old houses in Bataan.)

“Jam would host exhibits, screenings and talks. It would be really interesting, a nonprofit with a completely different approach. I’m really excited about that one,” Coson said.

Its specialties are an earthy and chocolatey blend called Atok, named after a mountain in Benguet, and the peanut-and-caramel-infused Matutum, a nod to the famous peak in South Cotabato.

Aphro’s Fernandez is busy sprucing the gallery for the open house. Pottery is focal point with pieces by Pablo Capati, Joey de Castro, Jon Pettyjohn, Winnie Go and Joe Geraldo in strategic places, where they can be admired by guests.

The must-order, however, is Lanai’s iced coffee with carabao’s milk that Licaros said is an homage to the Zobel sisters’ treasured family recipe.

Coson implied that the passion showed by tenants only validates the decision to repurpose the warehouse.

“The tenants have a different take on everything. They have the freedom to do what they like. Do I manage The Alley? I don’t have a formal role. My day job is in SM,” she said.