Fil-Am Ali Ewoldt is first Asian to play Christine in ‘Phantom of the Opera’ on Broadway | Lifestyle.INQ ❮ ❯ 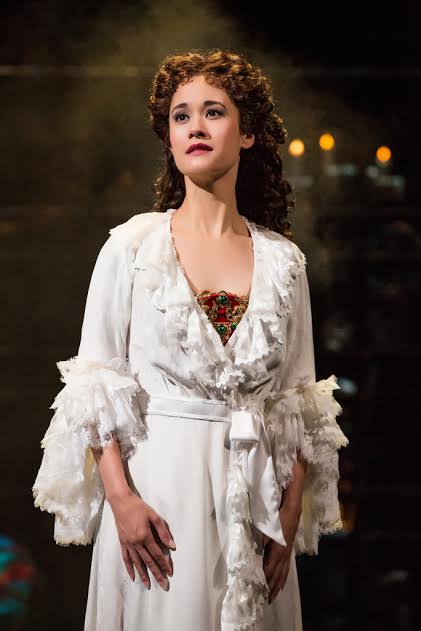 Ali Ewoldt: “I want to show that this incredible story can be told regardless of my personal ethnic background.” PHOTO BY MATTHEW MURPHY

Filipino-American Ali Ewoldt is currently playing the role of Christine Daaé in the Broadway production of “The Phantom of the Opera,” and it marks a milestone: She is the first actress of Filipino descent and first woman of color to portray the role on Broadway since it opened in 1988.

“It is incredibly exciting!” she says. “I have loved ‘Phantom’ and dreamt of playing Christine since I was a child, so to get to play Christine is literally a dream come true.”

Ewoldt, whose mother hails from Pangasinan, was born near Chicago and raised in Pleasantville, a short distance from New York City. She’s been performing the role since June.

“Being the first Asian-American Christine on Broadway is an honor and, also, I believe, comes with a bit of responsibility. I want to demonstrate that this incredible story can be told regardless of my personal ethnic background.”

Ewoldt recently played Tuptim in the Chicago Lyric Opera production of “The King and I” opposite Fil-Am actor Paolo Montalban as the King. She previously understudied the role as an ensemble member in the 2015-2016 Broadway revival.

To prepare for the role, Ewoldt revisited the Gaston Leroux novel the musical is based on. “And, of course, I spent many hours learning all of the songs,” she says.

She credits “many, many years” of vocal training and ballet classes in honing her skills. She also praises the musical theater program of her high school, Pleasantville High School.

Ewoldt is still connected to her Filipino roots. Though she has become a pescatarian and finds choosing Filipino dishes a bit tricky now, she’s still able to enjoy sinigang and turon.

“Growing up Filipino, music was always a part of my family gatherings,” she adds. “My eldest aunt, my Tita Myrna, took me to some of my first Broadway shows and my parents continued that tradition when they realized how much I loved watching them.

“My parents were always incredibly supportive, shuttling me to dance classes and voice lessons, etc.”

One of her first jobs was “Disney’s Aladdin: A Musical Spectacular” at Disney California Adventure theme park, where she was the Jasmine body double.

Ewoldt made her Broadway debut as Cosette in the 2006 Broadway revival of “Les Miserables.” She was able to share the stage with Lea Salonga when the latter was cast as Fantine in 2007 (Salonga was the first Asian to play this role on Broadway).

Other credits include Maria in the national tour of “West Side Story,” chosen by the musical’s book writer Arthur Laurents to play the part, and Luisa in the off-Broadway production of “The Fantasticks.”

“The Phantom of the Opera” runs at Majestic Theatre in New York City. In 2012, Concertus Manila produced the Manila leg of a touring production from Australia.