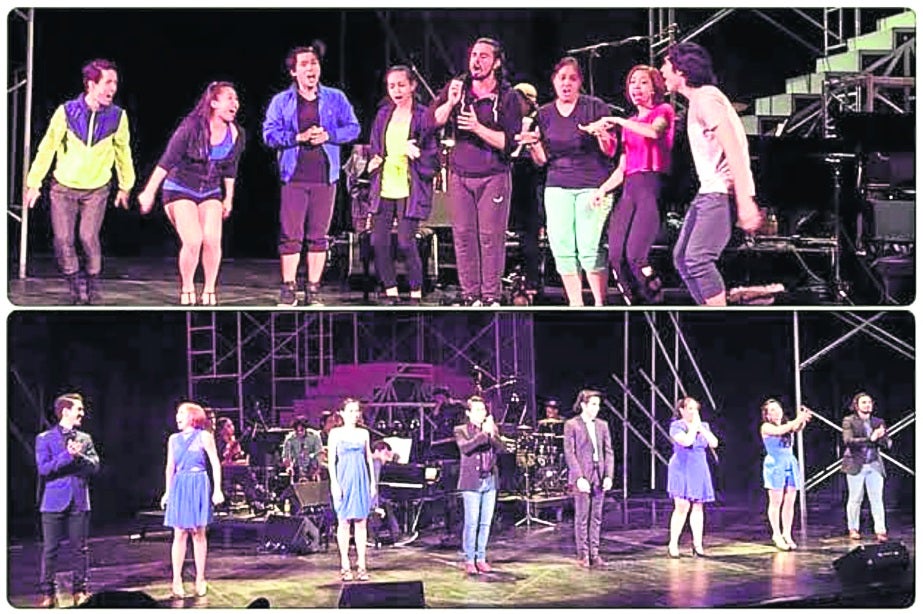 It wasn’t only the “fourth wall,” or that imaginary boundary between the audience and the performers, that was broken during “Breaking the Fourth Wall,” the concert that launched the fourth year of the Triple Threats series of musical performances at Cultural Center of the Philippines (CCP).

For one, this year’s shows are shining the spotlight not on individuals, but on “the ensemble.” “Breaking the Fourth Wall” gathered Abi Sulit, Chinie Concepcion, Maronne Cruz, Kyla Rivera, Vince Lim, Nacho Tambunting, George Schulze and Steven Hotchkiss
—though how this grouping came to be wasn’t overtly stated (availability, perhaps, being the chief curator?).

There was also the breaking of a record of sorts: Since its inception, the Triple Threats series had been churning concerts of consistently excellent performances and production values, from Audie Gemora’s and Menchu Lauchengco-Yulo’s in 2013 all the way to Vincent de Jesus’ last year. (For this writers’ money, Bituin Escalante’s in 2014 remains unrivaled.)

So why did this year’s opener feel more like a senior year recital of some bachelor of fine arts program rather than an actual concert by professional artists?

This, despite the set list, which read like a best-of-Broadway compilation. One can only imagine what a magnificent album that would have made if the best of local musical theater were  ever gathered to do it.

Alas, here it only felt endless, and magnificent the actual evening wasn’t. Did the performers have enough rehearsal time to polish their numbers, especially since most of the songs required belting notes of the inhuman kind (“Defying Gravity” from “Wicked,” “Astonishing” from “Little Women,” “You There in the Back Row” from “13 Days to Broadway”)?

Liesl Batucan’s direction also didn’t push the show down a stronger, more cohesive path. Some of the performers could have toned down their occasionally borderline-histrionic interpretations of the songs (this was a concert, not a full production), and many of the numbers could have stood some trimming. Which makes one think if the evening coming off as a long audition was really the intended effect.

The upside to many of the numbers being performed in full, however, was the chance to listen to musical director Ejay Yatco’s orchestrations, and the bits and pieces of genius sprinkled in the way he wove the medleys.

A couple of highlights were his repetition of the opening chords of “Defying Gravity” flouting expectations during the “Broadway Divas” medley; and how, in the finale, “Louder Than Words” from “Tick, Tick… Boom!”—where Yatco provided a rare peek at his fine singing voice—segued into “Heart and Music” from “A New Brain,” and then to “Seasons of Love” from “Rent.”

There were numerous guest performers throughout the night, but curiously enough, none of them did an actual ensemble number from an actual musical with the performers.

Some of them did serve as learning points for the performers, as if to say, “This is how you do it, kids.” A pregnant Sweet Plantado-Tiongson fully and soaringly belted out “Meadowlark” from “The Baker’s Wife”; Carla Guevara-Laforteza’s “Woman” from “The Pirate Queen” was a master class in vocal technique; and Audie Gemora once more demonstrated his unparalleled skill at musical phrasing and enunciation with Kerrigan and Lowdermilk’s “One Last Prayer.”

Among the “auditionees” (we may as well call them that), it was Sulit and Lim who really distinguished themselves.

The former nailed a trifecta of Black Women parts—“And I am Telling You I’m Not Going” from “Dreamgirls,” “Home” from “The Wiz” and the female soloist in “Seasons of Love.” The latter proved the most accomplished voice of the eight, even as his take on “I’m Alive” from “Next to Normal” was marred by a malfunctioning microphone.

Oh, yes, the sound was also another thing that was broken. For lack of a more sober word, it was awful.

What was it, exactly? A device problem? A glitch in the transmission? Someone sleeping on the job? Concepcion’s lapel mic sounded the worst, and it mind-bogglingly remained in horrendous shape throughout the show.

By CCP standards, the sound design was a train wreck that sent the entire evening on a downward spiral of no return.

“Breaking the Fourth Wall” took place on Aug. 18 at CCP Little Theater. The next installment of the series, “Koro/Nasyon,” will play on the same venue on Sept. 8.