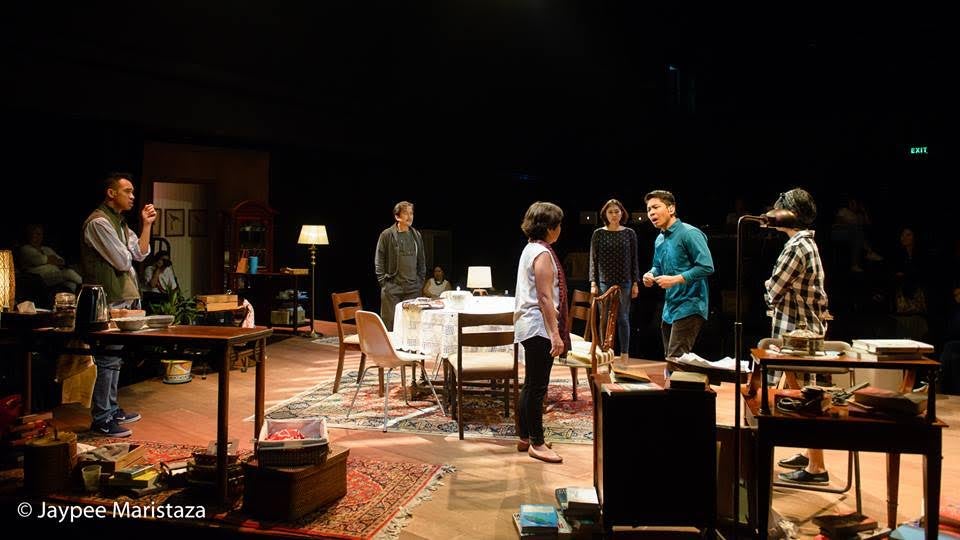 Red Turnip Theater’s production of “Tribes,” written by Nina Raine and directed by Topper Fabregas, is one of those plays that beg for repeat viewing.

The issues being explored, the layers of meaning expressed in every scene, the dynamics played out in the characters’ relationships—and their interpretation by the topnotch ensemble Fabregas has assembled—draw the viewers in slowly but compellingly. Pretty soon, the audience is enmeshed in the daily frictions and emotions of this particular family.

But while the disruptions that threaten to rip apart this brood of hyper, brilliant but unsuccessful intellectuals become painfully familiar to viewers, the fourth wall remains intact and the identification never becomes total.

And that’s how the journey becomes rewarding. Just when one character or family dynamic starts becoming recognizable, something else jars that bond between character and viewer. The call to explore never really stops.

The emotional and mental maelstrom this family goes through—and by extension the audience—is like an endless but enticing stretch of land waiting to be explored. Just as soon as one beachhead has been established, another region opens up.

The titular “Tribes” apparently refers to subgroups within the community of the deaf-mutes. This marginalized group, fighting for rights of inclusion, has its own unspoken pecking order where, for example, the natural-born deaf is regarded as more privileged than his  second-generation peers who, because of genetics, lose their own hearing abilities over time.

Yet, the title can also indicate the individual islands of isolation each character, deaf or not, has built around himself or herself, perhaps to prevent a painful confrontation with their own worst fears.

Christopher, the patriarch, is a retired professor who measures his relevance by the intellectual tyranny he imposes on his supposedly less talented wife and children. Teroy Guzman  plays him with a mixture of know-it-all snobbishness and the erratic emotionality of a man who secretly fears his glory days are over.

His wife, Beth (Dolly de Leon), is a would-be writer who can’t make significant headway in the literary world and can barely keep together her own splintering home. Their first two older children, Daniel (Chris Pasturan) and Ruth (Thea Yrastorza), are also failures in careers that would have enabled them to fly the coop. They depend on dear old dad, who never ceases to remind them they’ve overstayed their welcome.

The one saving grace is Billy (Kalil Almonte), the deaf youngest son whose condition appears to protect him from the low-level warfare going on around him. To his family, Billy is the “innocent” who must be protected from the ugly world outside. Because they don’t feel threatened by him, each of them can, in his or her unique way, show him the unconditional love they can’t express to the rest.

That fragile peace is threatened when Billy’s new girlfriend Sylvia (Angela Padilla) makes him part of the bigger deaf-mute community and shows him the world outside. Once Billy starts asserting his “rights” and tries to integrate himself into his contentious family, every insecurity and aspiration that has been stashed deep in this setup finally surfaces.

One of the more pivotal scenes comes near the end of Act 1. Angela’s independence and confidence unwittingly shine a light on the fissures in Billy’s family, and as she tries to heal the gaps she has exposed by playing a piece of music, the truth comes out: Ironically, it is the two deaf individuals in the room who can communicate clearly, while the able-bodied try  but are miserably failing.

It is a tribute to the true ensemble work achieved here that these characters become all too sympathetic and human. In the hands of lesser actors, the nonstop bickering would have been an invitation to just tune out. But Fabregas allows each character to peel off the crust of fear, selfishness and confusion, to show the heart that beats within them.

Their expression of care and compassion may not be their strongest suit, but the love that ultimately holds this dichotomous family together is genuine. That makes Billy’s “return” to them realistic without being sentimental—a well-earned turn toward possible healing.

“Tribes” will stay with viewers beyond curtain call, making them examine their own place in society, the roles they have created for themselves, the kind of communications they share with their loved ones. It asks hard questions that may lead to helpful, though not necessarily easy, answers.

Director Jaime del Mundo once differentiated run-of-the-mill drama from consequential theater, which he said is one that makes a permanent mark on the audience’s psyche. Red Turnip Theater’s “Tribes” belongs in this category.