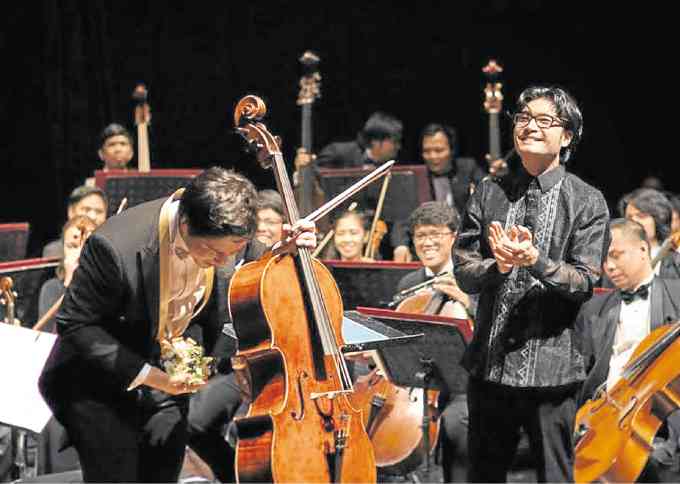 ON A Saturday with nonstop monsoon rain battering Metro Manila and the nearby provinces, the Manila Symphony Orchestra (MSO) under Darrell Ang survived its latest season concert and received a hair-raising standing ovation at the Power Mac Center Spotlight at Circuit Makati last Aug.  13.

The concert was sold out two days before opening night.

Suffering from a cold, the conductor was visibly conserving his energy in the last rehearsal with cellist Isang Enders. But his eyes and ears remained alert as he reminded the orchestra that the crucial horn part is half-a-second late.

In the last rehearsal, German-Korean cellist Isang Enders made something mesmerizing out of the killer Dmitri Shostakovich concerto.

There was no doubt that in the closing 7th Symphony by Beethoven, the stars of the night were conductor Darrell Ang and MSO which rose to the occasion.

“This is the best symphonic concert ever I have seen in Manila,” admitted Filipino tenor Arthur Espiritu.

Ang persevered even after catching the flu on the day of the concert.

Admitted music fan Elizabeth Lolarga: “I am teary eyed just remembering the maestro, the cellist with that ecstatic expression on his face (like the saints when they’re touched by God), the music and how inspired-looking the MSO musicians were.”

The Shostakovich cello concerto was last heard in Manila in 2009 with Alban Gerhardt as soloist of the Philippine Phiharmonic Orchestra (PPO) under Oscar Yatco.

A few days before the MSO concert was the 41st death anniversary of Shostakovich of whom Mstislav Rostropovich once said, “He was the most important man in my life, after my father.”

The next MSO concert is on Sept. 17, at Power Mac Center Spotlight in Circuit Makati with Russian conductor Alexander Vikulov.