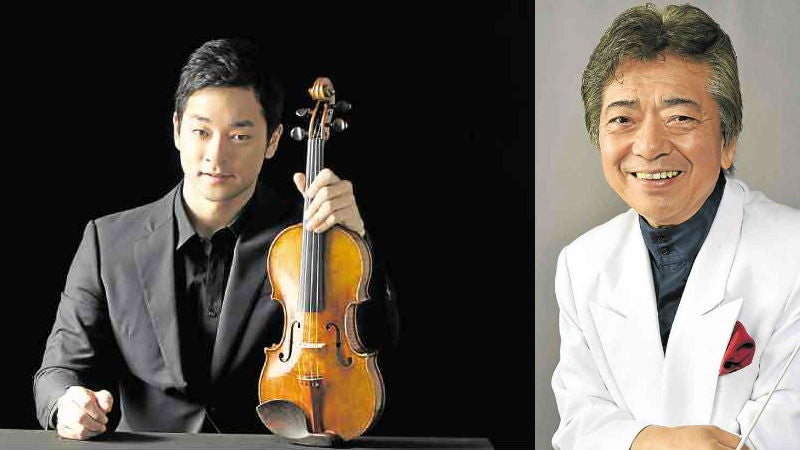 CONDUCTOR Yoshikazu Fukumura will debut as new music director of the Philippine Philharmonic Orchestra (PPO) with his countryman, superstar Japanese violinist Ryu Goto, as guest performer during the 34th concert season openers of the resident orchestra of Cultural Center of the Philippines on Sept. 9.

In a press conference last week at Manila Diamond Hotel, Fukumura said he looked over the repertoire of the orchestra during the last three years. And he concluded that something was not quite right.

From his point of view, these were not the compositions that should normally be played by an orchestra; there seemed to be a lack of coordination with what audiences want.

The conductor said, “What I have observed is that the orchestra should give importance not just to classical music but to the audience as well. So my personal philosophy is that we should begin with the basics and go back to the classics. At the same time I paid close attention to who the soloists would be. We have many soloists for this season; they will bring a lot of happiness to Filipinos.”

Fukumura said, “I would like to try the new music myself but we need to build up an audience for popular-classical music. It is important to go back to classical music which everybody knows. The orchestra should inspire and be inspired by the audience.”

The PPO String Quartet performed during the press con, playing a “serious” chamber piece by Dvorak and then shifting gears with a delightful rendition of that pop song in which the singer asks his beloved if “you’ll still love me when I’m 64.”

Ryu Goto, 28, has established himself as a significant voice in classical music, with a large and growing public in Asia, North America and Europe.

Ryu’s career began at age 7 when he made his debut at the Pacific Music Festival in Sapporo, Japan, playing Paganini’s “Violin Concerto No.1.”

Ryu’s philanthropic work includes working with student musicians throughout the world, mentoring their development, conducting master classes in conjunction with the world’s top institutions. Efforts include the “Ryu Goto Excellence in Music Initiative Scholarship” with the NYC Department of Education, as well as collaborations with institutions like the Juilliard School and the Harvard Bach Society Orchestra. He does extensive musical outreach and cultural exchange in developing countries in Latin America, Southeast Asia and Africa.

Ryu’s features in media are numerous including his own documentary “Ryu Goto’s Odyssey,” a chronicle of his career and personal life from 1996-2006. He is endorsed by airweave and also serves as spokesperson for East Japan Railway Company with regular coverage on TV, radio and in print. In October 2015, he appeared as the host of a weekly television classical music program entitled “Untitled Concert” that was listed in Guinness World Records as “the longest-running TV program for classical music.”

Ryu records for Deutsche Grammophon in collaboration with Universal Classics Japan. In May 2011, he graduated from Harvard University with a BA in Physics and is currently studying the violin with professor Ana Chumachenco. He is a member of US-Japan Council, and has accepted an award from the Japanese American Bar Association as a Japanese-American leader. He holds a third degree black belt from the Japan Karate Association. He performs on the Stradivarius 1722 violin “Jupiter” on loan to him from Nippon Music Foundation.

On Dec, 16, the Christmas concert, Herminigildo Ranera conducts the PPO in a program consisting of Suppe’s “Morning, Noon and Night in Vienna,” Buenaventura’s “Concert for Bassoon and Orchestra” and Tchaikovsky’s “Symphony No. 4.”

Fukumura returns to the podium on Jan. 20, 2017 to usher in the New Year with Mozart’s “Symphony No. 28,” Elgar’s “Enigma Variations” and Mendelssohn’s “Violin Concerto,” with young violinist Diomedes Saraza Jr. as guest soloist.

It’s comeback time for former PPO music director Olivier Ochanine on Feb, 17 as he conducts the orchestra with Tchaikovsky’s “March Slav,” Haydn’s “Symphony No. 88” and Shostakovich’s “Symphony No. 10.”

On March 17, noted cellist Renato Lucas, another PPO alumnus, will be the guest soloist in a program featuring Dvorak’s “Symphony No. 8, Tchaikovsky’s “Variations on a Rococo Theme” and Mendelssohn’s “A Midsummer Night’s Dream Suite.”

And Fukumura closes the 34th season on April 21 with French pianist Monique Duphil as guest soloist in a program that includes Gershwin’s “Girl Crazy-Overture” and “Piano Concerto in F,” Copland’s “El Salon Mexico” and Arturo Marques’ “Danzon No.2” and “El Conga de Fuego.”