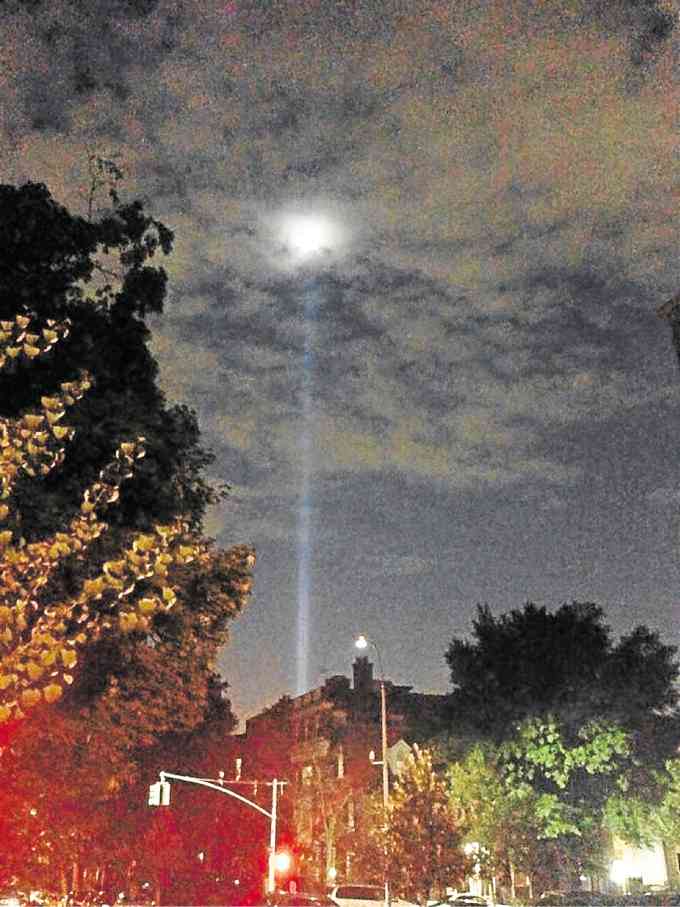 “TRIBUTE in Light” looms high above Park Slope in Brooklyn and throughout New York City. The art installation ismade up of 88 searchlights placed next to the site of what was the Twin Towers. SOPHIA G. ROMERO

NEW YORK—Today, September 11, much of the country and New York especially will commemorate 9/11 as the day when four planes became weapons of destruction against innocent civilians. Two of them crashed into the World Trade Center and brought them down.

The day will be marked, as it has been for the last 15 years, with the tolling of the bell, one for every victim who died. It is also remembered as the day our collective innocence died.

The month of September is when New York city is at its best. As the season slowly transitions to fall, the weather is no longer hot and humid, and the city settles into a comfortable rhythm of existence.

Yes, it is frenzied, it is fast, it is unstoppable but it is also capable of an easy groove where the air is thick with the frisson of change.

For me, that change is always signaled by the color of the sky and, in September, the sky ceases to be a summer sky. It never crossed my mind to think of the sky as anything other than the blue of the sea and sky I grew up with, where the sun never seemed to stop shining and its rays burned brightly throughout the year.

It was the blue of unparalleled joy.

I was unprepared for life in the Western hemisphere where the varying degrees of cold could mean weeks walking around swaddled in a luxurious cashmere wrap or days burrowed under the covers of a down comforter and not moving.

Colder meant less moisture, fewer clouds and a more intense blue as the sun sat lower in the sky and at a different angle.

I learned fairly quickly that within the four seasons, not all blue was created equal. In the fall, the sky unfurls into a vast, expansive canvas where a swathe of blue has been brushed into one swift and wide stroke. It is a blue that is a shade deeper and more pure, its edges sharp and clean. It is the blue of a fall sky filled with hope and promise. I love the fall sky above all.

New Yorkers who were around can tell you a tale of where they were and what they were doing when the impact silenced the city.

It was the first day of school for my children: Amalya in first grade, and Eli in sixth. Dan had just walked into his office 12 blocks north of the World Trade Center. I was in a kickboxing class with friends when the husband of a woman I was with suddenly pulled up in front of the dojo to tell us what was happening.

A woman started screaming because her father-in-law had an office in one of the towers. We urged her to go home and wait for his call.

The rest of us piled into the car and drove to Red Hook, a remote and undeveloped neighborhood in Brooklyn with waterfront views of Lower Manhattan and the Statue of Liberty.

We ran to the edge of an empty parking lot and pressed our faces against a wire fence a few steps away from the Hudson River.

We watched in silence as the WTC burned, our minds and hearts unable to make sense of what our eyes were telling us.

We didn’t know that this was a deliberate, planned and organized murder. Terrorism had not entered our daily vocabulary. Bin Laden who?

We saw the towers holding on, straight and erect in their final moments, surrounded by thick plumes of black smoke as they were slowly consumed by burning fuel.

Truly gone
For years since 1973 when the Towers first opened, the Manhattan skyline was defined and anchored by those two symbols of modern capitalism at their best. Then they were gone. Just like that.

Five minutes after we arrived, they folded and collapsed into each other, like a lighted cigarette that runs out of oxygen and eventually dies.

The horizon was now a single line of dark ash. There was hardly a sound as they fell to the ground: a poof followed by the longest silence ever.

My friend Emil, who was working in the ER that day, describes getting ready and waiting for ambulances to arrive filled with people in need of help. The ambulances did arrive but they were empty.

To this day and whenever I drive across the Brooklyn Bridge toward Lower Manhattan, I think I can still hear that poof all over again. I think I smell something burning. I look to my left and find that the towers are truly gone.

My children are now 26 and 21. Alysson never got the call from her father-in-law and not a single trace or piece of him was ever found. Marian, whose firefighter husband Dave belonged to the elite Squad 1 (first one in, last one out), will quietly commemorate the day by keeping to herself and not answer her phone. Dave had ended his shift and, as agreed upon, was supposed to meet her for breakfast and spend the rest of the day celebrating their wedding anniversary. He was crushed when the first tower went down.

Kelly has found love for the second time and has remarried. Yet every year she never fails to pay tribute to Scott, her husband and the father of their two now-grown children. He was in the wrong place at the wrong time.

Lisanne, who lost her fiancé, recently opened a cool bar near me. She is raising their son who was born five months after 9/11 along with the golden Labrador they shared.

Red Hook is now an upscale enclave with fancy restaurants, a Fairway supermarket, an event space, and a dock for major cruise ships. The spot where my friends and I stood on that morning is gone, most likely replaced by a brownstone selling for $1.5 million.

I’ve only been to Ground Zero three times. The first was for the opening of Century 21, a department store. The second was to take a guest who was visiting New York for the first time. The third was a function of getting to the Conde Nast building and taking a shortcut.

That’s three visits too many. I couldn’t wait to get out; I didn’t like being there.

On those visits it is what was missing rather than what was there that felt like a sucker punch to the stomach and took my breath away.

Fifteen years later, I am not able to shake off the shock and bewilderment that comes with the realization that the towers are indeed gone.

Where the sky once felt so wide and open, it is now filled with many new buildings (and still more to come), each one taller than the last, each building piercing the sky if not the heart and every memory that it touches.

The sky seems so much smaller than it used to be, as if making sure that it will never be at risk again. Even the light stays away.

Lower Manhattan is unrecognizable. Where the WTC used to be is One World Trade Center, a single column of steel, glass and concrete that shimmers in the distance and is topped by the Freedom Tower Observatory.

More recently, on Aug. 16, the World Trade Center Transportation Hub, formerly the PATH train station, opened to the public. Inside is the Oculus, a much-disputed architectural behemoth designed by Santiago Calatravo to look like dove wings but resembles the carcass of a turkey the day after Thanksgiving.

The Reflecting Absence Memorial is a pair of granite craters where manmade waterfalls pour into two reflecting sunken pools, actual footprints of where the Twin Towers once stood. The names of the estimated 3,000 victims who died on 9/11 are carved into the lips of the pools.

The eight-acre park is a destination for people who want to pay their respects and show their empathy and compassion for a city that suffered a great loss. Yet I wonder if visitors understand and are prepared for what they will find when they get there.

For all the architectural sights and landscaping that surround it, Ground Zero is a cemetery filled with the remains of the dead, some of whom have not been found and perhaps they never will.

When you visit, particularly if you go to one of the reflecting pools, you might find yourself standing next to someone holding a piece of paper over a name and making a rubbing of it. Chances are that name belongs to someone they loved and lost. Leave them alone. Resist taking a selfie. Turn off your cell phone. Put yourself in their shoes and walk with them in their silence.

I regret that I never took Eli and Amalya to see the Twin Towers. I never thought we would run out of time. I had been there once just after college and remember going to the very top floor and leaning against the glass window that held me back from the ground below. I looked down and immediately felt dizzy and nauseous. I wasn’t sure I would make it down the elevator without throwing up.

After 9/11, we heard stories of people jumping out of the burning towers knowing they would die. My friend Andrew was able to run out of the building just as those bodies hit the concrete pavement. I’ve been told that one loses consciousness the closer one gets to the ground, as if knowing that brings relief to their deaths. I got to step away from the glass window when I became physically uncomfortable. The people who jumped never had a choice.

I find it difficult to look at the sky. It is hard to imagine that something so beautiful can also bring so much darkness. But I cannot resist the blue of a fall sky. I look anyway knowing that it is a beauty that comes with a price: It is a beauty that makes me sad.

The author has a published novel, “Always Hiding.”