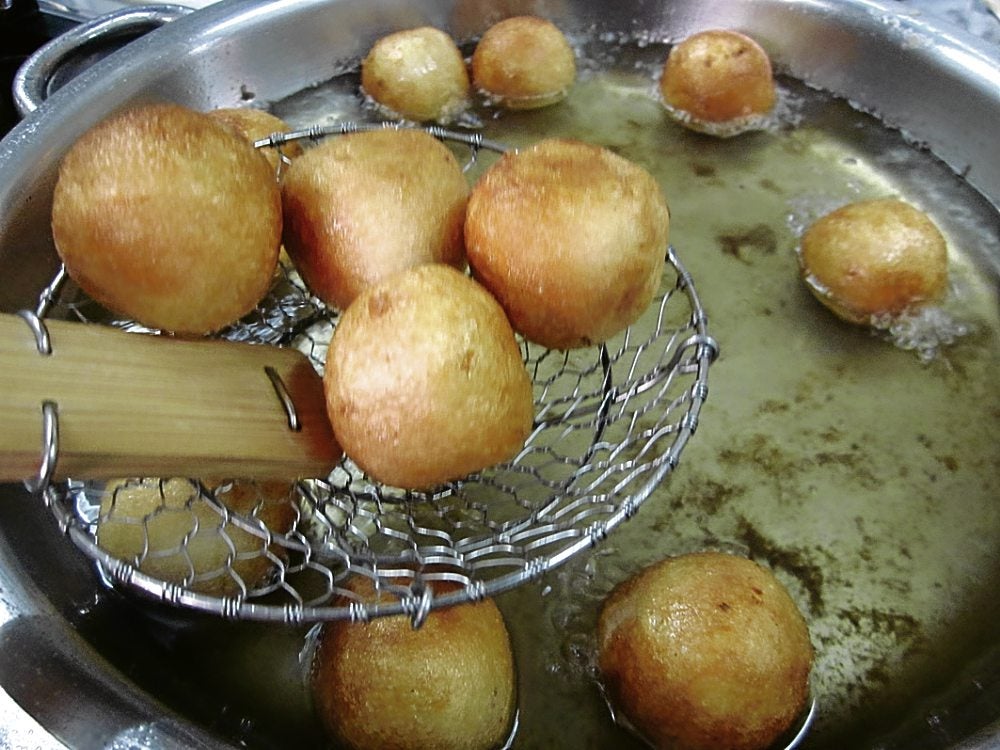 How hard can it be to cook store-bought frozen fish balls? It’s just convenience food, a practical solution to speeding up your meal preparation, which is why it’s called convenience food in the first place.

Yet there’s more to it than that, I learned, when I recently tried to fry some fish balls. Like the Biblical story about the multiplication of the loaves and fishes, there are lessons to be learned from this seemingly mundane task.

First, the practical. If you’ve ever tried frying frozen fish balls, you know how tricky it can be. Sometimes as soon as you put the fish balls into the hot oil, the oil begins to splatter, triggering an uncontrollable spraying of searing hot oil all over your stove—and sometimes all over you. This makes the task not only messy, but, if you’ve ever been hit by a drop of hot oil, also very painful.

There’s a simple trick to keep this from happening, however, which the package instructions don’t tell you. First, pat the fish balls dry with some paper towels. Then sprinkle some flour on the fish balls before frying them. The flour will absorb the moisture in the fish balls, keeping the surfaces dry so that the oil doesn’t react with the water and splatter. In addition, the flour keeps the fish balls from sticking to the pan, a major requirement if you want to have perfectly cooked, golden-brown fish balls.

Which brings us to the next challenge in frying fish balls: getting them to an even, golden brown color. Here’s where lessons in virtues kick in. Like the saints, you must learn to resist temptation, in this case the temptation to turn up the heat so as to hurry up the process of browning the fish balls. Turning up the heat can only result in fish balls that are undercooked and cold inside, while being too brown outside. Surely that’s not the kind of food you’d like to serve and eat.

To avoid this, before cooking, heat the oil at a high temperature. When the oil has been sufficiently heated, put in the floured fish balls then immediately turn down the heat to low.  Cook the fish balls on low heat for the first two to three minutes, so that the heat will have time to reach the center and inner parts of the fish balls. Then turn up the heat slightly (not too much) to brown the exterior. All the while, you must keep the fish balls moving in the pan of hot oil by stirring them around the pan with a food turner (sandok) or heat-proof spatula so that they cook and brown evenly. This will also keep the fish balls from sticking on the pan. And it will give you something to do other than fretting, staring at the fish balls, or fidgeting and wondering whether they’re cooked yet.

Note that this will require enough patience to make you a candidate for sainthood. Because you’re using only low heat in the beginning, it will take time for the fish balls to cook, and time means waiting, which in turn means Patience with a capital P.

Then you must also have faith—faith that if you do everything right, it will all turn out well in the end. This may be difficult, especially if you’re a first-time cook. At some point, you may be riddled with doubts, about your ability, about the results, and about cooking in general. You may even want to abandon the project altogether.  But if you persist, if you don’t give up, your faith will be rewarded. Not only will you gain confidence in your skill as a cook, you will also have a nice platter of fish balls to enjoy.

Fish balls can also be a lesson in appreciation. Just imagine: Once upon a time, that fish had a head, fins, tails and scales.  Now it has been transformed into edible balls of food, unrecognizable from its former shape.  Someone must have done all the hard work of gutting, scaling and processing the fish (not to mention catching the fish in the first place), thereby sparing consumers like you and me from having to deal with all the mess.

That, at the very least, should make you feel lucky as well as grateful that someone else had thought of going into the business of processing fish into the convenience food you are now about to enjoy.

And finally, as unlikely as it may seem, cooking fish balls teaches you courage. Not just the courage to work with a pan of hot oil, but also the courage to go against fads and pretentiousness. In these days of chef worship and adulation for the hip and trendy, cooking fish balls may seem like the ultimate cop-out, as if you’re content with serving something so humble, something so… outmoded.     You can almost hear the food snobs saying “tsk, tsk tsk” while shaking their heads in disgust.

But don’t let them, or anyone else, intimidate you. If you want to cook fish balls, and if you like its taste, then by all means, cook, eat and serve fish balls and don’t worry about what anyone else may say. It’s about being your own person and standing for what you believe in. And if anyone still insists on dissing them, you can just tell that person these are actually quenelles de poisson, to make the dish sound classier. And you won’t be lying either. Quenelles de poisson is actually the closest thing to fish balls the French may have.

So the next time you decide to cook fish balls, remember it’s more than just about cooking.  It’s about gaining skills and growing in virtue. It’s about building character and sticking to your beliefs. It’s about faith.  It’s about life.

Heat cooking oil in a wok or frying pan to high, 1-2 minutes. To test if oil is hot enough, drop a cube of bread into the oil. If it sizzles, the oil is ready for frying. Drop the fish balls into the hot oil in batches (don’t overcrowd the pan) then immediately turn down the heat to low. Cook the fish balls while stirring them around the pan constantly with a food turner (sandok) or heat-proof spatula.  Cook until fish balls are evenly golden brown then remove them from the pan (see photo) and transfer to a strainer lined with paper towels so the excess oil gets absorbed. Repeat with the remaining fish balls. Serve with desired sauce (sweet-sour sauce, ketchup, etc.)