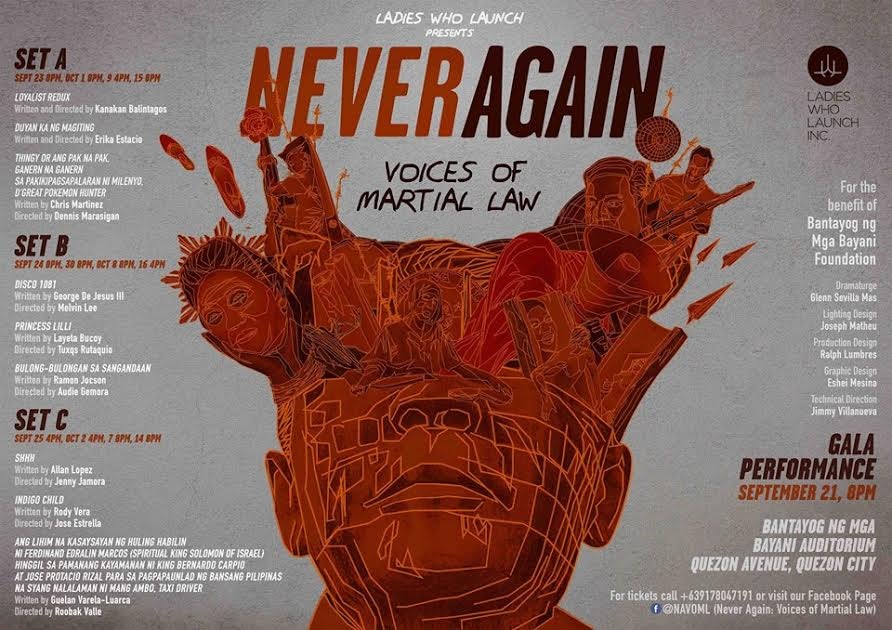 Just in time, a festival of plays about martial law

Author and activist Alice Walker once observed that “poetry is the lifeblood of rebellion, revolution and the raising of consciousness.”

That fervor animates theater actress Dolly de Leon and four other like-minded women activists—Zena Bernardo, Jozy Acosta-Nisperos, Jasmine Ong and Judith Albano—in their efforts to memorialize the horrors of martial law through theater in “Never Again: Voices of Martial Law,” a festival of nine one-act plays to be staged at Bantayog ng Mga Bayani Auditorium from Sept. 23 to Oct. 16.

De Leon believes a live theatrical experience can be a powerful tool in educating or reminding the audience about the atrocities of the Marcos dictatorship, and why we shouldn’t allow historical revisionism.

There are six original plays exclusively written for this festival, and three that are being re-staged.

“Loyalist Redux” was part of this year’s Virgin Labfest, while “Duyan Ka Ng Magiting” had an initial run in February this year at Edsa People Power Experiential Museum. “Bulong-Bulongan” has had several runs since the 1990s. 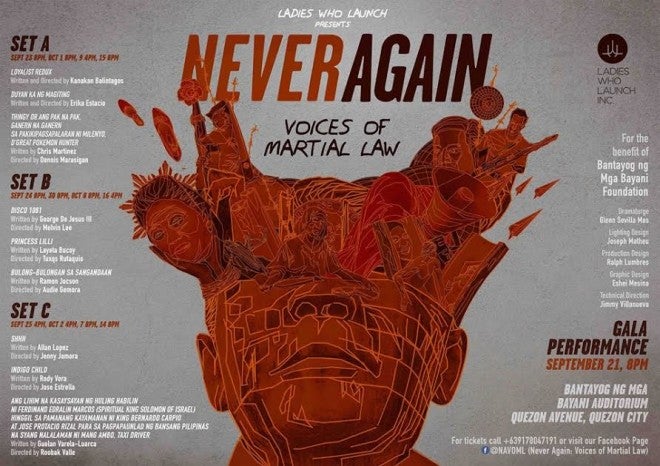 “It all started with the possibility of Marcos’ burial at Libingan ng mg Bayani,” says De Leon. “I created the change.org petition against the burial addressed to President Duterte, the day he announced that he would push through with it. When the petition was mentioned in a news article, I saw Zena Bernardo’s name in the same article. She is the creator of the Facebook page ‘Never Again to Marcos Family and Their Cronies.’”

De Leon met up with Bernardo during the Independence Day picnic at Bantayog, which was organized by Bernardo and three other ladies: Jozy Acosta-Nisperos, the creator of The Silent Majority blog; Jasmine Ong, a corporate marketing practitioner; and Judith Albano, an advertising practitioner.

Together they formed the group Ladies Who Launch, which is producing “Never Again.”

The initial plan was to raise funds for the upkeep of Bantayog ng Mga Bayani, a historic landmark in Quezon City a stone’s throw away from the corner of Edsa-Quezon Avenue MRT station and mostly known to call center agents as a small public park behind Eton Centris Business Center.

For “Never Again,” Bernardo initially thought of staging monologues with martial law as the main theme. “From then the production evolved to what it is today: a collection of one-act plays,” says De Leon.

De Leon, a UP theater arts graduate, chose nine names that she considers the “best playwrights in the industry today” along with directors “whom I’ve worked with in the past and whose work I have admired over the years.”

Rody Vera’s “Indigo Child” explores the life of Felisa (played by Skyzx Labstilla), a New People’s Army amazon caught by the military in the last few years of the 1970s.

“She is tortured, raped and becomes a ‘lover’ to a military man before she manages to escape,” says Vera. “Years later, she confronts her past with her grown-up child Jerome, who wants to know the truth.”

A project like “Never Again” is important, he believes, to make sure people don’t forget—or history will just repeat itself.

Martinez, a master of satire, writes the story of “a millennial who tweeted about that ‘martial law thingy.’”

“It is about the apathy of the people, specifically the young and the middle class,” he says. “It’s a satire not just of martial law, but also about what’s happening around us now. This tula-dula
also serves as a warning about our complacency, shallowness and forgetfulness as a nation.”

De Jesus’ “Disco 1081” brings the audience to a dance club in the late 1970s. “It’s about four young activists facing choices during the twilight of martial law: whether to continue to be part of the student movement, or to ignore the reality that the oppression brought by the dictatorship affects them through the disco music that can make one forget.”

Because “Bulong-Bulongan” was written in the late 1980s, the play is set in 2000. It is about three construction workers from the 1981 Film Center mishap who are still loitering and waiting for their back pay.

Director Audie Gemora says, “It is not only about the poignant stories and aspirations of these men, but a metaphor for Filipinos resigned to and therefore trapped in the quagmire of oppression.”

“Sshhh,” meanwhile, is about a young couple about to go out for lunch with the girl’s father, a high-ranking military official in the Marcos government.

For playwright Allan Lopez, martial law has been forgotten and often misinterpreted not so much because of the perpetrators themselves, “kundi dahil na rin sa atin. Too much celebration over the celebrities and events of 1986, too little introspection on how the decade before that changed us as human beings,” he says.

Dramaturg Glenn Sevilla Mass sees “Never Again” as an opportunity for theater artists to get together and perform for a very significant cause.

Says Mas: “The plays that we put together are varied: there’s one on the deaths of four of the most prominent victims of martial law; there are a couple of contemporary comedies on life in these very trying times; there’s a tragedy on the workers whose hopes and dreams perished with them when a scaffolding of the Manila Film Center collapsed, sending them to their deaths. I never thought we’d revisit these dark times in our history again but the times demand that we do. So we’re doing it.”