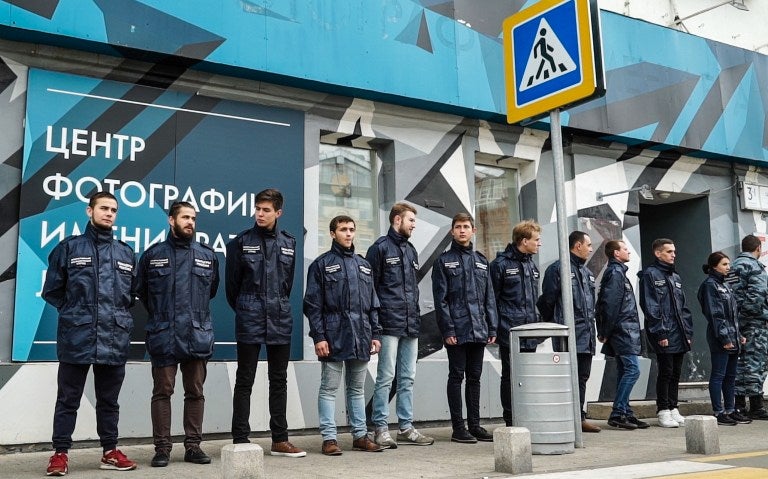 Some 20 activists in matching uniform jackets and camouflage from a little-known non-governmental organisation called "Officers of Russia" stand outside the doors of the Lumiere Brothers Gallery close to the Kremlin in Moscow on September 25, 2016. Pro-Kremlin activists threw urine on pictures by a controversial US photographer at a Moscow gallery and forced the show's closure after a government advisor condemned the images as "child pornography". The exhibition showed pictures by Jock Sturges, a well-known photographer whose nude images of children have regularly prompted accusations of paedophilia, which he denies. / AFP PHOTO / Andrei BORODULIN

MOSCOW, Russia — Pro-Kremlin activists who threw urine at pictures by US photographer Jock Sturges — best known for nude images of adolescents and their families — on Sunday forced its closure, a day after a government advisor condemned the images as “child pornography”.

Moscow gallery curator Natalia Litvinskaya told journalists the show had “nothing to do with pedophilia” but that she took the decision to close after receiving “threats from absolutely delusional people”.

The closure of the exhibition — “Jock Sturges: Absence of Shame” — came after influential conservative senator Yelena Mizulina on Saturday released a statement on her website calling it “a public demonstration of child pornography materials” and said it “must be closed urgently”.

Russia’s children’s ombudswoman Anna Kuznetsova then weighed in, condemning it on Facebook a few hours later as “child pornography”.

The exhibition, which opened on September 7 at the established Lumiere Brothers Gallery close to the Kremlin, is the first to show the California-based Sturges’ work in Russia.

Around 20 activists in matching uniform jackets and camouflage from a little-known group called the “Officers of Russia” on Sunday positioned themselves outside the doors of the gallery, as police watched, an AFP video journalist witnessed.

The Officers of Russia describes itself as a patriotic association of former and serving military and “concerned citizens” with more than 100,000 members.

One activist standing outside the gallery, 20-year-old Timofei Bendas, told journalists he had seen some photos from the show which he called “dirty, vile and disgusting”.

The organization’s leader Anton Tsvetkov, who also heads the security committee of Russia’s Public Chamber, an advisory body made up of public figures, then viewed the exhibition with its organizers, before coming out and announcing its closure.

“The organizers accommodated the Public Chamber and the exhibition is closed from today,” he shouted from the gallery doorway to shouts of “shame!” from supporters of the show. He acknowledged however that the show included only “semi-naked” pictures of children.

‘Culture should be Russian’

Journalists were then allowed into the gallery where owner Eduard Litvinsky told them: “We took a joint decision to close the exhibition.

“There was a public reaction and we can’t do anything about this,” he said.

After he spoke, a man in a leather jacket who gave his name as Alexander poured a plastic bottle filled with urine onto some of the photographs as journalists watched.

He shouted: “This should be the position of every Russian. Our culture should be Russian. We don’t need European culture here.”

He was then handed over to police, RIA Novosti state news agency reported, although a police spokesman told AFP he could not immediately confirm the man’s detention.

The summary closure of the exhibition under pressure from conservative activists and without any legal procedures sparked wide debate online, with hashtags related to the exhibition trending on Twitter.

“A non-governmental organization supported by private security guards sets the rules in Moscow with complete lack of police intervention,” radio presenter Alexander Plyushchev wrote on Twitter from the scene. “Hello, don’t we have authorities in our country?”

It is the second recent attack on a contemporary art exhibition in Moscow by conservative activists.

In August last year, Orthodox activists from a group called God’s Will damaged sculptures at an exhibition of non-conformist Soviet artists in the Manege arts center, describing them as blasphemous. One activist is awaiting trial for damaging cultural objects and faces up to three years in prison.

Condemnation of artists by officials lacking any specialist knowledge is reminiscent of the Soviet era, when Communist party chief Nikita Khrushchev visited a 1962 exhibition of abstract painting and called the artists “fags” and “bastards.”