‘Harry Potter and the Cursed Child’: Yes, it’s a play, not a novel | Lifestyle.INQ ❮ ❯ 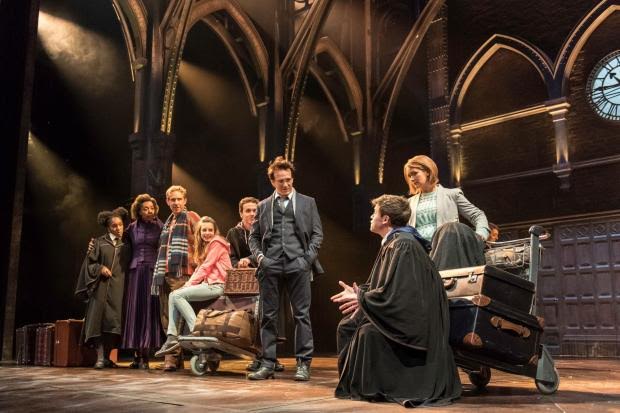 “Harry Potter and the Cursed Child” at the Palace Theatre, London, earned a five-star review from The Independent’s Jack Shepherd: “J.K. Rowling, Jack Thorne and John Tiffany have created a theater production of immense wonder.” PHOTO BY MANUEL HARLAN

‘Harry Potter and the Cursed Child’: Yes, it’s a play, not a novel

What first felt like a Confundus spell cast on some Harry Potter fans seemed to turn into a Crucio spell instead.

July 31 was the biggest day on the Potterhead calendar for 2016 as it was the date the newest Potter book, “Harry Potter and the Cursed Child” was to appear on book shelves around the world.

Only problem? It wasn’t the book many fans were expecting. Despite the book’s subtitle—“Parts One and Two: Special Rehearsal Edition Script”—many buyers were shocked the book was not a novel, but instead a script. While this seemed to be something the buyers had overlooked, the outrage was pretty palpable.

“I feel bad for people that read ‘Harry Potter and the Cursed Child’ since it’s not a novel and more like a script,” a reader with the Twitter handle Sam Darwish tweeted. “It should’ve been a novel.”

All Potterheads wanted an eighth Harry Potter novel (it’s been nine years since the seventh novel, “Harry Potter and the Deathly Hallows,” was published in 2007). But, in fact, author J.K. Rowling had previously said that “Hallows” was the last Potter book.

In 2012, plans were hatched to do one more full-length Harry Potter work—but, this time, for the stage. Rowling was clear she wasn’t going to do another novel, so this project, which would later be named “Harry Potter and the Cursed Child,” presumably provided her a different medium to participate in another Potter creative venture.

“The Cursed Child” isn’t by Rowling alone. The plot itself, the “original new story” that runs through “The Cursed Child,” was created by Rowling, the veteran stage director John Tiffany and the dramatist Jack Thorne.

But the script is by Thorne alone. It’s his words buyers were actually reading in the book, not Rowling’s. As a result, some annoyed readers kept comparing how flat or unadorned Thorne’s lines were compared to Rowling’s.

But the thing is, “The Cursed Child” is a play, and unless it was going to feature long, dense voice-overs, the dialogue was pretty much going to stand alone.

There were other points of discussion aside from the format. The casting of the black actress Noma Dumezweni as Hermione (the role previous played in the films by Emma Watson) in the production of “The Cursed Child” that opened in London drew unfortunate fire, which Rowling elegantly and definitively rejected with a tweet: “Canon: brown eyes, frizzy hair and very clever. White skin was never specified. Rowling loves black Hermione.”

While a good number of readers clearly enjoyed the scriptbook (the year’s biggest best seller), many others were left cold by this portrayal of the future of Harry Potter. The criticisms were similar to those leveled against the controversial epilogue of the second “Deathly Hallows” movie.

Some die-hard Potterheads described “The Cursed Child” as “bad fan fiction.” The future depicted by the book, 19 years after the events of the Battle of Hogwarts, is a sobering, grown-up one, with Harry and friends dealing with everything from parenthood to daily adult life.

Readers can choose which parts of the Harry Potter saga they would want to read, but this is how Rowling chose to end it—it’s canon—and, like it or not, this really is how it ends. 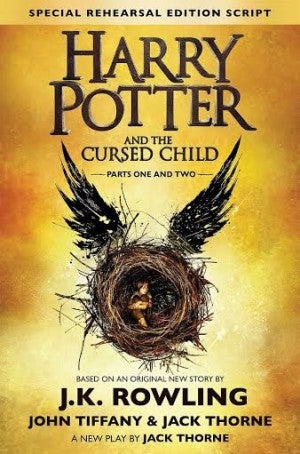 That brings us to the format of the book. Scriptbooks and books of plays have always been available, but they follow a decidedly different format. Unlike a novel that provides an all-encompassing narrative text, scriptbooks instead provide only the actors’ lines and general stage directions. They don’t spell everything out.

This is because a stage play is a collaborative work that goes beyond the script or the direction; it involves the costume designer, the production designer, the music director and so on. On the page, scriptbooks such as “The Cursed Child” would indeed seem on the spare side when it comes to the description.

There is an advantage to that, which is that readers can fill in the gaps using their imagination—though, apparently, that is not an option everyone wants. Scriptbooks being what they are, the only other way to experience “The Cursed Child” is to watch the actual play in person.

Good luck with that. “The Cursed Child,” a two-part play with four acts lasting five hours, debuted at the Palace Theatre on Shaftesbury Avenue in London’s West End on July 30 to rapturous reviews and sold-out shows.

The Independent’s Jack Shepherd gave the play a five-star review: “Well, Harry Potter fans, you will be glad to know that J.K. Rowling, Jack Thorne and John Tiffany have created a theater production of immense wonder.”

The overwhelmingly positive reviews—and perhaps the continuing presence of Pottermania—led to all the 2016 shows being sold out. The production scheduled new shows up to December 2017, only to have these tickets sell out in days as well.

One can only imagine that tickets for the rumored Broadway version would be similarly elusive once that production is confirmed.

“Harry Potter and the Cursed Child” thus promises to enjoy a long, profitable life as a theatrical production, soon to be seen around the world. But it also reveals that all the wizarding world is a stage, and Harry Potter, the Boy Who Lived, lives again and may continue to do so in front of the footlights.