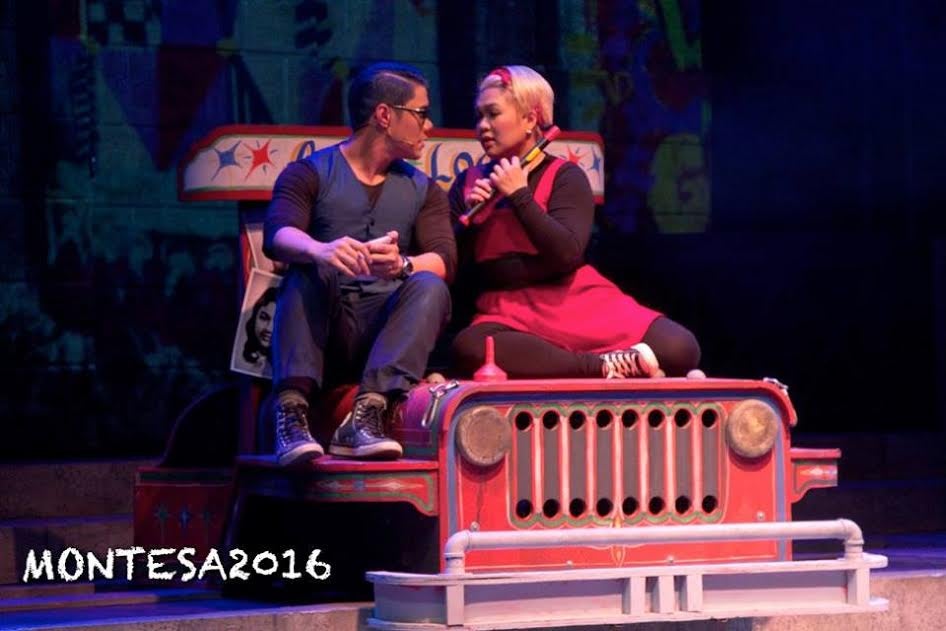 Via Antonio as Josephine and Joaquin Valdes as Chinito in “Ako Si Josephine,” written by Liza Magtoto, directed by Maribel Legarda and with musical direction by Myke Salomon, featuring the music of Yeng Constantino. PHOTO BY RAUL MONTESA

This brand-new jukebox musical uses Constantino’s songs, but it feels like a whole other creature—something nocturnal. It’s the synthetic, rhythmic thumping of club music that musical director Myke Salomon has infused into the score, and the result must be how desire sounds amped-up.

This musical reimagination snugly fits its dystopic setting. “Ako Si Josephine” is set in an empire where the only kind of music allowed is the hypnotic beat of the dance floor, the better to keep the citizenry’s emotions bottled up.

This doesn’t sit well with our heroine, the eponymous Josephine, who works for the despotic Monotomia manufacturing those tedious tunes. As her story unfolds, leading up to an inevitable revolution, Salomon unfurls his own range of tricks.

A slower mix of “Chinito” illustrates Josephine’s initially unrequited affections for her boss Chinito. When the two of them become a couple and Chinito shares memories of his parents, it is to the tune of “Pag-ibig” as disco. Then he reveals their names—Kundiman and Harana—and the music morphs: “Pag-ibig” is now sung quasi-operatically as a kundiman.

Later, Josephine stages her revolution by awakening the people’s deadened senses through an instrumental mash-up of “Ikaw” and “Hawak-Kamay,” made using the Composer application of the early Nokia phones (harking back to a time when “app” still wasn’t part of daily vocabulary).

It’s the sheer audacity of the genre-spanning music-making that convinces you this is Salomon’s most accomplished work to date. In its most thrilling—and original—moments, you can’t help thinking, “Who, in theater today, does that?” Plus, it makes full use of his skills as a DJ.

“Josephine’s” evocation of a world designed to look like a graphic novel is just as bold. (It must be said: An ample budget goes a long way.)

Boni Juan’s set is dominated by an imposing wall, suggestive of a club façade, topped by a row of megaphones. But the highlight is obviously the jeepney that descends from the ceiling and ascends back numerous times, echoing the helicopter of “Miss Saigon.”

Gio Gahol’s choreography always feels essential to every scene, and Carlo Pagunaling’s costumes—those blues and pinks and reds—are hip without being distracting.

The graphic-novel conceit, paired with many of the songs, at times makes “Josephine” teeter on the edge of extreme cuteness (so cute, you can almost pinch it). But director Maribel Legarda manages to keep this production lean where leanness is needed, without denying it its moments of rambunctious excess.

The two Josephines are a study of contrasts: Maronne Cruz is this show’s cutesy spirit personified, but Via Antonio fearlessly breaks out of that mold and delivers a performance that really makes the show worth its title.

It is Ricci Chan, however, as Monotomia (alternating with Jon Santos), who lands the loudest laughs and cheers. His biggest moment comes in “Paano Bang Magmahal”—rendered as gospel, complete with backup choir—which requires Monotomia to adlib, and Chan, for lack of a better description, brings the house down by sheer force of taray.

If there’s any beef to be had with “Josephine,” it’s with Liza Magtoto’s writing. There are occasional sudden, glaring changes in tone, and the second act dawdles. The last quarter is gratuitously complicated, entangling the rest of the story with it.

But Magtoto’s dystopia also includes “Pokémon Go,” and abductors who leave their victims on the sidewalk with placards that say: “Compusher. Huwag tularan.”

More: A despotic regime, where those who speak up and fight back are either exiled or have their lives threatened. And the revolution takes the form of music: Pure art as liberation, if not salvation.

For a cute jukebox musical, “Josephine” sure speaks a ton of truth about the state of our country, its message hitting right at home. Yeng Constantino as revolutionary symbol, anyone?