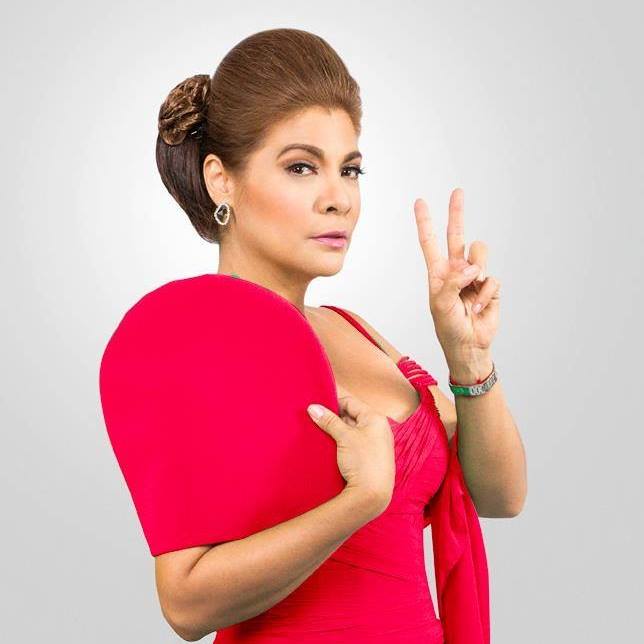 Pinky Amador: It’s the duty of the artist to seek out the truth and express that in his or her art. Theater is an incredibly powerful tool. If used properly, it could be a proponent for change.” PHOTO FROM 'NEVER AGAIN: VOICES OF MARTIAL LAW'

The twist in the story is that her role, simply called ’Ma, is a Marcos apologist and a fan of Imelda Marcos, while Anak is an artist-activist studying at University of the Philippines  Diliman. “Loyalista” had its first run in this year’s “Virgin Labfest” with Irma Adlawan and Abner Delima Jr. in the cast.

“Loyalista” marks the first local political satire for Amador, a seasoned actress  of the stage, television and film for 33 years now. And it comes with the thought that she had first-hand experience of martial law.

Amador recalls being detained overnight for joining the noise barrage on the eve of the Batasang Pambansa elections on April 6, 1978.

“My brothers and I joined the group of Tito Doy and Celia Laurel and family, and Eva Estrada Kalaw, for a ‘noise barrage’ that assembled in Shaw Boulevard. Our convoy proceeded to San Juan. We were allowed to ‘pass through’ by [then] Mayor Joseph Estrada, but by the time we got to Manila we were rounded up and brought to the Western Police District Office.

“At the police station, it was like a peace rally. People were singing in protest, others were sending water and food, the
international journalists from Time and AP came, and once the cameras were rolling, Tito Doy  tore up his cedula in defiance.

“We were released [in the wee hours] and our names appeared on the front page of the newspapers, along with those who were detained. Tita Bibot [Amador] was furious because, on the same front page, Imee Marcos was appearing in ‘Member of the Wedding’ which she was directing for Repertory Philippines. So you had one Amador promoting a play with Imee, and three [younger] Amadors listed as part of those at the Western Police District!”

Many may know Amador as the actress-niece of Rep founder Zeneida “Bibot” Amador, but, in fact, she grew up in a family of legal eagles. A grandfather and her father were judges. Her mother and a cousin were lawyers.

“You can imagine how much the ideals of justice were ingrained in us,” she says. “I remember during the ‘referendum’ years, when most people had to vote ‘Yes,’ my parents followed their gut feel. I always admired my parents for their courage to vote for what they thought was for the benefit of the country. I think they were also proud that their only girl and youngest child had that same fire in her belly.”

She also remembers that early morning when she went to attend the burial of martyred Sen.  Ninoy Aquino with uncles Tony Amador and Ricky Avanceña.

“When I approached my parents to make paalam, they just told me to be cautious and to remain vigilant, but I could see through a glint in their eyes that they were proud,” she recalls.

The wonder of it all was that Repertory Philippines, which was like her second home, had actors “from families of every political leaning.”

“Marcos, Enrile, Laurel, Virata—and yet we all somehow managed to co-exist despite those differences. I guess art and theater brought us all together.”

But there were also days of disquiet. During the rehearsals for “Agnes of God” in 1983 (for which she won an Aliw Award for Best Actress), she remembers not knowing if they would push through because the director, Behn Cervantes, could be “invited” by the military police any time. “He was often in and out of detention,” says Amador.

When Rep was still housed at the Insular Life Building on Ayala Avenue, during the yellow “confetti rallies” before the fall of the Marcos dictatorship, she remembers her colleagues tearing the Yellow Pages (how the phone directory was called then) to scatter on the crowds below.

“Then one day, a colleague got tired of tearing the pages, and decided to throw half of the book out the window, and I screamed, ‘Don’t do that! You might hit my Lola!’ That’s because my grand-aunt, Nini Avanceña, was always at the forefront of the rallies,” she says.

But all these don’t mean that playing ’Ma for “Loyalista” is just being her real self. She took on the part, she says, because the play, and the “Never Again” festival, have something important to say.

“This is just the tip of the iceberg. It’s the duty of the artist to seek out the truth and express that in his or her art. Theater is an incredibly powerful tool. If used properly, it could be a proponent for change.”

And, while anything is possible, “I have great faith that Filipinos will never again let martial law happen.”