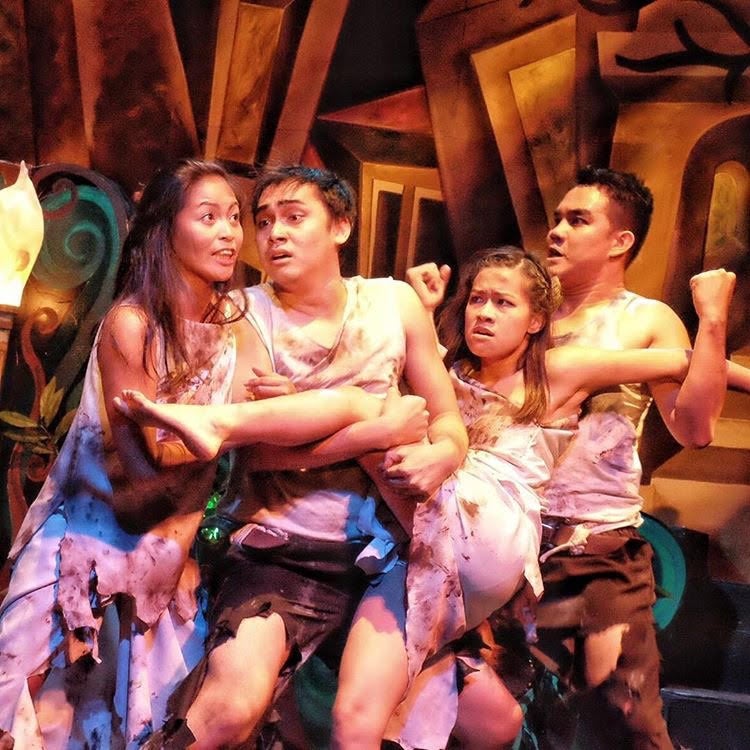 Magic and mayhem in ‘Midsummer’

“A Midsummer Night’s Dream” is said to be one of William Shakespeare’s most whimsical comedies. It’s light and witty, using magic and other flights of fancy to show both the fun and folly in romance. In short, just relax and enjoy the ride.

That’s how Tanghalang Pilipino invites its audience to “Pangarap sa Isang Gabi ng Gitnang Tag-araw,” which is “Midsummer” by way of Rolando Tinio’s translation. The action is fast and furious,  but never leaves the audience wandering in creative limbo. The small-scale Tanghalang Batute narrows the gap between the onstage players and their predominantly young viewers.

Shakespeare’s  particular topic is something they could—and would want—to relate to: the merry-go-round of love that makes those caught in its enchantment quite insane.

Maybe that’s why director Carlos Siguion-Reyna’s attempt to add a bit of darkness doesn’t really work. Teseo’s (Teroy de Guzman) rape of the amazon queen Hipolita (Jackie Lou Blanco) reveals the grim back story to their betrothal, with which Shakespeare starts his play. But the resulting streak of bitterness, no matter how slight, seems out of place in the subsequent romp.

Another heavy-handed touch is the bilingual approach to Tinio’s translation, with dramaturgy by Rody Vera. To underline a class struggle, the nobles speak English and the common people wax poetry in Filipino.

It is to the cast’s credit that they make this particular linguistic divide sound natural. The senior performers who play the Greek aristocrats (De Guzman, Richard Cunanan) infuse their lines with the necessary gravitas sans pomposity, and yet can easily pull back to deliver the required comic punch. Audie Gemora and Liesl Batucan, meanwhile, stick to Filipino as the fairy rulers Oberon and Titania.

Batute’s single platform, enlivened by green-and-yellow visuals that represent their enchanted forest, does not seem to exude mystery or allure—lacking a more visible distinction between man’s world and theirs, especially when the young Greek lovers enter their domain. But what the stage lacks, Gemora, Batucan and their entourage of mystical creatures make up for with verve and charm.

There is none of the repressed anger in the Teseo-Hippolyta coupling in their interaction. Even when Oberon and Titania duke it out as they vie for ownership of an Indian child, a sly, sweet fondness underlies their contest. Unapologetic mischief is part of their culture of magic. This helps explain why Titania readily forgives Oberon for making her fall in love with, of all things, a half-human half-donkey.

The seniors’ theatrical adeptness can overshadow the younger thespians. Aldo Vencilao’s Puck prances and pouts, but never really gets out of Oberon’s huge shadow. His contemporaries do shine on their own, out there in the forest, when Lysandro (Marco Viaña), Hermia (Antonette Go), Demetrio (JV Ibesate) and Helena (Lhorvie Nuevo) are cut loose from the umbilical cord of their mentors.

When these actors are onstage, there is no mistaking their connection with the college crowd. Shakespeare’s original text and Tinio’s translation are complex enough, but the young audience gets the point, thanks especially to scene-stealers Jonathan Tadoan as the blustery, lustful Bottom, and Nuevo as the homey Helena who finally gets the upper hand over the lovelier Hermia.