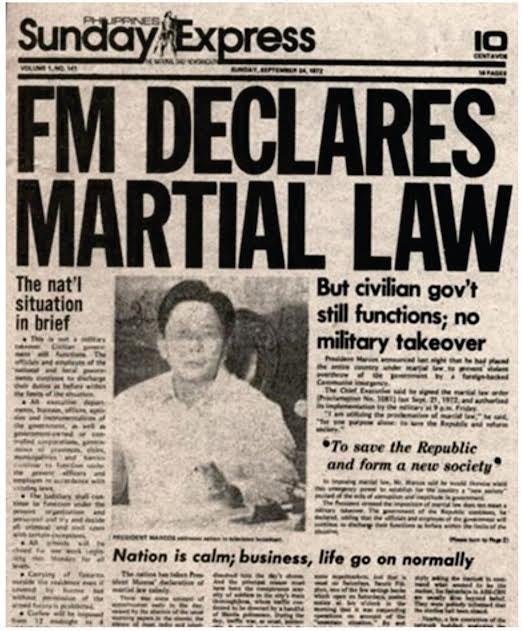 Martial law was officially in effect in the Philippines from Sept. 21, 1972 to Jan. 17, 1981, when it was ostensibly lifted. In reality, then President Ferdinand E. Marcos still reserved decree-making powers alongside the elected Batasang Pambansa.

Thousands would disappear, or were tortured and/or summarily executed, under this period. Among the rights that were curtailed was freedom of expression. Anyone who had anything to say or even whisper against the administration risked getting arrested.

Playwrights and theater artists learned and developed various means of expressing their dissent against the regime.  The Cultural Center of the Philippines’  Encyclopedia for Philippine Art lists at least 19 different theatrical forms used during the period. Some took the form of allegory, while others were more direct.

Here is a sampling of 14 plays that directly tackled specific people, events or issues during the martial law years, mostly written during the same period but including those that were written in the years after, arranged chronologically.

This play is considered the first “dula-tula” (literally, “play-poem”) to be performed. As the narrator read the poem, one
actor performs the role of the ordinary citizen Juan de la Cruz during the early years of martial law who gets frustrated at every turn until he runs off to the mountains to join the rebels.  Another actor played all the other characters, including a bus conductor, a wall, sea waves, a bishop and a soldier.  The convenient form developed by the University of the Philippines (UP) Repertory Company allowed portability of the play since a minimum of personnel, equipment and props were required. Many other plays were later developed using the same form.

First performed by the UP Anak-Tibawan under the direction of Jonas Sebastian, this three-act realistic play dramatizes the travails of the residents of Barrio Labak, a community beside a garbage dump site in Tondo. The play’s characters are helpless against the men and institutions that oppress them, and only Bino refuses to buckle down without a fight. He chooses to leave his family to join a band that steals from the rich to give to the poor, hoping to find a solution to the suffering of his community. In the end, his death serves as the “alipato” or spark that ignites revolutionary fervor in Barrio Labak.

Structured similar to the Roman Catholic Mass, this prizewinner from the Palihang Aurelio V. Tolentino was first produced by UP Repertory Company under the direction of Behn Cervantes.
In the play, relevant biblical passages and hymns were incorporated in the lines that drew from current issues and events. Mass participants are representatives of peasants, workers, students, tribal minorities, urban poor and professionals, interacting with the priest as they relate their everyday struggles. The priest starts out as a dispassionate observer but is transformed at play’s end, meaningfully changing from liturgical garb into the attire of the masses, tying a bolo to his waist to show his union with the people and his acceptance of his role as a coworker and liberator. The play was performed hundreds of times in various places, and is also considered among the reasons for the subsequent arrest of its playwright and director by the military.

In this play—the first play of Villanueva to be staged—the lives of burlesque dancers living and working in a decrepit theater in Manila are paralleled with those of workers staging a strike in protest against oppressive conditions. Produced by Dulaang Unibersidad ng Pilipinas (DUP) and directed by Jonas Sebastian, the play incorporated many of the slogans and songs of the revolutionary movement. In the end, the burlesque dancers and workers are joined by students in going against the oppressors, which include a corrupt mayor and his equally evil chief of police.

This is a devised work that centers around government operations in Mindanao in the 1970s that resulted in the displacement of lumad and the deaths of many. Residents of the local communities learn how to fight the multinational companies and their military henchmen. The production fuses news reportage with dramatized scenes, accompanied by a live musical score using native indigenous instruments directed by Edru Abraham.

Juan Tamban came to be known as the typical “Peta play,” a well-researched piece based on real-life events that portrays contemporary social problems with accuracy and insight, combining realism and nonrealistic styles (particularly the use of a Chorus), the better to convey to the audience the immediacy of the situations presented and the necessary actions that need to be taken (read: unity among society’s various sectors against the oppressors).

The play follows the story of a boy named Juan Tamban (played by Toffy Padua) who was reported in the newspapers as eating cockroaches and lizards to attract attention. A social worker, Marina (C.B.Garrucho) takes up his case and, in the process of investigating the case as part of her master’s thesis, comes face to face with the reality of the boy, his family and environment, society and herself.  Directed by Joel Lamangan in its first staging, the play won second place in the 1979 Don Carlos Palanca Memorial Awards.

Drawing from his own experiences as a political detainee, Maranan relates the story of a woman in prison who suffers even more as her case progresses and the powers that be turn a blind eye to  the cruelty imposed by their subordinates, some of whom are prisoners themselves. While the situations paint a vivid picture of the experiences of political detainees, including the iniquities of the judicial system, the events of the play draw parallels to contemporaneous events, using a variety of theatrical techniques that range from realistic staging to shadow play. A first prize winner in the 1979 Don Carlos Palanca Memorial Awards for Literature, this production of the UP Repertory Company was directed by Behn Cervantes.

(Next week: 7  more landmark plays on Martial Law and its aftermath)

Dennis N. Marasigan is a director, writer, lighting designer, actor, producer, teacher and learner. A member of the theater arts faculty at MINT College, he also works extensively in theater, film and television.