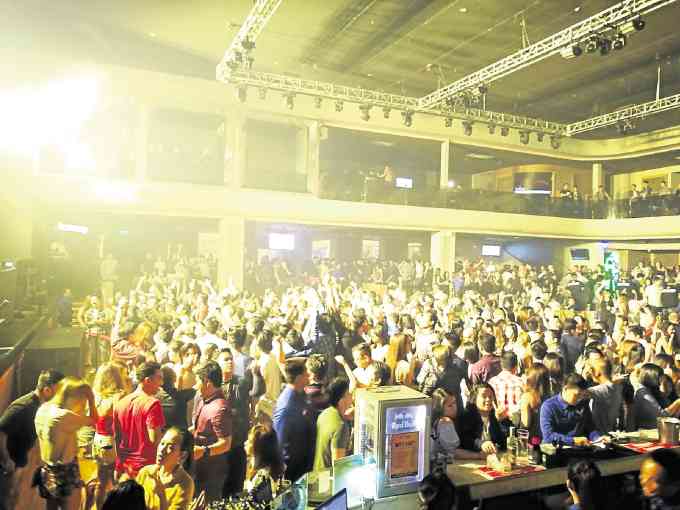 Club scene in the time of Duterte

PAST midnight last weekend, the doors of a popular nightclub in Bonifacio Global City (BGC), Taguig, were tightly guarded by burly bouncers and uniformed policemen with their K-9 in tow.

More cops were seen roaming around; there was even a help desk manned by a rookie policeman.

Inside the popular nightclub, one of the bouncers said, “The crowd is late tonight,” to explain why the place was not yet bursting at its seams.

Two DJs played electronic dance music, the beats dribbling and then ascending into a climactic high—the moment when the crowd usually feels euphoric before screaming in unison.

Many in the crowd looked happily tipsy, dancing with abandon, drink in hand. A young guy demonstrated his dancing skills while a few Caucasians watched him in awe.

It didn’t seem like the revelry was drug-induced, although it was difficult to tell which one in this party was loaded or not.

This was the type of crowd whose drug of choice is not shabu, but could either be cocaine or ecstasy—the latter gaining notoriety after having been identified as the party drug which was laced with other synthetics that killed five people on May 22 at a rave.

Unlike the scores of poverty-stricken shabu addicts being hunted down daily in President Duterte’s war on drugs, the “substance abusers” among the rich are perceived to be above the law.

For decades, the persecution of drug users in the country has exempted the upper class, which, at one time or another, included children and relatives of top government officials, scions of business and industry, as well as award-winning celebrities.

But today, more than three months since Mr. Duterte launched his all-out war on drugs, the word is that even the normally untouchable members of the elite are feeling the heat.

Bars and clubs are said to have suffered from low sales and attendance “because people felt unsafe to go out, even if they don’t do drugs, for fear of ending up as collateral damage,” one of the owners of a number of high-end establishments told Lifestyle.

The drug war—which has been criticized in local and international media for its lack of long-term policy and an ultraviolent method that has claimed over 3,000 lives—has now reached the hangouts of the privileged.

A few years ago it was easy to notice when people would go in twos inside the cubicle of the restroom of a nightclub in a casino near the airport—to snort some coke. It became so blatant that management put up a sign to prohibit such acts.

Now the BGC nightclub has its own sign hanging prominently near the main entrance: “Zero Tolerance for Drugs: Drink, Dance & Have Fun.”

“We sent a clear message to the public that club and bar owners do not condone nor tolerate illegal drugs in their respective establishments,” said a co-owner of the BGC nightclub.

“We get our income from alcohol sales. People on party drugs do not drink alcohol, only water.”

He added that preventive measures taken by club management include: all employees undergoing drug test; police presence in the premises; additional security and frisking of customers upon entry; and sufficient CCTV cameras.

In any case, they know what to do after interpreting the warning sign—drink, dance, but don’t do coke or “E” in BGC./rga