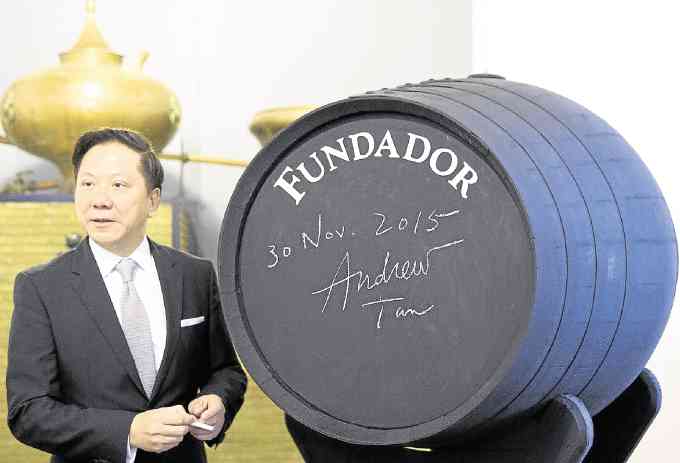 DR. ANDREW Tan at the Bodegas, after his acquisition in 2015

FOR a change, some good news in these days of gore and killings.

We don’t remember a time we spent waiting with bated breath for the Philippine flag to unfurl and flutter in the wind. This was exactly what we did, one day last August, in Toledo, Spain.

In a van with the rest of local media, we waited with childlike excitement for the Philippine flag to flap in the wind. And when it did, click. A perfect Instagram post. A proud Filipino moment.

This was at the gate of the largest vineyard in Europe, the Fundador vineyard in Toledo, now the Emperador vineyard, after Fundador, the iconic and oldest brandy in Spain, was acquired by Grupo Emperador Spain S. A., a company owned by Emperador, Inc.

This is the story of the Filipino’s acquisition of a brand that is an icon of Spanish culture and heritage, given greater significance when seen in the context of our colonial history under Spain.

Today, at the gate of Emperador’s Fundador vineyard in Toledo, the Philippine flag flies proudly alongside that of Fundador.

Emperador, Inc. is the liquor unit of the conglomerate Alliance Global Group, Inc. of the Philippines, owned by Filipino self-made billionaire Dr. Andrew Tan. It is the world’s largest brandy company, its products now distributed in 40 countries in Asia, North America, the Middle East and Europe.

The acquisition in 2015, from Beam Suntory, of the Spanish brandy and sherry business in Jerez, for P13.8 billion (275 million euros) held special meaning for Tan.

He loves to recall, and which he told before the employees of the newly acquired Fundador in 2015, how Fundador first became a part of his life. He was a new college graduate then.

“My family was celebrating my college graduation when I saw my father opening a bottle of brandy. This was the first time I drank a glass of brandy and I learned that it was Fundador. That moment was so memorable to me.

“In 1983, I visited Jerez for the first time to know more about brandy. Fundador was my inspiration. That’s why I named my brandy Emperador, inspired by the name Fundador.”

Perhaps not known to many is the fact that making brandy has been a lifelong obsession for Tan. He added, before the Fundador employees, “the brandy business has always been my passion. I have dedicated my whole life to brandy making. That is why today, I can say that I have achieved my greatest dream. This dream is about having Fundador become part of Emperador. Together, we will make the world’s largest brandy company.

“A new era for Fundador has just begun. This company was born almost 300 years ago. I have come here to grow and revive the glory of brandy and sherry making in Jerez, and to continue the legacy of Bodegas Fundador.”

Indeed, that must have been quite a moment: a self-made

Filipino billionaire who, fueled by a vision, if not obsession, and by dint of hard work—a conqueror’s thirst for entrepreneurial adventure, no less—has planted the Philippine flag in a centuries-old institution of Spain. (Fundador was founded in 1730.)

And—the acquisition was welcomed by Fundador. At the turnover last March, Jorge Domecq, managing director of Grupo Emperador Spain and descendant of the founders (Pedro Domecq Lembeye in 1794, Juan Pedro and so on down the line), underscored the significance of the purchase.

He said, “With the combined brandy production facilities of Emperador and Fundador, the world’s largest brandy company is born. We now have almost 1,500 hectares of vineyard land in Spain, around 1,000,000 sq m of cellar and bottling facilities, and four distilleries worldwide.”

Winston Co, president of Emperador, Inc., upon the acquisition, stressed the global reach of the company: “In our pipeline are several proudly Philippine-made products that we intend to introduce to the international markets.”

And thus, on that summer day last August, the gates of the largest vineyard in Spain, Daramezas in Toledo, opened for the Philippine media. We toured the vineyard on the day of harvest. Its staff oriented us on the more modern method of brandy production, and we had a late breakfast in its centuries-old castle.

We visited the bottling plant which yields around 15,000 bottles a day, and the Bodega Fundador which houses around 30,000 barrels, among them one signed by the late President Cory Aquino on her visit to Spain. At the bodega is the Fundador museum which houses the history of this revered Spanish brand, from photos to artifacts. The photo of Andrew Tan now hangs alongside that of Pedro Domecq.

We paid a visit to Jerez Mayor Carmen Sanchez in the medieval encampment, and to the El Consejo Regulador (a regulating council of  brandy manufacturing).

Another highlight of the trip, back in Madrid, was a visit to Torre Espacio, the 53-story glass monolith which Tan bought recently for 550 million euros.

A side trip to the monument of Jose Rizal in the Avenidas de Filipino proved to be a fitting end to the Fundador tour. The monument is a replica of the Rizal Monument at Rizal Park, but much smaller in scale.

Filipino ilustrados such as Dr. Jose Rizal went to Madrid in the 19th century to study, to imbibe the philosophy and culture of western civilization and in the process, gleaned the ideals of freedom, liberty and patriotism which planted the seeds of the Philippine revolution.

Today, centuries later, a Filipino entrepreneur returns to Spain to invest and fulfill a global vision.

Indeed, Philippine history, with its exciting economic footnotes, throbs from day to day. And sometimes, the day brings good news, such as Emperador’s journey to Spain.

Emperador Brandy is produced in the most modern vineyard in Spain, considered also the largest in Europe—land that was used since prehistoric times, the vineyard starting in the 18th century.

It was a glorious summer day in Toledo when we visited it last August, its gates with the flags of the Philippines and Fundador opening to reveal acres and acres of vineyard—a pale green carpet that stretched to the horizon. The men in red shirts—a color that stood out in this greenish brown sea—were harvesting the grapes.

We were allowed to taste some—they were sweet, small as they were (the Arien variety, the most cultivated in the world).

This technology not only monitors the weather but also designs and analyzes plots and rows in the vineyard. A highly mechanized pruning method is also used, strictly following a specific vine length. It allows for an automated irrigation and monitoring system. Advanced sensors are positioned all over the vineyard to monitor the state of the soil, atmosphere and the crops.

Drones are used to monitor the vineyard.

The vineyard runs along the Tajo River, the longest river in the Iberian Peninsula stretching from Spain to Portugal.

What the group found interesting was the surviving water reservoir from the Roman times, a relic that stands out amid this wild foliage.

Toledo was the medieval capital of Spain. It is in La Mancha, the biggest wine-producing region in the world. Its weather conditions are said to be ideal, with a hot and dry climate for plant vigor.

Jerez Mayor Carmen Sanchez (extreme right in left photo): “You can put brandy in a bottle but it’s impossible to put the magic of Jerez in a bottle. This is the best time to visit and see—the harvest festival, the horse show, our history and the flamenco.”

It’s like being in another world, to be cocooned in these endless rows of barrels. Its architecture following a Moorish influence, the bodega is 25,000 sqm, with about 30,000 barrels, 1,100 columns.

Brandy is the product of ageing wine spirits or holandas —the result of the distillation of young wines. The holandas and spirits in these cellars in Jerez de la Frontera are aged in American oak casks that have contained aged sherry.

The media group, expectedly, was drawn to the barrels signed by famous celebrities, royalty and dignitaries who have visited the bodega. Among them was then President Cory Aquino.

The company that would be Fundador was founded in 1730 in Jerez de la Frontera, initially for the production of sherries. When Pedro Domecq Lembeye inherited the business from his uncle in 1794, he set up a highly skilled organization, and the company dominated the sherry trade.

In the 19th century, his descendant, Pedro Domecq Loustau, was commissioned to produce 500 hogsheads of an alcohol of exceptional quality. He liked the challenge.

After two years, he produced the exceptional alcohol, only to find out that the customer who made the order reneged on his commitment. Pedro then ordered that the huge amount of alcohol be stored in American oak casks in the bodega.

After five years he asked for the sample. The result: a golden liquid with strong aroma, the brandy.

In 1874, he launched the first brandy in Spain.

This glass monolith in Madrid was bought by Dr. Andrew Tan in 2015. It has 53 stories, designed as an intelligent building, its penthouse offering a breathtaking 360-degree view of the city. It is in a modern district known for its four skyscrapers.