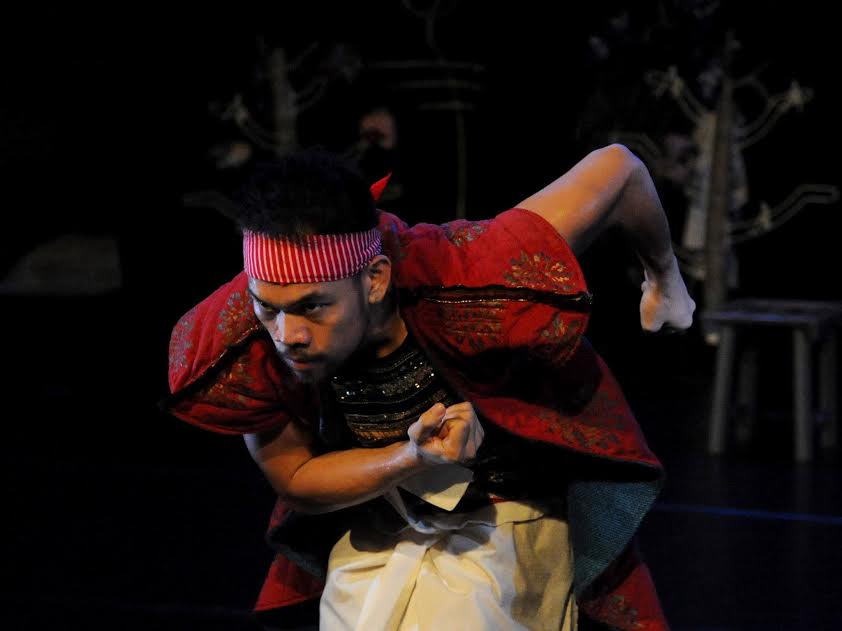 “Nganga ako,” Carlon Matobato says, when he saw a movement-led staging of “Mahabharata” last year at the Peta Theater Center. “The performers were so strong and their lines were so clean. I was excited and scared.”

Scared because he’d soon be part of the show’s next installment. He had auditioned for Japanese director Hiroshi Koike and won the slot as this year’s only Filipino in the multinational cast.

Hiroshi Koike Bridge Project’s “Mahabharata” began in 2013. Chapters are created annually in a different Asian country; it’s intended to conclude with a full-length staging in 2020.

Last year’s “Part 2.5” included Manila in its performance tour. This year, Matobato worked with performers from different countries for “Part 3,” which was recently staged in Indonesia.

The ancient Indian epic deals with two warring branches of the Bharata dynasty battling for the throne of Hastinapura. (Dulaang Unibersidad ng Pilipinas staged the musical adaptation “Ang Nawalang Kapatid” in 2014, written by Floy Quintos and composed by Ceejay Javier.)

Matobato played the roles of the Hindu god Krishna and the warrior Karna.

The production combines different Asian dance forms and recruits performers with backgrounds in all manner of dance (traditional, ballet, contemporary) and movement (circus) so they can contribute to the process.

Rehearsals had started without Matobato, as he was still acting in Philippine Educational Theater Association’s “Rak of Aegis.” But, with his dance experience and skills, it wasn’t too hard to catch up.

“Malaki ang utang na loob ko kay National Artist for Dance Ramon Obusan. He was my mentor, he honed me in Philippine dances. I knew my knowledge of these forms would become useful one day.”

Matobato started performing when he was a student at Lyceum of the Philippines University. “I was part of our college theater group Tanghalang Batingaw and I also joined the dance troupe.

“That’s also when I joined Ramon Obusan Folkloric Group. Theater and dance converged at the same time in my life.”

Theater and dance, together

He started choreographing while he was part of Tanghalang Pilipino’s pool of resident actors, “while learning from respected theater gurus.” Matabato then joined Jay Cruz’s Dancing Wounded group. “Jay was my second mentor, teaching me a deeper understanding of dance.”

He’s been with Peta since 2005, performing, choreographing, teaching—and collecting awards for his efforts, such as Philstage Gawad Buhay Best Choreography nods for “Ismail at Isabel” and “Care Divas.” Productions he’s choreographed or acted in include “D’ Wonder Twins of Boac,” “Lola Basyang,” “Zsazsa Zaturnnah Ze Muzikal” and “Katy!”

This wasn’t his first international production, but it was particularly challenging. Prompted partly by a complex piece of costume, he had to “completely master the performance space, even with eyes closed.”

“The masks made me see very little. I had to dance, sing and act without seeing much of my surroundings. I hoped I wouldn’t bump into my castmates!”

“I ignored the calluses and wounds on my feet. The roles were wonderful but not easy. I put a lot of heart into it. I usually cried during rehearsals because I was so moved. It was important that I played these roles well.”