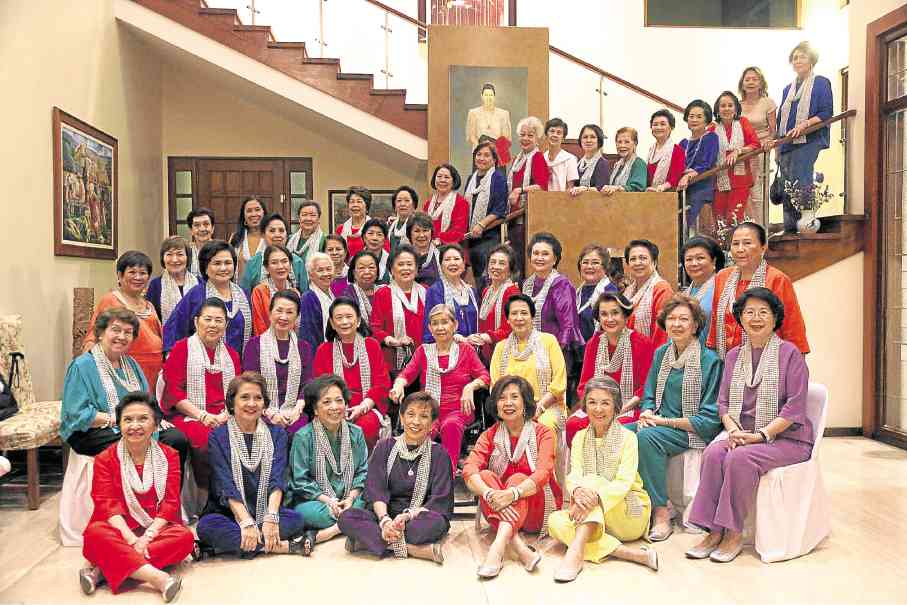 All hail to our beloved Assumption!” That was the resounding cry of hundreds of Assumption College jubilarians as they celebrated Old Girls’ Day and the phenomenal Velada.

Assumption’s Old Girls’ Day is an annual celebration that culminates with a grand Velada, which is hosted by the lead alumnae batches for the year, the Silver and the Gold jubilarians. Of course, aside from the 25-year and 50-year celebrators, each homecoming also celebrates batches every half decade.

Assumption blood runs through generations of Rufinos. My mother Marixi Rufino-Prieto and I are lucky to celebrate the Velada together every five years, since we graduated 25 years apart. This year, my Jade batch matched up with her Diamond batch.

At the early planning stages of the program, several members of Class 1956 and 1981 thought of having a joint performance to create an even stronger bond of the Assumptionista family tradition. Wonderfully directed by direk Freddie Santos and choreographer Batche Tan, the joint performances melded the main performances of the Jade and Diamond batches.

With several other members having three generations of Assumptionists in the family, a “Bejeweled” performance was added to the show, featuring the jubilee batch of celebrators. Silver Jubilarians and twin sisters Jackie and Jennie Verano spearheaded this performance, as they are part of seven Geronimos who are co-celebrators in one jubilee year.

The inter-jubilarian production numbers bonded mother and daughters, sisters, cousins and niece-aunt members during practices and dinner parties. The Assumption tradition in families is the true spirit we learned from St. Mother Marie Eugenie’s wisdom and life lessons.

Before the main Velada show, a Mass was celebrated where past Assumptionistas donned the iconic Assumption red plaid uniform. The Old Girls’ Day continued with lunch after the Mass, with the alumnae enjoying reminiscences of their high school days. The presentation of the donations for the Assumption Alumnae Association (AAA) opened the main show in the afternoon.

One of AAA’s biggest fund-raising events is the annual golf tournament, which was held last September with the theme “Golfing for Gold.” It was a resounding success, raising considerable funds for the 13 Assumption Mission Schools.

For our Assumption HS ’81 batch, the Red Charity Gala is the annual charity event that helps raise funds for our foundation. Spearheaded by classmates Popsie Gamboa and Girlie Sison, our class has, over the past 12 years, provided educational and medical assistance to countless children all over the country. Just last year, the Foundation provided 20 homes to families in typhoon-ravaged Samar.  This year, we will provide a children’s library to the same community in Mercedes.

The Assumption HS ’81 Foundation continues to help and support socially relevant programs. Bonded members of the batch continue to forge new paths for the betterment of humanity. There is no small part, as each classmate contributes what is truly essential—love and compassion.

Next year, 2017, we will be celebrating the 200th birthday of our founder St. Mother Marie Eugenie and the 50th anniversary of the Assumption Alumnae Association. The AAA’s golden anniversary theme, “Making a Difference in the Lives of Others,” captures the continuing presence of the Assumption spirit in the school’s graduates.

St. Mother Marie Eugenie would have been very proud to see her progeny bring to life her vision.

AAA assistant secretary Marlu Villanueva-Balmaceda shared that the association has started preparations as early as last year. Their golden goals are the virtues that best describe Assumption alumnae—optimism, generosity, compassion, knowledge, spirituality and soulfulness. These values are consistent with an Assumption education.

As we all say when we sing our school hymn, “Assumption gold and white and blue—to your teachings keep us ever true!”