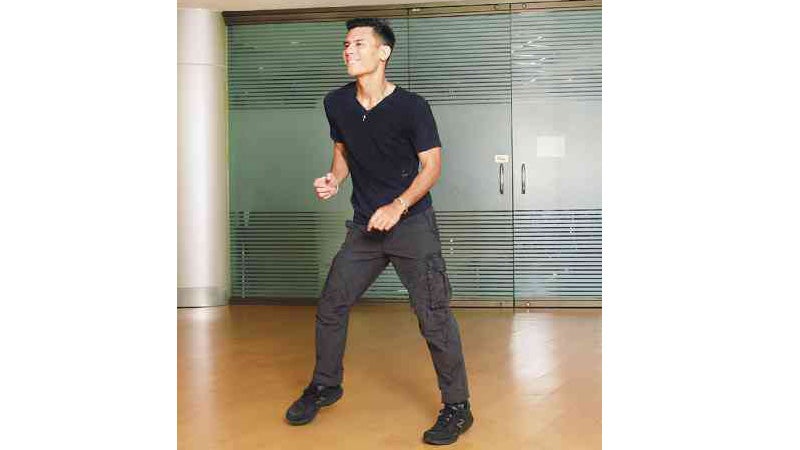 You’ve got the groove, sir!” the hip-hop dancer-teacher told retail scion Donnie V. Tantoco. Make that “Sir,” as Tantoco was recently conferred a Knight of the Holy Sepulchre, the Roman Catholic order of knighthood.

“The old man hip-hop,” he said with self-deprecating humor.

Unlike locking, popping and street dance, hip-hop soul borders on the lyrical style, which focuses on expression. Such dances are characterized by shoulder movements, glides, rhythmic footwork, lunges and hip raises set to R&B and down-tempo rap.

His journey to hip-hop and wellness was intertwined with the business. It started in 1998 during the planning of the Shopwise Christmas party. His colleagues egged him on to dance.

Self-conscious about his lack of skills, Tantoco turned down the request. His associates challenged him, saying that he wasn’t living up to his own value of integrity.

Tantoco promised he would dance only if Shopwise hit P20 billion in sales, a target which seemed farfetched then. When Shopwise eventually posted P20 billion sales after 15 years, colleagues reminded their boss of his promise.

His wife, Crickette, organized his training and rehearsals. Tantoco immersed himself in hip-hop by practicing with the Manoeuvres and a topnotch choreographer.

Then he got a vocal coach and recorded a “Disney Dudez” medley in a professional studio.

In costume, Tantoco ultimately danced and sang to his own voice recording in the 2013 Christmas program. He also shared the stage with Gary Valenciano.

“That was probably the most expensive three-minute performance ever,” he recalled.

He has since been shaking and shimmying under the tutelage of hip-hop dancer-teacher Zaida Baaya, who has become a close friend.

Before the dance lessons, Tantoco was consumed by work and did the rounds of stores even on weekends. However, he felt something was lacking. “I felt like a one-dimensional person.”

He pioneered the family’s Royal Subic Mall, the high-end duty-free shopping center, which was flourishing. But the business suffered from the government’s removal of the $200 shopping privilege, the Asian crisis and local politics.

“We stayed alive because we held ourselves accountable for our employees, and for paying every centavo of the loan,” he pointed out.

“We took an across-the-board pay cut so that we wouldn’t lay off anyone,” he added. “Everybody suffered, but we stuck together. You’ve got to live to work for something bigger than yourself. Make sure that your people don’t burn the candle at both ends.”

Under Tantoco’s stewardship, Royal Subic Mall paid off its P500-million peso loan. His grandfather, Ambassador Bienvenido Tantoco Sr., founder of the Rustan’s Group of Companies, was impressed, and inspired him to open Shopwise.

“From zero sales and zero people, Shopwise went on to hire 3,000 employees and post P23 billion in sales,” he said.

Tantoco was then tasked to improve the performance of Rustan’s Supermarket and pay back its loans. He motivated his associates to learn more about their customers for better engagement and to become more committed to the company’s goals.

His leadership achievements were recently acknowledged in the Order of the Holy Sepulchre ceremonies at the Archbishop’s Palace. Historically, this knighthood was given to armed knights during the Crusades who protected the Christian sites in the Holy Land.

In today’s context, the warriors are fighting a different battle. “You can swim with the sharks without becoming one,” said Tantoco.

He summarizes the corporate culture with “Wisdom,” an acronym for Winning, Integrity, Sharing, Daring, Outstanding and “Malasakit.” Still, Tantoco underscored that the success of the company lies in teamwork.

Wearing another hat as president of Rustan’s Commercial Corp., he faces the challenge of strengthening the 65-year-old Rustan’s Department Store amid an intensely competitive and volatile market.

“I have to stay as fit as possible for family and work, and make myself spiritually strong,” he said.

Tantoco recounted how his health had been compromised by overwork. For eight years, he suffered from bleeding ulcer, gout and chronic acute gastritis, which required eight maintenance medicines, as well as two endoscopies and two colonoscopies a year.

Crickette has been a big influence. She got him to undergo a food intolerance test. After eliminating the food that made him sick, his ailments disappeared; he slept better and lost 30 lbs.

Tantoco has been simplifying his life by lessening his work load and spending more time on things that matter.

“One of the things that I committed to my wife is that I belong to her from Friday night until Monday morning,” said Tantoco.

The couple even have a monthly “pajama day,” which is basically lounging around.

On weekends, the hip-hop teacher comes to his house instead of him going to the dance studio.

On weekdays, he starts off by jogging to clear his mind and rushes off to his hip-hop class.

“I look at life from the physical, emotional, mental and spiritual perspectives. Now I’m dancing, eating right and reading the Bible every day for one hour, doing self-examination. I can’t be whole for others if I’m not whole with myself,” he said. —CONTRIBUTED